Charles Lancaster patented the oval bore rifling, although he wasn’t actually the inventor.  I purchased a cased Lancaster double rifle in excellent condition (serial No. 3076 for 185X) and then acquired a complete wreck of a very similar gun.  The stock had been burnt, the locks very crudely replaced with rebounding Stanton locks  from a breech loader extended to fit the opening, and a major crack running right through the action area.   I didn’t take photos of the ‘before’ state, but the work involved splicing a new heel on the butt – which my friend Dick did for me as my woodwork was not so hot ( its better now) and some additional woodwork that I did manage, including replacing almost all of the wood between the two locks.  I made a pair of new lockplates, fitted with the modified Stanton insides, and made  new main springs.  I engraved the lock plates as an exact copy of the locks on my ‘good’ Lancaster.  The good Lancaster had a circular patch box but there wasn’t one on the wreck, but there was a nasty burn mark on the stock where a patch box would fit, so I made one – but rectangular to cover the entire burn mark and engraved it to match the good one – keeping the circular reference of the original.  I’m not sure I engraved the lion deeply enough, but otherwise I’m pretty happy with it – it shuts with a suitable snap.   Stock is finished with dozens of coats of  ‘Slacum’ – a mixture of boiled Linseed oil, beeswax and terbine driers, put on and then rubbed off as it goes through the jelly stage.  I had a reasonably suitable case that fitted well, which I modified inside, and made a set of tools with ebony handles.  I haven’t attempted to pass this rebuild off as original – the locks and patch box are engraved with my name and the year to avoid confusing future collectors and the case carries a ‘confession’ notice!

These pictures are what I have to hand – I’ll try to take some better ones sometime!  Click on the pictures to enlarge to full screen. 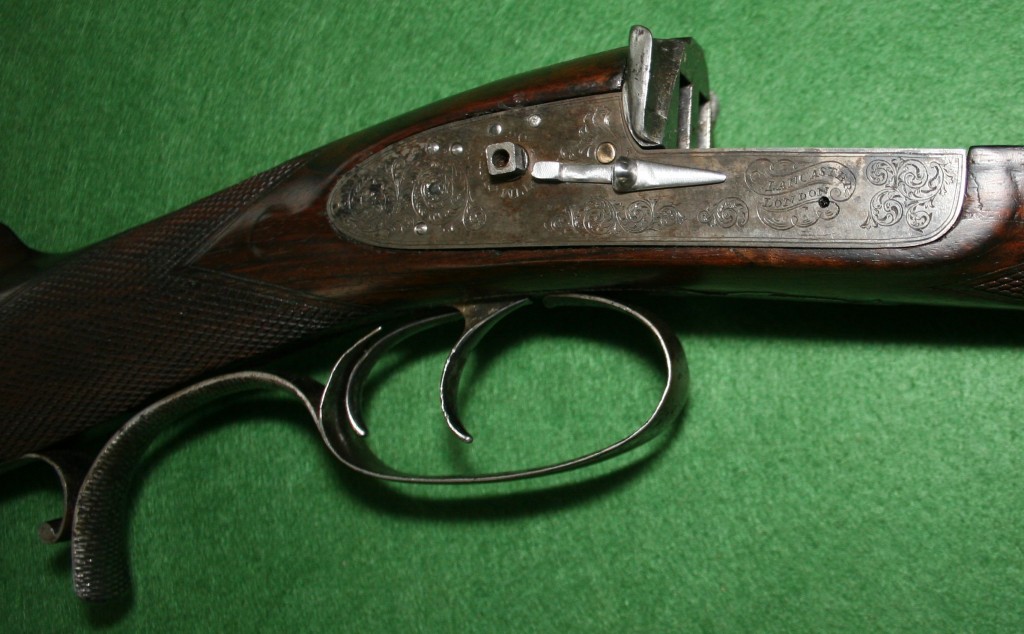 The locks are still waiting for the cocks – being cast from the ‘good’ Lancaster cocks. 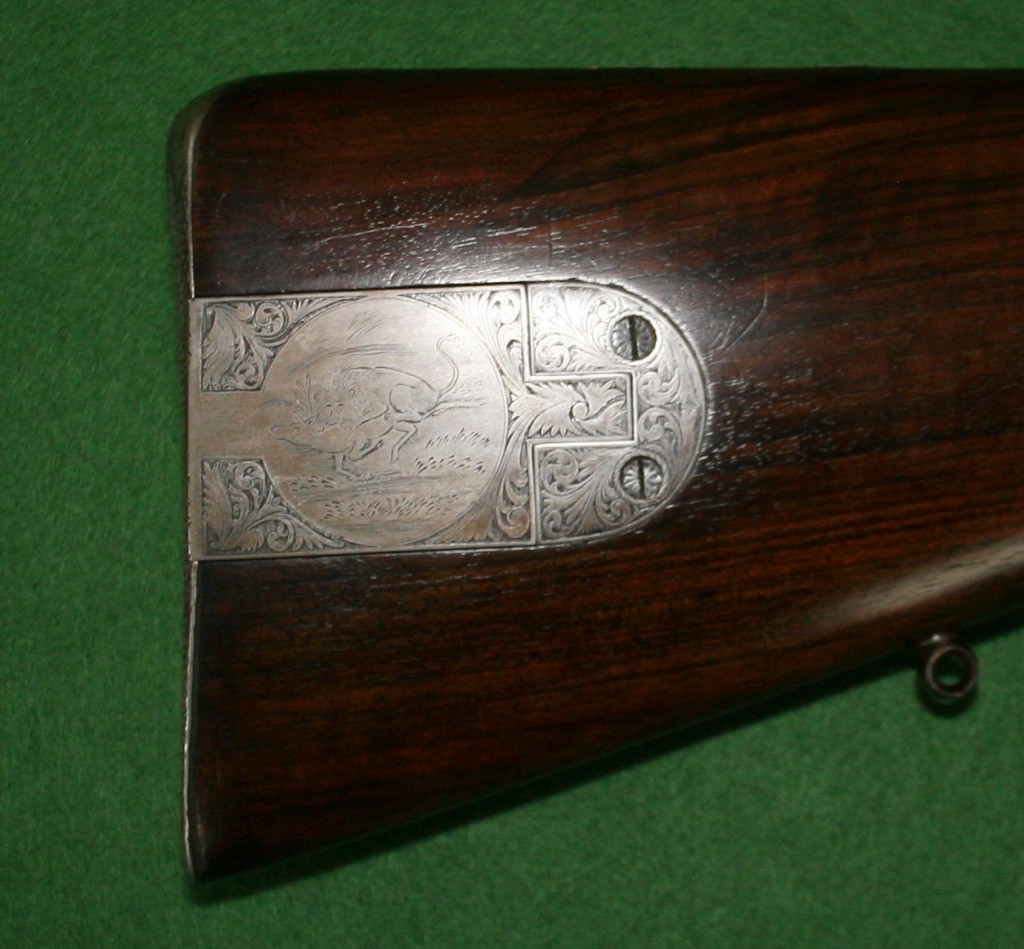 Its difficult to see that the top of the butt has been spliced – Dick did an excellent job grain matching.

Pulls are made by smoking the part and lifting off with clear, wide cellotape. 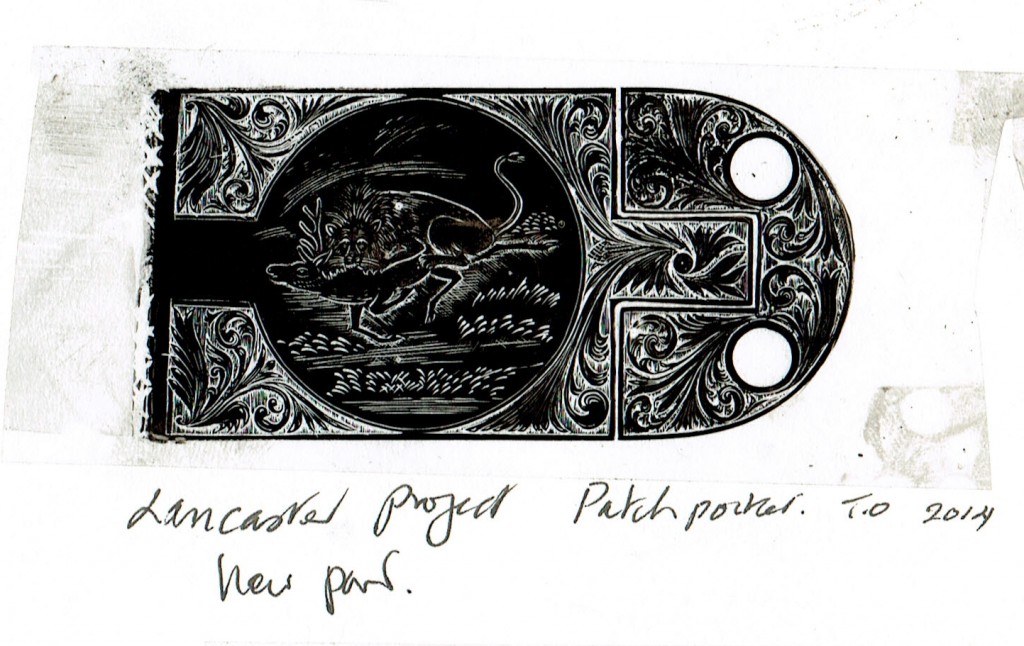 At this stage I hadn’t put the ‘wreaths’ round the screw holes as I hadn’t decided what would look best. The lion and the deer look a bit like a large cat sitting on a pile of deer parts – but that was the style of the engravers of that period – its not such a bad copy – see below! 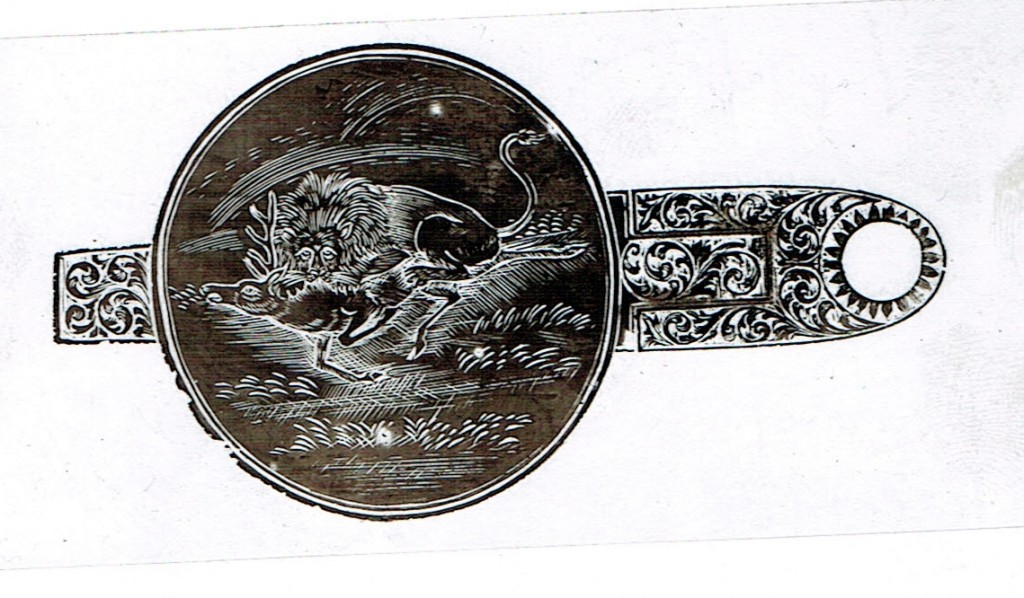 This is a pull from the original Lancaster No 3076  – its a better pull as its a lighter smoke.

I changed the style of the scrollwork as it didn’t look right in the new spaces when I tried it out.   My border engraving is not perfectly symmetrical as I was doing it freehand, whereas the scene and locks were transfers from the good Lancaster.   Both fill-ins are raised pattern engravings with cut away backgrounds as distinct from the picture and locks which are simply incised lines  on the flat.  Traditionally most gun engraving of the period was incised, except for the false breech which was usually cut away background engraving –  modern gun engraving  now mostly has cutaway backgrounds.  It took me a while to get the hang of going from one to the other, as it requires thinking in reverse.

Pull of the new lock engraving – unevenness of  the Lancaster lettering is copied from original!

Initial stock repair  – I later replaced the damaged wood surrounding the front of the butt tang.

Ebony handled tools to match the  case – the design of  turnscrew is a bit wrong and I didn’t polish the handle well enough – I aged the tools by reverse electrolysis, but overdid the turnscrew as I got distracted  and its a bit pitted – put it down to experience!

I am now  (Oct 2016) able to report that I have got the castings for the cocks made from moulds taken from the original Lancaster rifle – it has taken since mid 2014 but they are good and I’ve recut the engraving on them – it only remains to fit them to the tumblers and make tumbler screws ( 5B.A. I think)  and fettle the safeties that I left oversize awaiting the cocks. 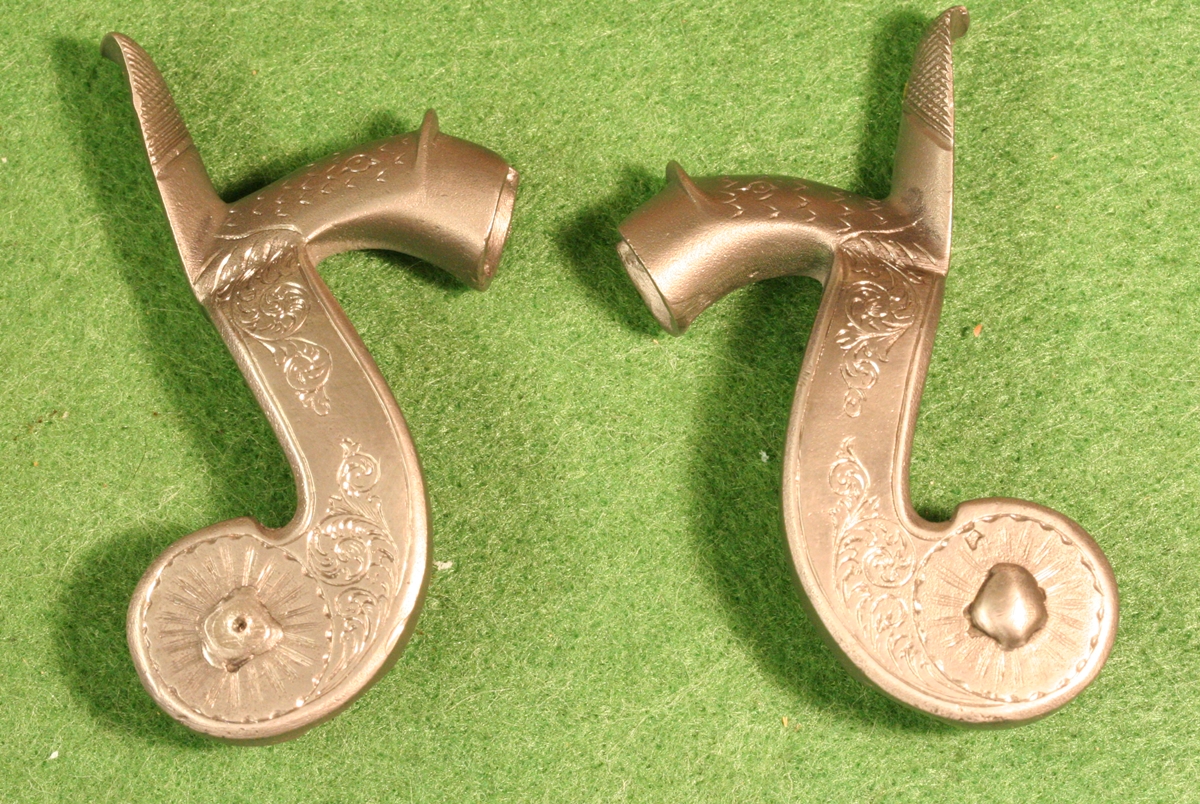