I was asked how touchholes were normally configured – I haven’t got many flintlocks and I haven’t dug out the touchholes of any of them, but I have done a bit of research…….

Some, my Henry Nock single percussion conversion is one that’s easy to see, have a tapped plug with a screwdriver slot opposite the touchhole  that allows access to the inside of the touchhole – I wasn’t able to shift it, but anyway it has had a barrel conversion fitted and now has a tapped hole (about 3/8 BSF)  for the conversion.     Early flintlocks  had a plain breechplug with a flat face tapped into the barrel, so the powder chamber went to the breechplug  face at full bore and the touchhole was just drilled through more or less against the face of the breechplug.  This was altered (Fig XXX) with a secondary chamber that was found to give a much better burn but slower ignition(?)  – this from the figure clearly had a faced touchhole in a dovetailed recess.  After Nocks patent (Fig XXX1) the breechplug extended beyond the barrel and had a powder chamber of about 6mm  to 10 mm  diameter extending for maybe 20mm (3/4 inch) into the block, with the touchhole  in a cross chamber at the bottom  with a screwed plug.  Whereas in the plain breeching the barrel wall was a reasonable thickness for the touchhole, with the thicker wall of the plug  – maybe 9mm (3/8 in)  there were two options, either to make the touchhole bigger on the inside  by counterboring from the opposite side of the plug  as in Fig XX1 or by screwing in a separate touchhole plug, or as in Joseph Manton’s patent No.1865 of 1792, to slim down the lock side of the breech plug and scalloping out the outside of the touchhole.  My Blair and Sutherland double flintlock  has a 6mm chamber in the breechblock with the touchhole coming in at the side not quite at the bottom – it has the Manton slimmed down breech blocks and quite a short touchhole ( 1 1/2 mm?) that opens out to about 2.5mm diameter where it intersects the side of the central chamber  – I don’t know whether it has a screwed plug – the outside face is Platinum or if there are screwed plugs opposite the touchholes as I haven’t had the breechplugs out – I got most of the information with a camera view from the muzzle..    Touchholes are subject to a lot of erosion, so were lined on the outside with gold initially – Fig XXX, and then from Platina (modern name Platinum) after 1805 .  I am not sure if solid gold plugs going through to the central chamber were used – I doubt it , but just  possibly Platinum ones were as the metal is harder and was at the time cheaper.   I suspect that the price of either metal meant that a skin of precious metal was put on the outside of the touchhole on less expensive guns.   Maybe someone can enlighten me?

Talking things over with Dick we thought that almost all the touchholes we see on guns that are precious metal are absolutely flush with the breech block surface and a perfect fit around the edges and  were clearly filed and polished in situ – we do not see any signs that they are anything other than perfectly circular – i.e. we don’t see the last thread coming through the edge – the metal of the touchhole is  also usually larger than one would wish to make a hole for a plug and gets nearer the edge of the block than one would choose to put a deep hole.  We don’t see any slot or holes to help screw the plug in with.   This suggests to us that any tapped plugs are separate from the external touchholes, or are brazed or soft soldered on to them, and the precious metal touchhole itself was hammered into the recess to give a very secure hold, possibly with a dovetail as in drawing XXXX and then finished flush.

The following pictures are the best information I have!  ( illustrations reproduced from (1) George, ‘English Guns and Rifles’ and 2 & 3 from  ‘The Mantons’   by Keith Neil and Back) 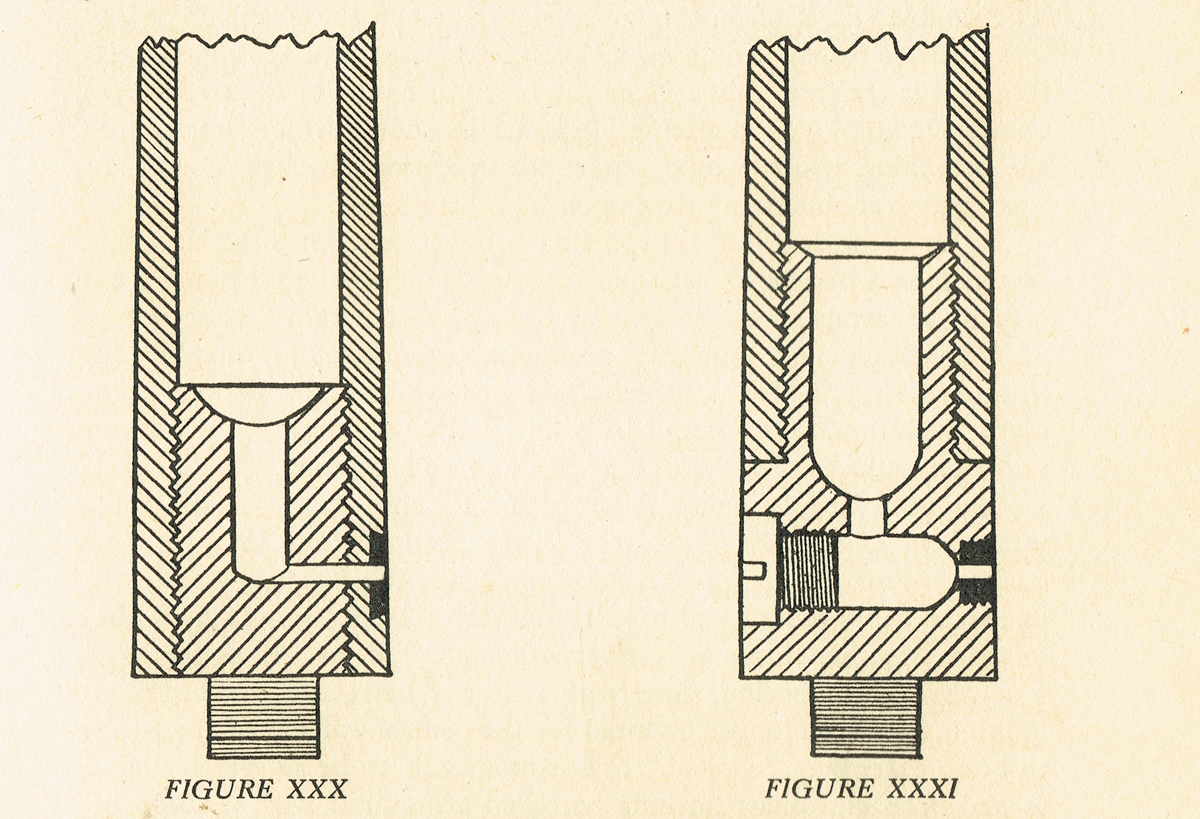 Improved breeching  Fig XXX over flat face gave better burn but slow ignition, Fig XXXI- Nocks patent of 1787 speeded the ignition. There are two factors at work here – the speed with which the main charge starts to burn aftr the trigger is pulled, and the rate at which the main charge burns.  Nock’s patent is in some ways counterintuitive because it introduces another seat of ignition, so its a chain, but the delay in the flame getting to the main charge is more than offset by the effect of the initial explosion in the sub chamber, which causes the main charge to ignite much faster.l

This is Joseph Manton’s patent of 1792 for the cutaway breech block showing a touchhole drilled directly  into the breech plug. 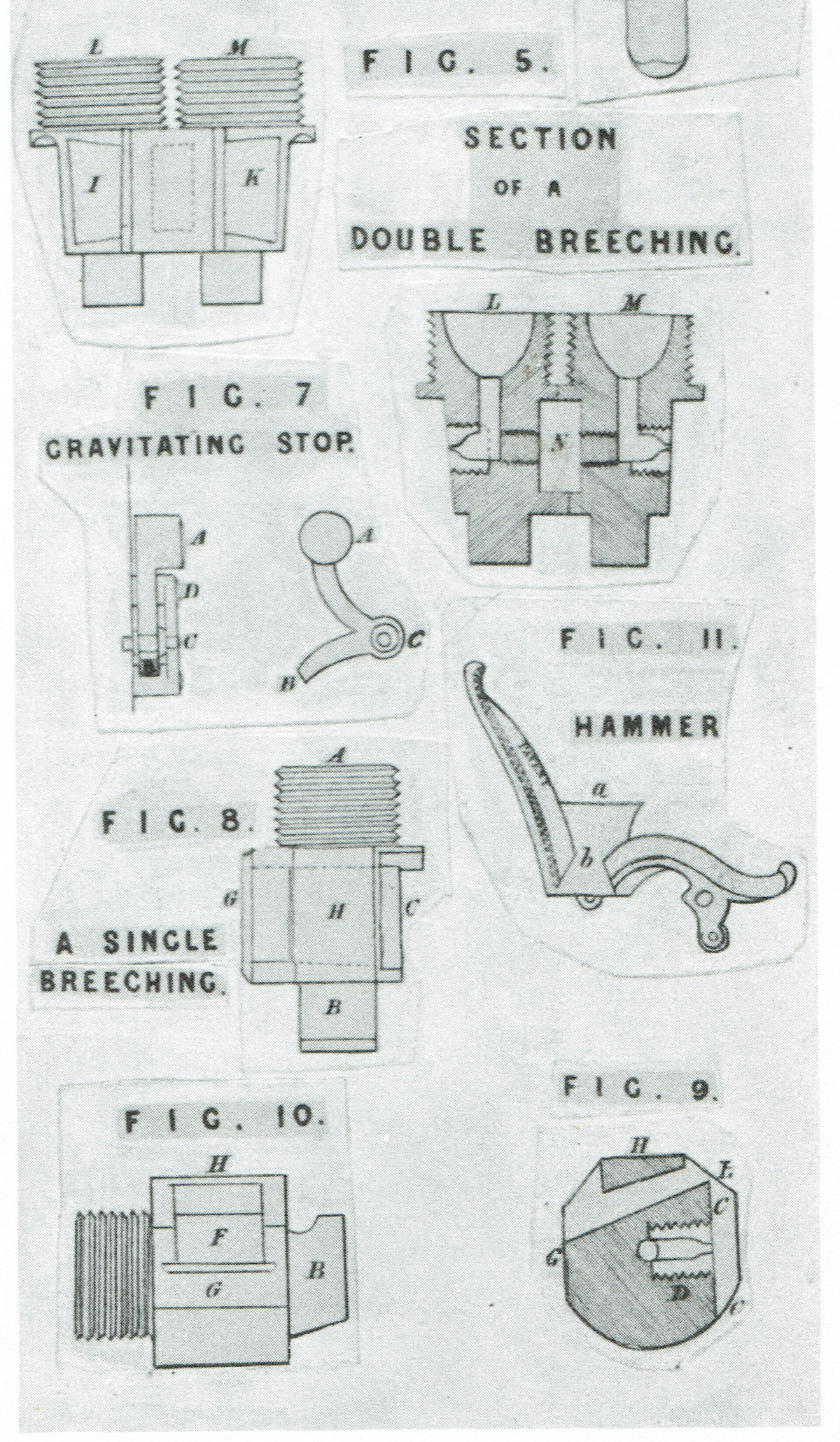 This is Joseph Manton’s patent  No. 3558 of 1812 for ‘gutters’ on his breeches to run off the rain!  But it does show  the use of tapped touchhole plugs – undoubtedly Platinum by that time.