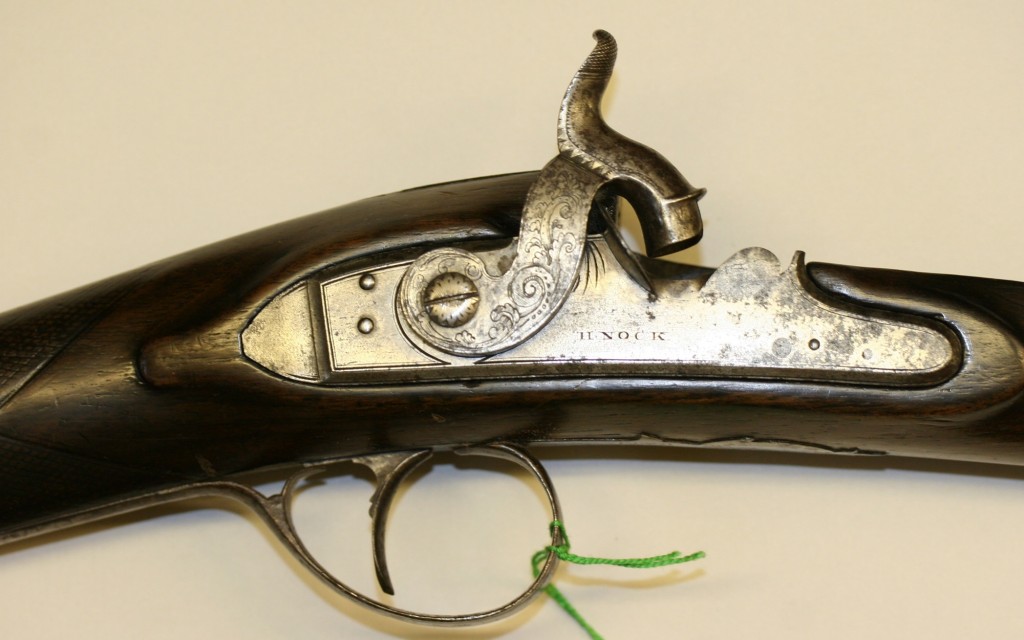 The gun as I got it looked sound but the furniture looked pretty awful and there was quite a lot of rust behind most of it.    First step was to take off the main parts and dump them in the electrolytic bath – I had to drill out the ‘nail’ that came up into the base of the false breech, but otherwise nothing serious.   The Caustic soda electrolytic bath strips rust completely but doesn’t touch the underlying metal, even leaving shiny metal still shiny, and after being in the bath for an hour or so, the hard brown rust will be converted and will brush off leaving the part completely rust free.  I use a soft wire brush on a bench grinder to clean de-rusted things up as it doesn’t round off corners etc. The caustic/electrolytic process seems to loosen rusted parts, and also gets rid of all old oil and grease.   The furniture was badly worn and rusted, but it was  possible to make out the typical William Palmer style engraving on the bow of the trigger guard, and the pattern on the finial.  The minimal  lock engraving was crisp, thus saving having to anneal it to recut it – not too sure about the percussion cock someone put on when it was converted, still, I am grateful that they didn’t add some inappropriate engraving at the front of the lock where the frizzen spring had been, as so often happens.

One reason that I bought the gun was because the barrel appeared to be in reasonable condition, so  I sent it off to Ladbrookes to be measured and honed and it came back prisitine, having had less than  8 thou honed off – £50 well spent.

The woodwork was good, but the chequering was a bit of a mess, and my efforts to put it right only made things worse, so I handed it over to my friend Dick, who is a wizard at such things, and it’s now beautiful- I’ll put a photo on some time.

Quite a lot of rust, and tedius to get rid of  mechanically – about an hour in the tank and its all done. 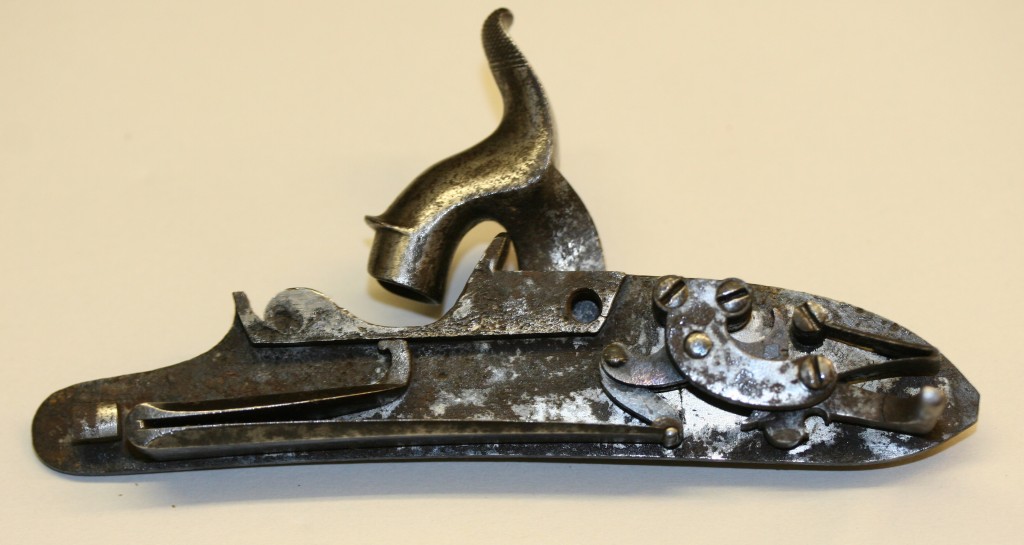 Electrolytic de-rusting reduces the hard rust to soft black rust that can be brushed off easily.

Finial definitely in need of a little refreshment – an hour or so later its looking much better;-

The designs of finials are pretty standard so its easy to find a pattern to recut from.  Finials are usually quite soft so don’t need to be ‘let down’ before engraving.  This is an early pineapple design on an elaborate plinth – note that it doesn’t look too new for the rest of the gun.  There are advantages in being a beginner at engraving when it comes to freshening these early guns! 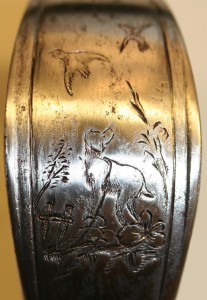 This classic ‘William Palmer’ hound is also easy to find examples of, and the flying pterodactyl is classic as is the little fence – one might think it was a trade mark of his, but actually many examples postdate his death in 1812!

Trigger guards are usually a bit tougher to engrave – sometimes very tough.The aim is to give the engraving enough definition to make it readable, but not to look like new.

I’ve had to make up some new screws and ‘nails’ – the ‘nail’ through the false  breech tang had a mangled head as usual, and as I couldn’t easily find a suitable die to cut a new thread, I made a new top half to the nail and cut and welded the threaded part onto the new top.  I made up a new side nail as the head was mangled, but managed to get away with a No 8 UNC thread – a bit loose but the right pitch.   Making new nails and screws is one of my favourite jobs – it is very satisfying to engrave the head, and you know that if it goes wrong its only a matter of half an hour to start all over again.

Now I’ve just  got to sort out the butt cap and decide what engraving it had originally, and see about refreshing it – butt caps are slightly better than trigger guards to re-cut, but not much!  ——-  I’ve now removed, derusted and recut the butt cap – I couldn’t see much in the way of engraving, so I just recut the plain border lines and a minimal decoration, gently browned it and replaced it – the screws were fine, and not even very rusty.

Update:  Now fitted all the bits back onto the stock and put on inumerable coats of  boiled linseed oil/alkonet root/beeswax and terbine driers, and very gingerly welded  the barrel bolt where the edges were broken ( a common occurance) and re-shaped it – a very good test of my indifferent  TIG welding skills.   It now looks very handsome, and comes up beautifully, so I’m optimistic that I will be able to shoot as well with it as I can with anything else.  The nipple that was in the gun was new, so that will do.

Took it to the Cambridge Gun Club (Cottenham) for the Lakenheath Muzzle loaders’ shoot today which was our ‘recession shoot’ using 1/2 oz of shot so that was a good time to try it out with light loads.  Managed to break the first clay, and then did pretty well for the first half of the shoot, after which the clays got a bit difficult and I didn’t get on so well, but I found the gun handles as nicely as I hoped –  and its the first muzzle loader I’ve had for a while that has gone the whole shoot without a misfire.

I had a session of weighing all my muzzle loading shotguns as I realised the H Nock single was a bit light – it actually came out at a shade over 5 lbs  – I haven’t yet tried it with a full charge – I guess probably 2 1/2 drams of black powder and 1 oz. of shot – it will be interesting to see how comfortable it is with these bigger loads.  It is certainly a very handy little gun and I look forward to trying it for game shooting – it would be ideal for rough shooting in the woods.

Took it to another LML shoot recently and shot 2 1/4 drams and  1 oz.  Did very well in the first half of the shoot but then lost concentration… or the clays got more difficult (whichever! as the YP say)! Then had a go at driven clays, which I like, and did reasonably – so all in all I think the H Nock is probably my favourite shooting gun – certainly I don’t have anything else that I can shoot as well with.

Took it to a muzzle loading partridge and pheasant shoot near Sudbury last weekend and did reasonably well for me – just a bit less than the average bag  for everyone there and I shoot a lot less regularly at  game than most.  I changed over to my Manton tubelock at lunchtime and didn’t hit anything with that, so I’m more than happy with the Nock – now I just need to make up the bits to create an interchangable flint/percussion gun of it!