Here are some exerts from my blog relating to the gun I bought at Southams earlier in 2019:-

The gun I bought is a Westley Richards percussion double 11 bore – I had left a bid above the bottom estimate, but got it for £380 Hammer price – just below the bottom estimate, so good!  There were a couple of expensive Westley Richards guns for sale that went for what I thought were fairly high prices given their condition, which frankly wasn’t wonderful, but I bought this one as I thought it would make a good shooter.  It is a bit of a dog’s dinner, and I havent yet quite worked it out fully.  The barrel is very good externally with pretty fair bores – its genuine Westley Richards with his barrel maker’s stamp, signature ( very clear and unworn and looks genuine but unusually read from muzzle to breech ) ‘Westley Richards & Co  23 Conduit Street London’ and Birmingham proof marks V & BPC which were used 1868 to 1925.  The problem is the address – it was only occupied by WR & Co  from 1917.  The barrels are numbered 1019 as are the locks – all looking like they are original numbers.  The numbers, according to Nigel Brown’s book, should be for 1843 ish.  The gun has a rounded or semi-pistol  stock which was quite a late style.  There are a number of things that are notably odd – the stock at the breech isn’t deep enough to cover the sides of the false breech by about a mm or so.  The forend pipe and trigger finial don’t quite fit the cutouts suggesting that they are replacements.  The forend ramrod pipe has somewhat abbreviated engraving, the trigger guard finial very abbreviated but of classic shape.  The trigger guard has no engraving and is blued, the butt cap is full steel and similarly plain and blued.   The barrel looks much less worn than the lock plates which are signed Westley Richards and numbered 1019 on the insides – the cocks are poor replacement castings.  The nipples are loose – the holes are too big for 1/4 BSF and too small for 9/32 BSF so I’ll see if borrowing oversize 1/4 BSF taps will work.  The screw holding the locks in has been replaced with a round headed brass screw with the head filed down.  There is no ramrod.

What would I speculate about the gun?  one guess is that there was an 11 bore percussion gun made in 1843 ( the locks are signed Westley Richards, not ‘& Co’, and are fairly worn).  The gun was then rebarreled by WR & Co post 1917 (I know it sounds unlikely?).  The stock is not original to the 1843 gun but is later,  possibly reused from something else, but fairly unworn and certainly not 1843 style – possibly dating from the rebarrelling.  The good news is that WR still exists, and their historian may be able to help with the puzzle.

I borrowed a set of oversize taps to fix the nipple holes on the Westley Richards, but even the 15 thou oversize one was still a bit loose, and they are UNF  which is 28 t.p.i. ( 1/4 and 9/32 BSF are 26 t.p.i. and 1/4 is what is used on most later English percussion nipples) which means that in 1/4 deep hole you are almost half a thread out by the bottom.  So I tapped them out  9/32 BSF, which is 30 thou bigger than 1/4 BSF, and that worked fine.  I made a couple of titanium nipples, but one didn’t start the die properly, and doesn’t have a very good thread so I’ll remake it before I try to use the gun.  The photo shows the back of the die, which I have ground on the 5 inch grindwheel so that it can cut the thread right up to the shoulder of the nipple – use the unmodified side first.   Here are a few shots of the WR markings etc….  The gun is 11 bore, weighs 7 1/4 lbs and has a pull of 14 1/4 inches – about 1/4 inch of cast off. 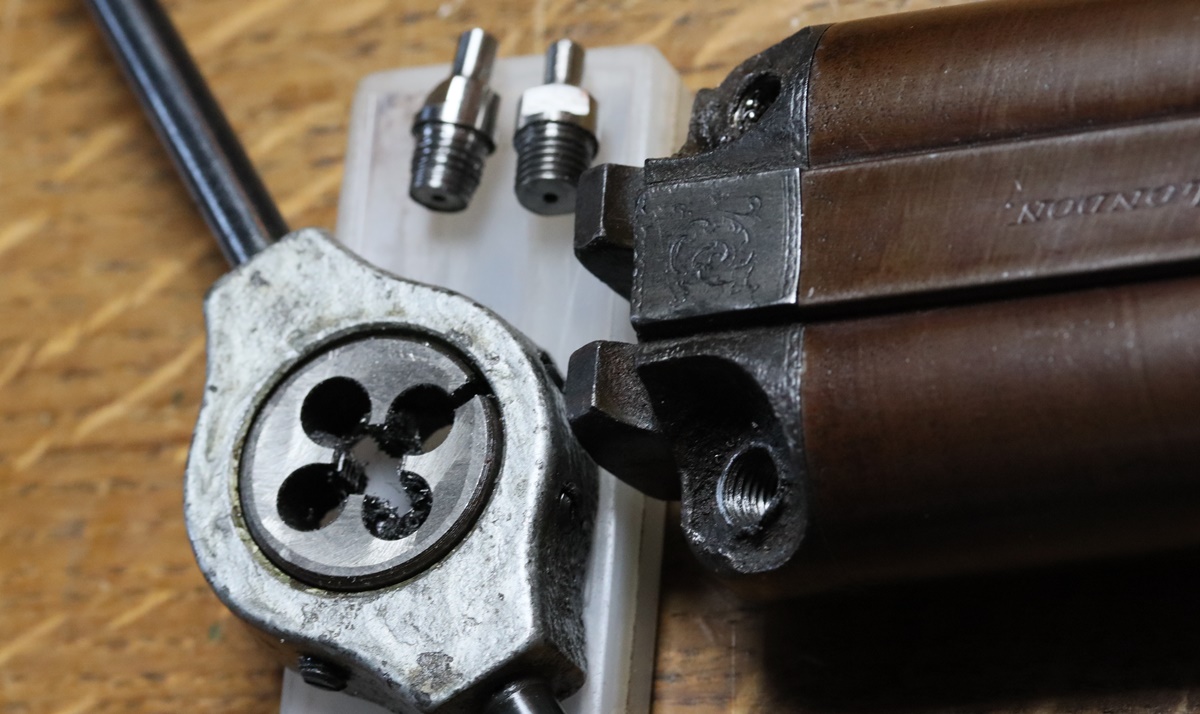 Bottom of die recessed on grindwheel. 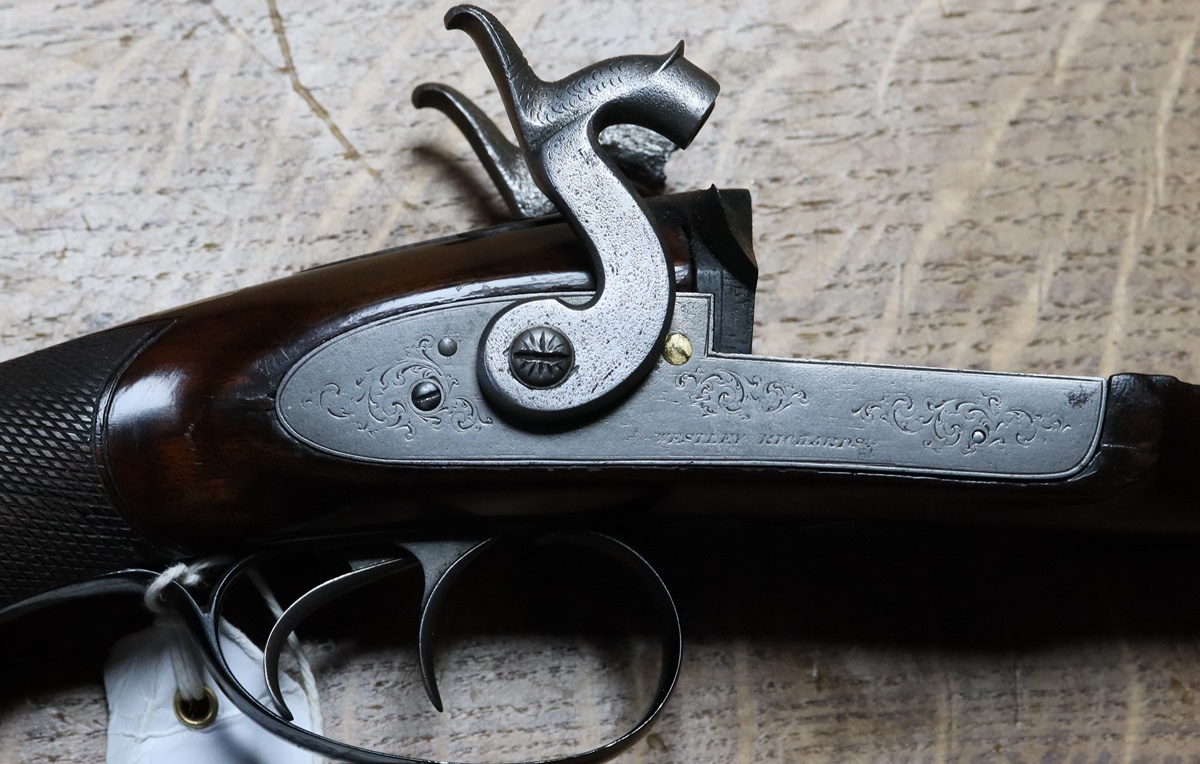 Locks are well made inside, engraving is bog standard minimal Birmingham standard of the period. cocks are castings – they look like Kevin’s rejects! 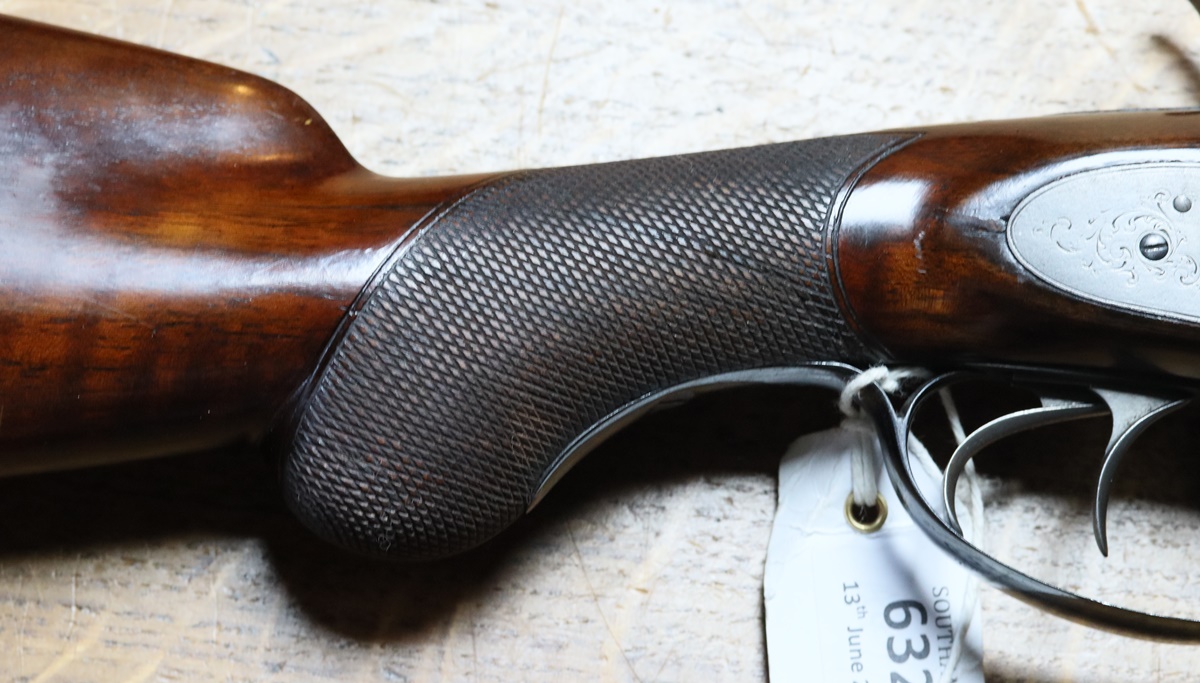 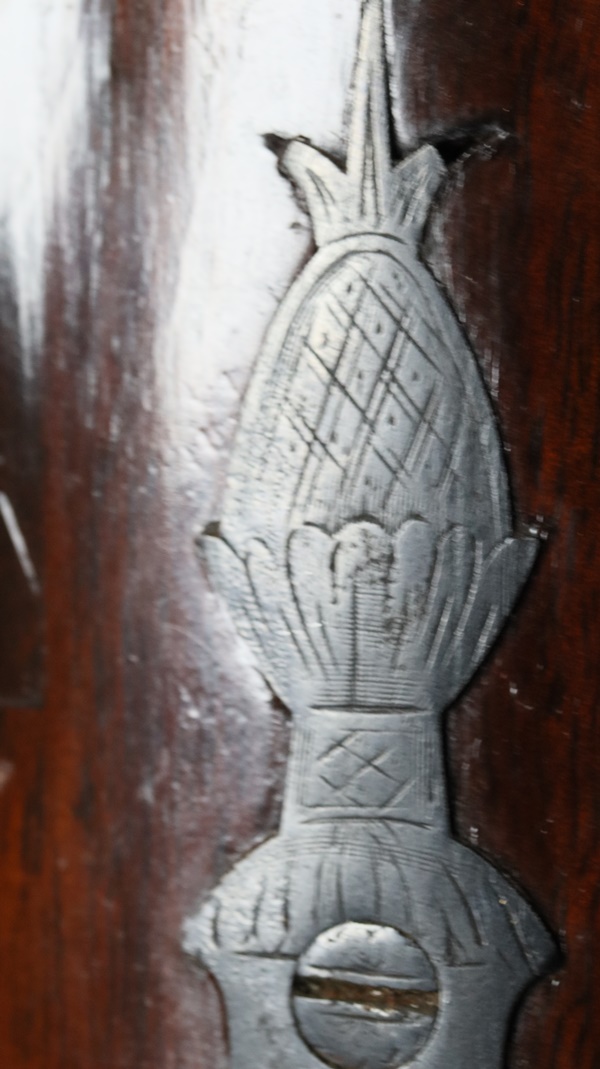