I bought this in the last Holts sale.  It is a very carefully restored William Powell 12 bore hammer gun No 7748  made sometime in the 1870s (?) to Westley Richards patent single bite top lever design patented in 1871 – many features of the gun are shared with Westley Richards, including the distinctive ‘Crab Knuckle’ joint.

The top lever is an interesting design – it looks like a conventional rotating top lever with a large screw in the centre, but actually the pivot is to one side and the centre screw links to a slide that pulls the bolt back from the ‘doll’s head’ latch. It is a masterpiece of the stocker’s art, with a true bar in wood sidelock and the wood enclosed joint. I had a look at the inside of the locks – they are rebounding locks to Stanton’s patent No 367 of 1867, not the earlier one of Bardell and W Powell No 2287 of 1866.  The locks are stamped John Moore inside – there is no visible stamp for Stanton’s patent – see below.  It has 30 inch barrels of Sir J Whitworth’s fluid pressed  steel – at that time becoming popular as an alternative to damascus – the bores and chambers are perfect. The Westley Richard’s patent is about right for the steel barrels – the patent of Whitworth was dated 1857 and he was knighted in 1869 and Joseph Whitworth & Co was set up in 1874  so a date of around 1871 – 187x   seems most likely  as the single bite action probably didn’t have  very long before it was superceded by double bite actions (not sure about that bit!)  – it also suggests that the barrels are original – much later and they would have been Nitro proofed.  I am told that it should have no difficulty in standing a nitro proof – but I’m happy to shoot black powder in it for the moment – if I get on well with it ( p,s. I do – but only with a 1/2 inch pad on the butt, when I forget then I miss as I can’t get my head down low enough on the stock!))  I may decide that I want it for a game gun, in which case I will go for  reproof (or not – I wouldn’t want to take it out in the rain!).    At the moment I can’t imagine a more elegant gun, and I can’t believe my luck in finding it – it is much admired when I use it – sometimes you find  something that just brings joy to your heart when you look at it – this does that for me!  (photos courtesy of Holt’s website) 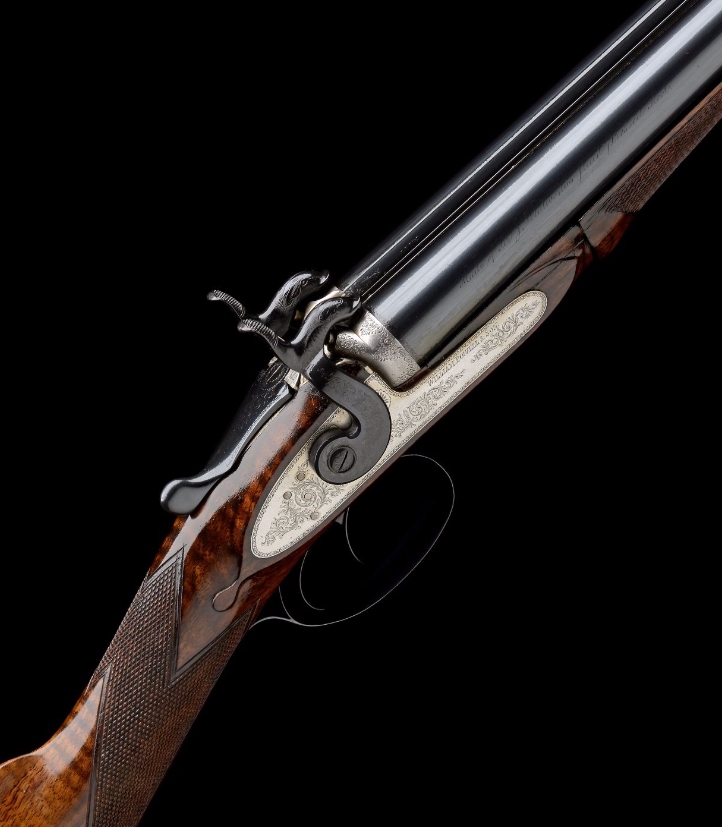 The cocks are unusual, like much of the design – they look like pinfire hammers  but are not and never were – you can open the barrels with the hammers in the ‘fired’ position (it has Stanton’s rebounding locks) – but the actual contact with the firing pin is back in the throat of the hammer, rather than at the end – you can just see the firing pins on the edge of the photo below – the firing pins are actually replaceable discs, but I haven’t had them out yet. 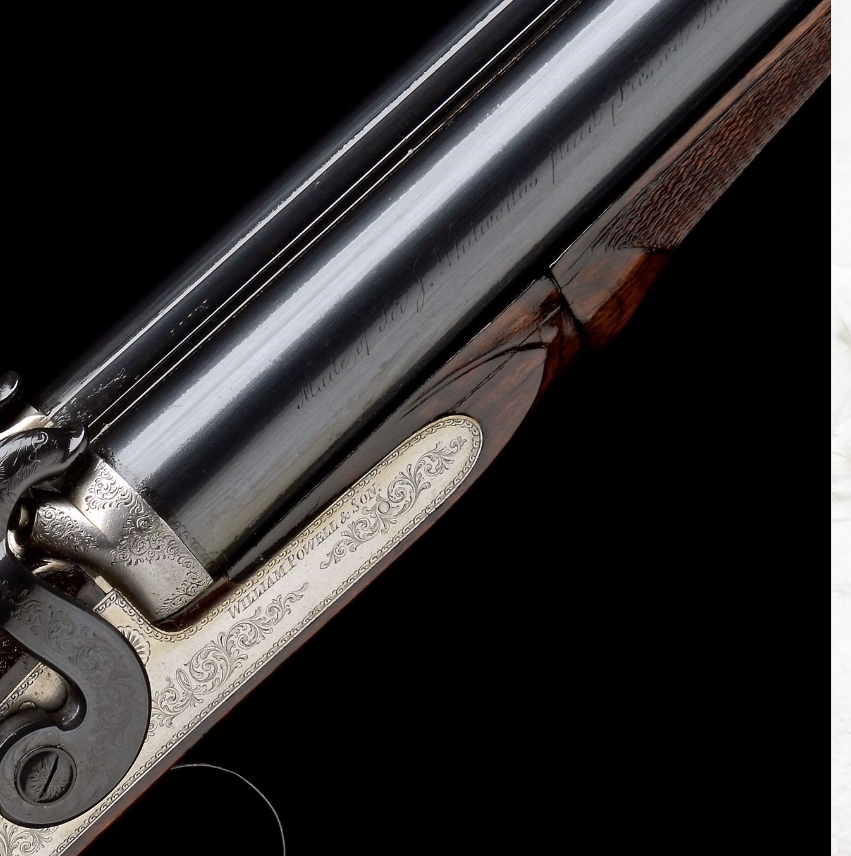 The joint is encased in wood in the ‘Crab Knuckle’ – used by both Westley Richards and William Powell, two excellent gunmakers 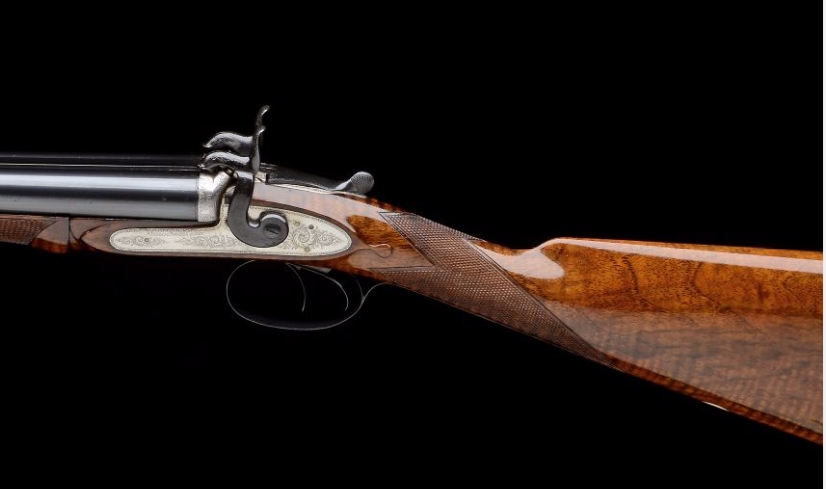 The stock is a beautiful piece of wood, and the chequering is fine and crisp – almost certainly recut but like new!  For once the gun lives up to Holts’ photos – the photographer there can make a rustbucket look like a $million so one has to be careful! 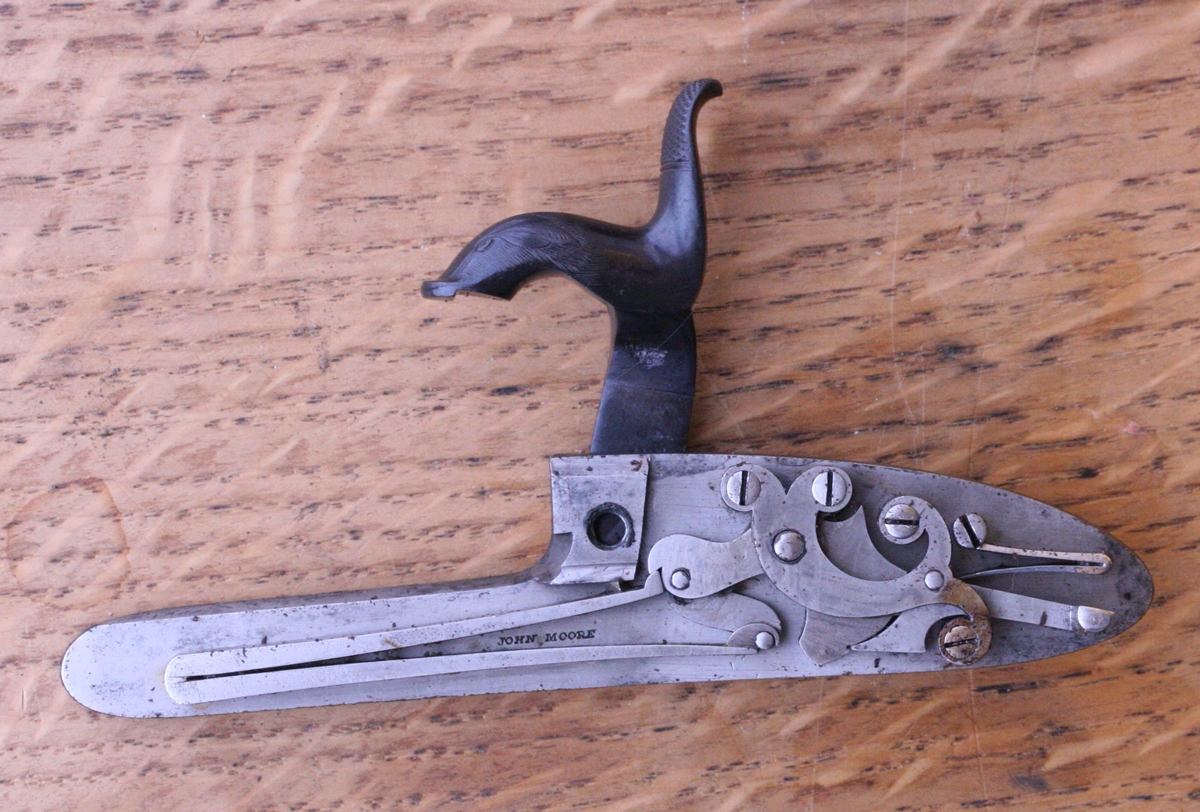 Any information about this beautiful  gun would be most gladly received!

P.S.  I’m so taken with this gun that I’m looking for another Powell or Westley Richards of similar date that I can use as a game gun – I don’t want to take this one out in the rain!  There is a WR gun in Holts next sale (June 30 2016) but it isn’t rebound locks and the bores are marginal, so although its Nitro proofed I think I’ll give it a miss.