The first rule is DON’T do any damage – if you can’t get it off without damaging something, do  you really need it apart?

The secret of not doing damage is fairly simple;- 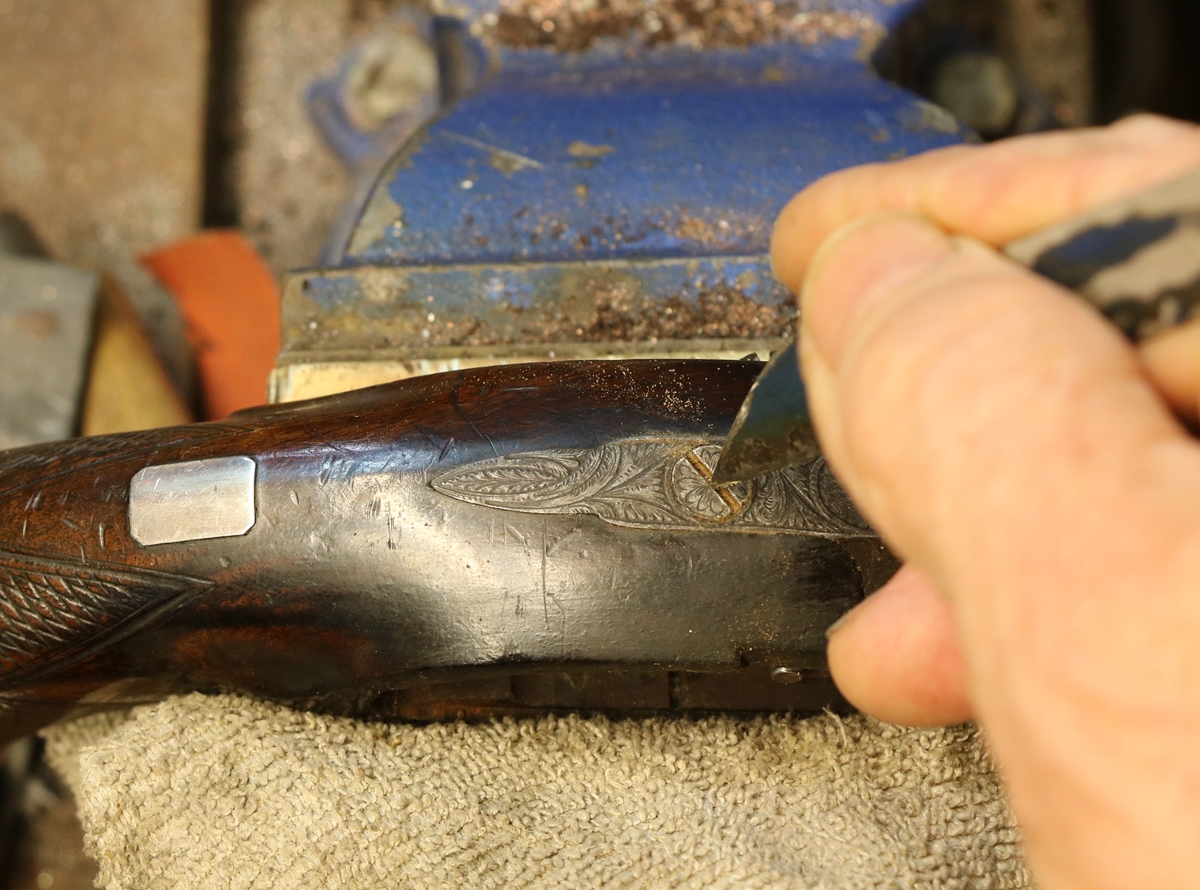 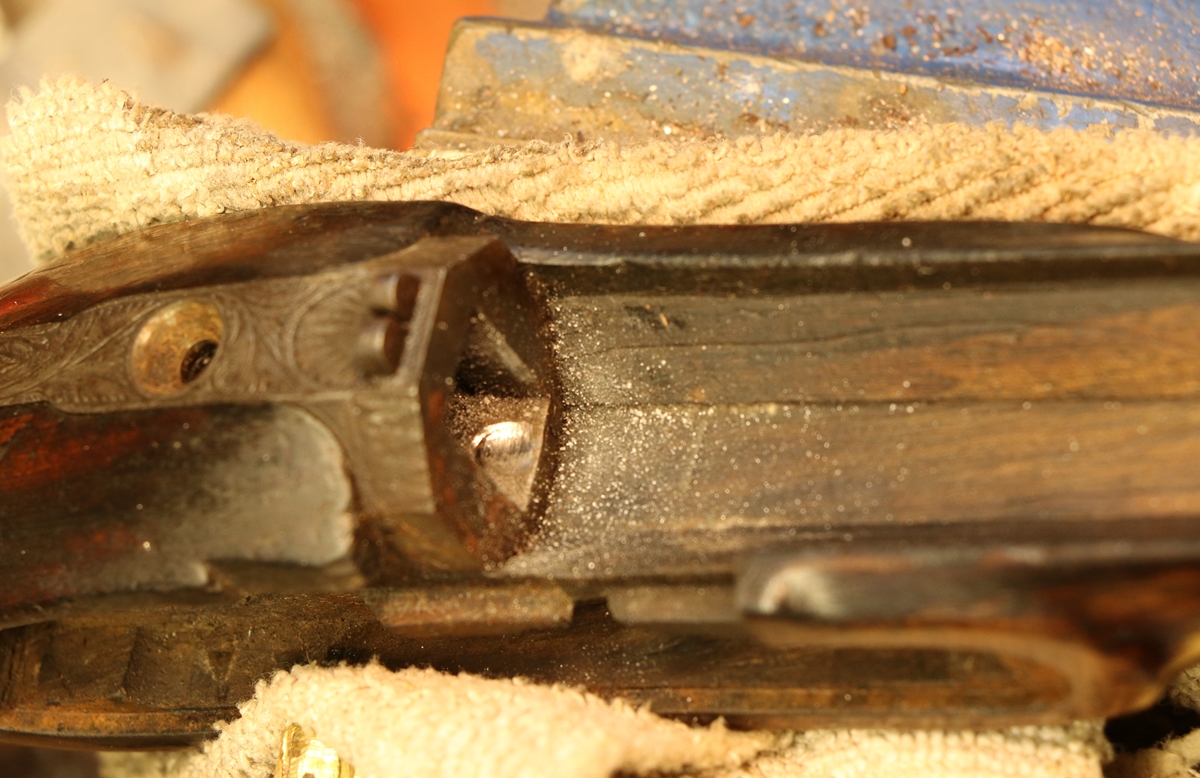 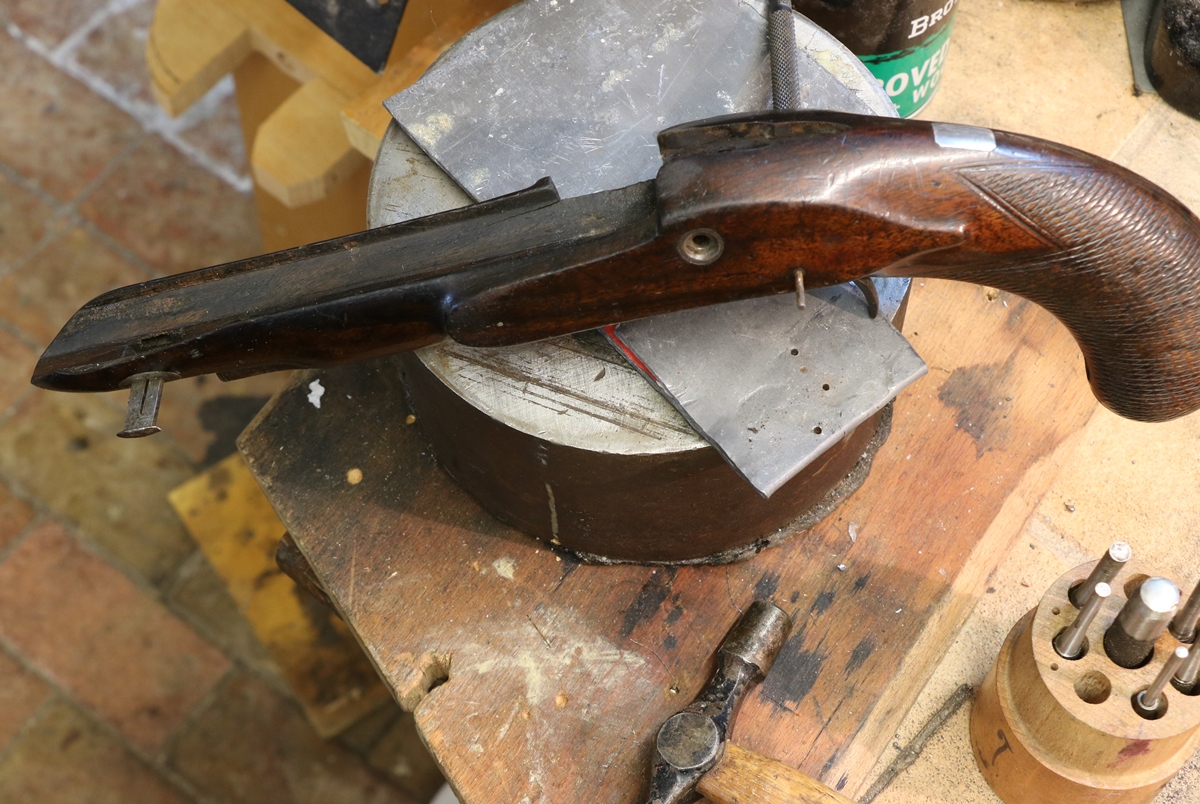 Knocking out the trigger pivot pin onto folded lead sheet

The barrel has been ‘struck off’ first with a 6 inch smooth hand file, then with a 6 inch No 6 cut file, tehn with a fine stone, 600 grade strip,and ultimately with 2000 grit paper and then polished with 2500 paper. After that it was washed in warm water and detergent and coated in chalk slurry which was dried and brushed off.  It is now in teh process of being browned….  The nipple drum came unscrewed easily and has a good thread.

I decided that I couldn’t bring myself to cut up teh original lock  plate to fit a pan, so I am making a completely new lockplate – it will take me a lot longer but I will feel happier, and anyway I like making locks.   So here are some photos;- 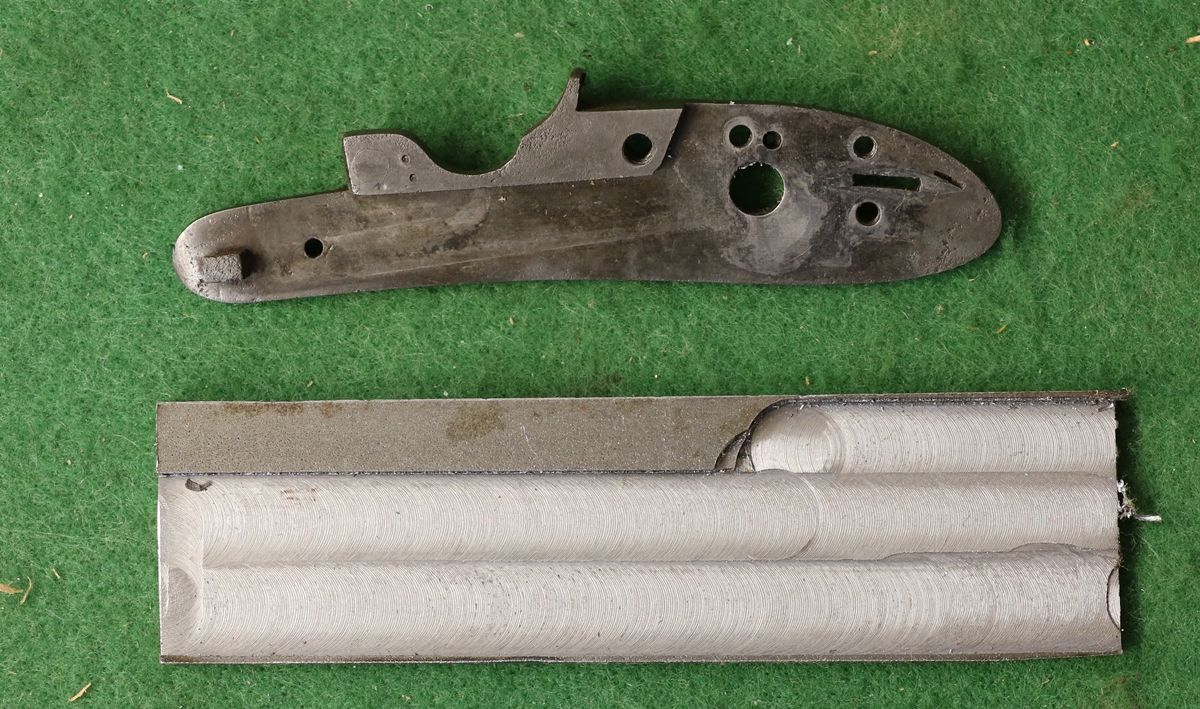 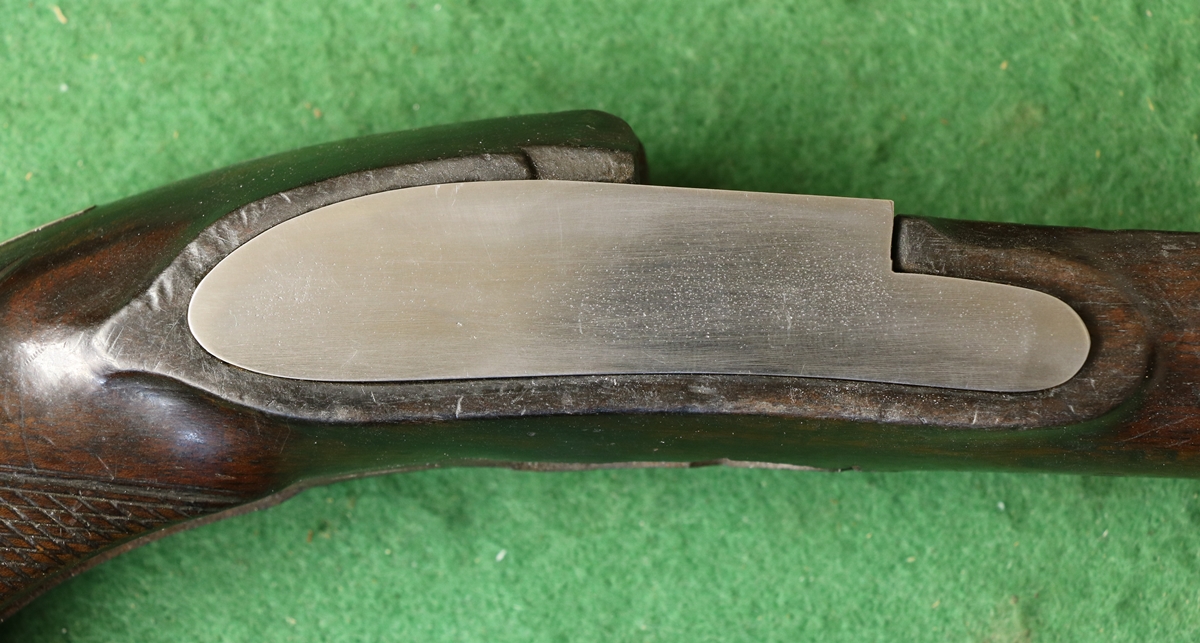 It was about 4 – 5 hours work to get the plate to this stage.  The gap in front of the top of the lock will go as that whole section will be replaced.

I cut the outline with an angle grinder with 1 mm disk and then used a 50mm linisher and then filed to get the blank – I have now put the step on teh tail of the lock – Now I need to check where the touch hole comes and check that my pan will fit and everything will align, then if its all OK  I will have the  tricky job of transferring all the holes accurately from the original lock plate onto the new one – I will use all the original internal lock parts as they can be swapped back to percussion if needed.  Then I have to file a bevel round the lock plate to match the old one and do the engraving.  When teh engraving has been done I will cut the lock plate for the pan section and weld it in – I will leave that until the engraving has been done as the pan gets in the way and its easiest to weld in the pan last – I might cut the slot for it before engraving so that I can see how much space I have to fill. 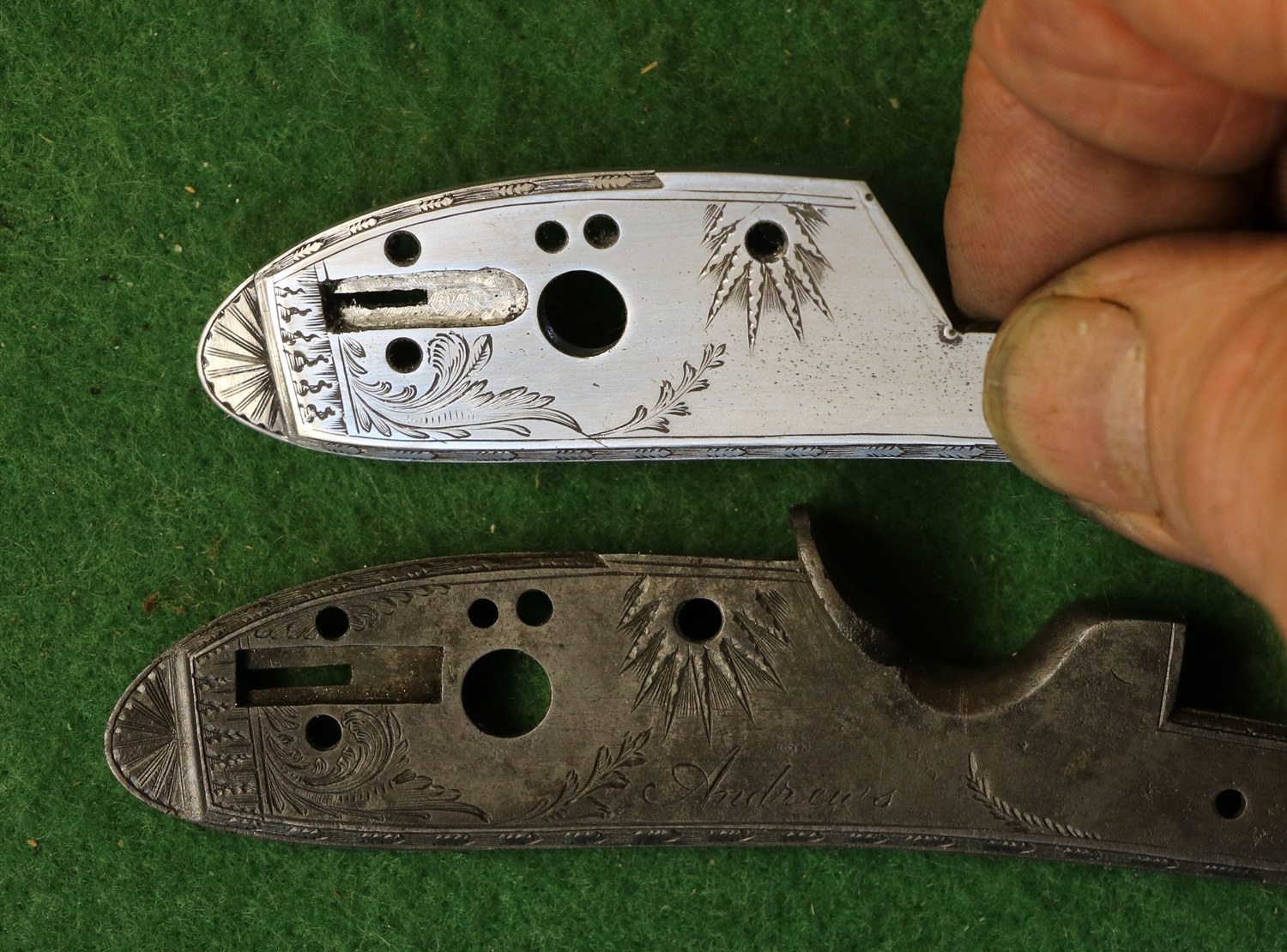 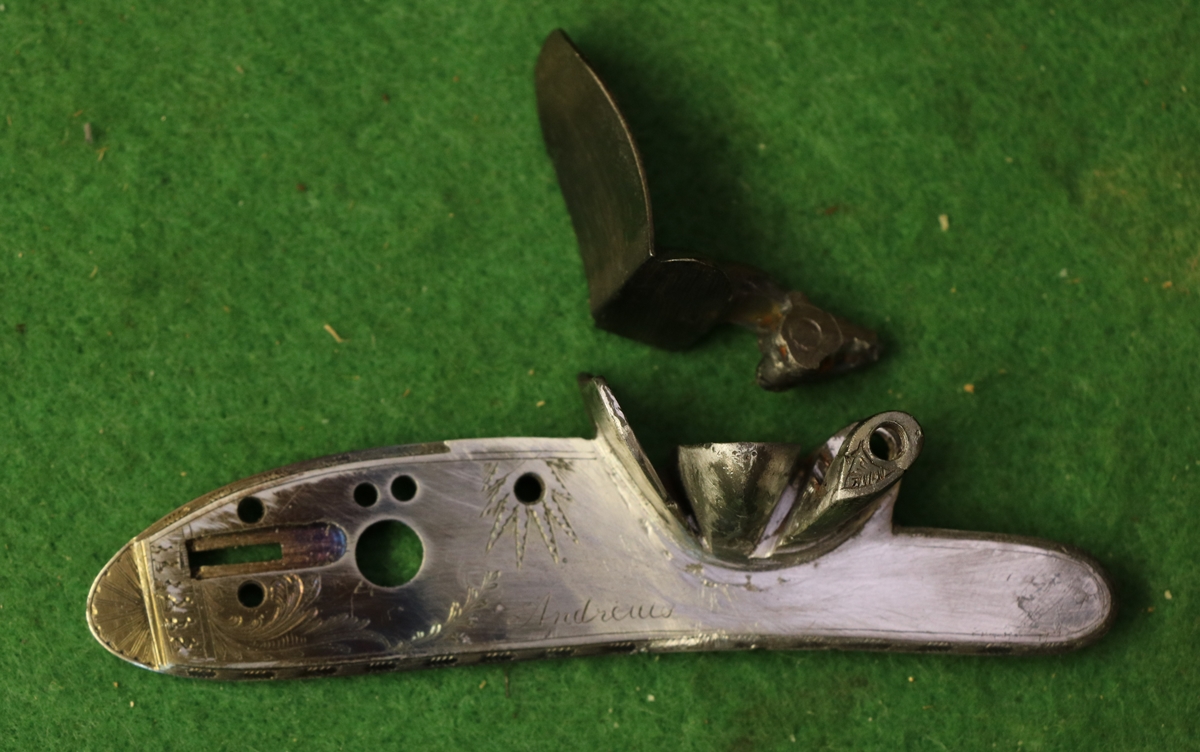 The pan section has been welded in 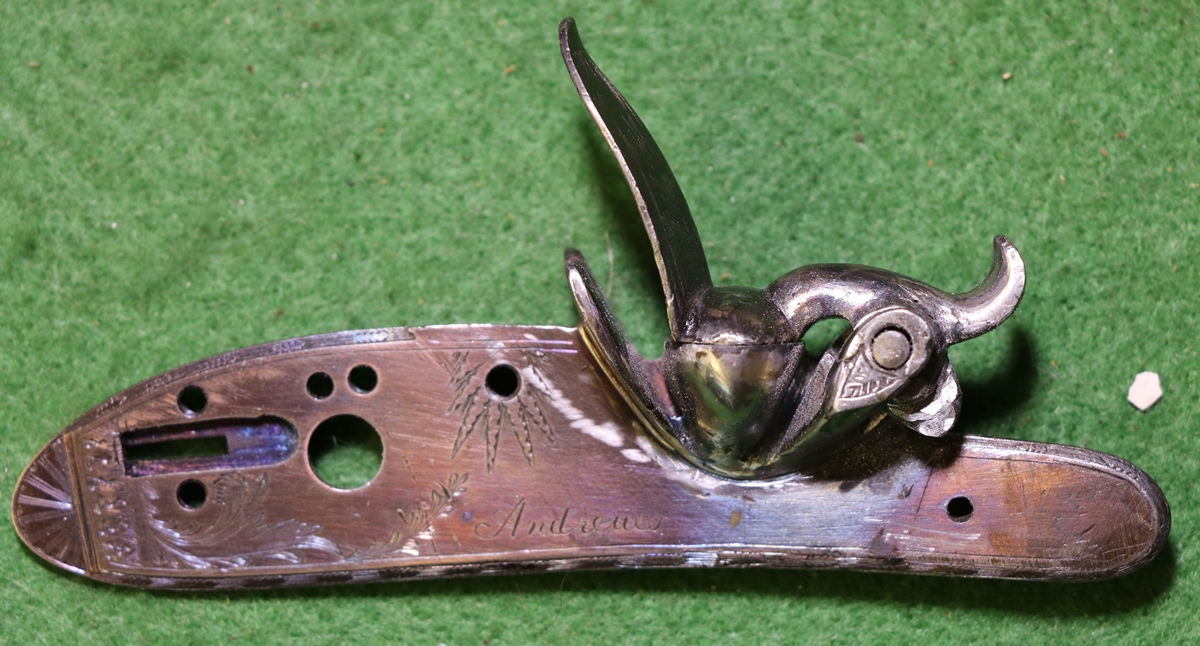 Glue the frizzen to the pan with Araldite to hold it while drilling the pivot hole. 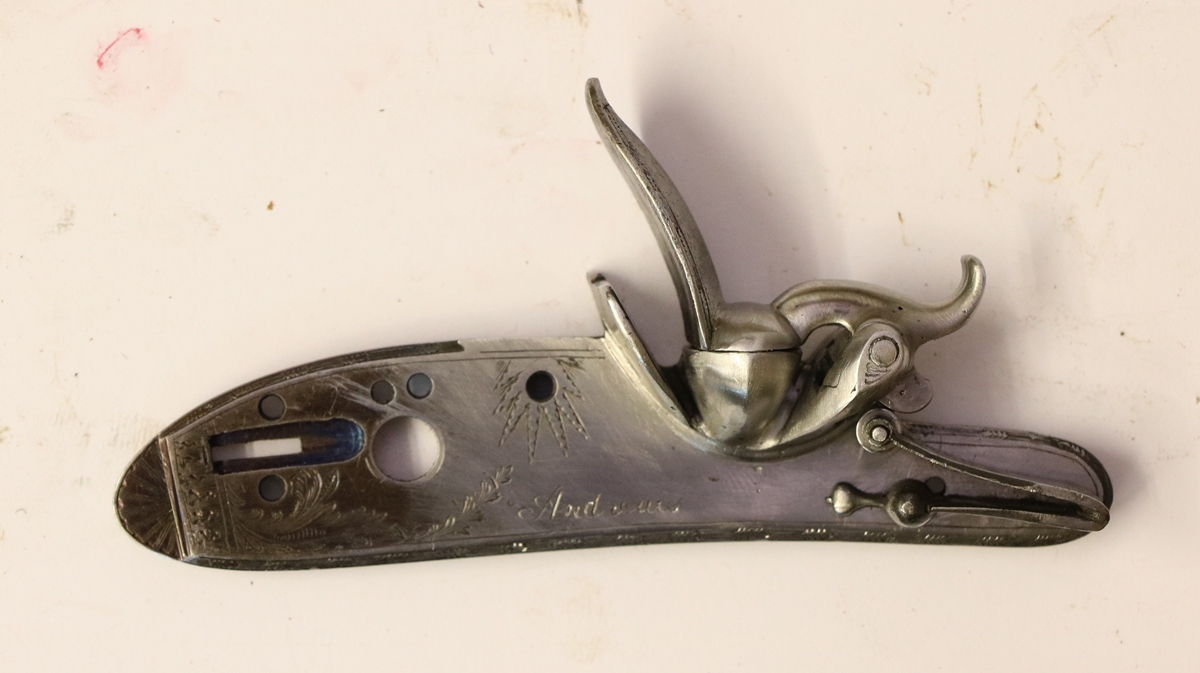 The pan section and frizzen have had a lot of work with fine files to get the shape right.  The pan now works