There are several types of safety catch found on muzzle loaders – I’ll put examples here as I find specimens to photograph.  One of the earliest safety catches to be widely used was the ‘dog’  on a flintlock – giving rise to the name ‘doglock’.  This catch, which was all external to the lock took the form of a pivoted hook that could be latched into a notch in the back edge of the cock, thus preventing the cock from falling.  This was originally used in place of a half cock notch with early locks with horizontal sears.  I’ll look out some photos.

On somewhat later guns there were several types of safety catch, including ‘grip safety catches’ where a movable section let into the trigger guard tang had to be gripped in order to allow the gun to fire.  A more common type is that found on many flint and percussion overcoat or horse pistols which is described below;-

The ‘standard’ safety e.g. on pistols like the Andrews described on this site being back converted to flint – acts to lock the tumbler in the half cock position when the slider situated behind the cock is slid forward.  The slider moves in a groove cut in the outside face of the lock plate with a tab passing through a slot cut through the lock plate within the groove – the groove and slot define the movement of the slider.  A ‘ bolt’ is fitted on the tab of the slider on the inside of the lock and held by a pin. The bolt has a protruding square that engages with a slot in the tumbler when in the forward, lock, position.  There is a small triangular spring which attaches under the head of the screw that secures the sear spring and covers the V of the sear spring.  It has a small protrusion on the inside of the spring that engages with depressions in the bolt and acts as a detente to hold it in either the safe or fire positions.  The spring has a small notch near the attachment hole that engages with a small notch in the sear spring and helps to hold it in the correct position.  The safety spring is a very fiddly thing to make on account of the small protrusion and detailed shape.

looks like a bit of rust on the safety! 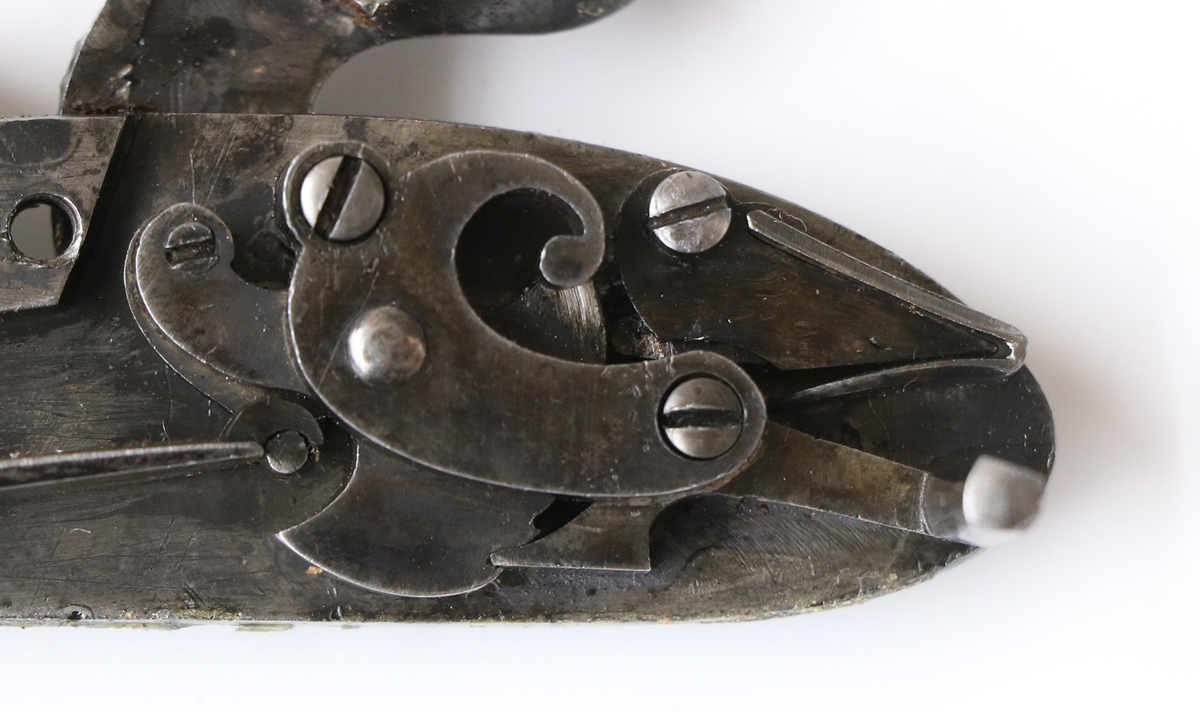 The safety catch spring sits over the V of the sear spring. 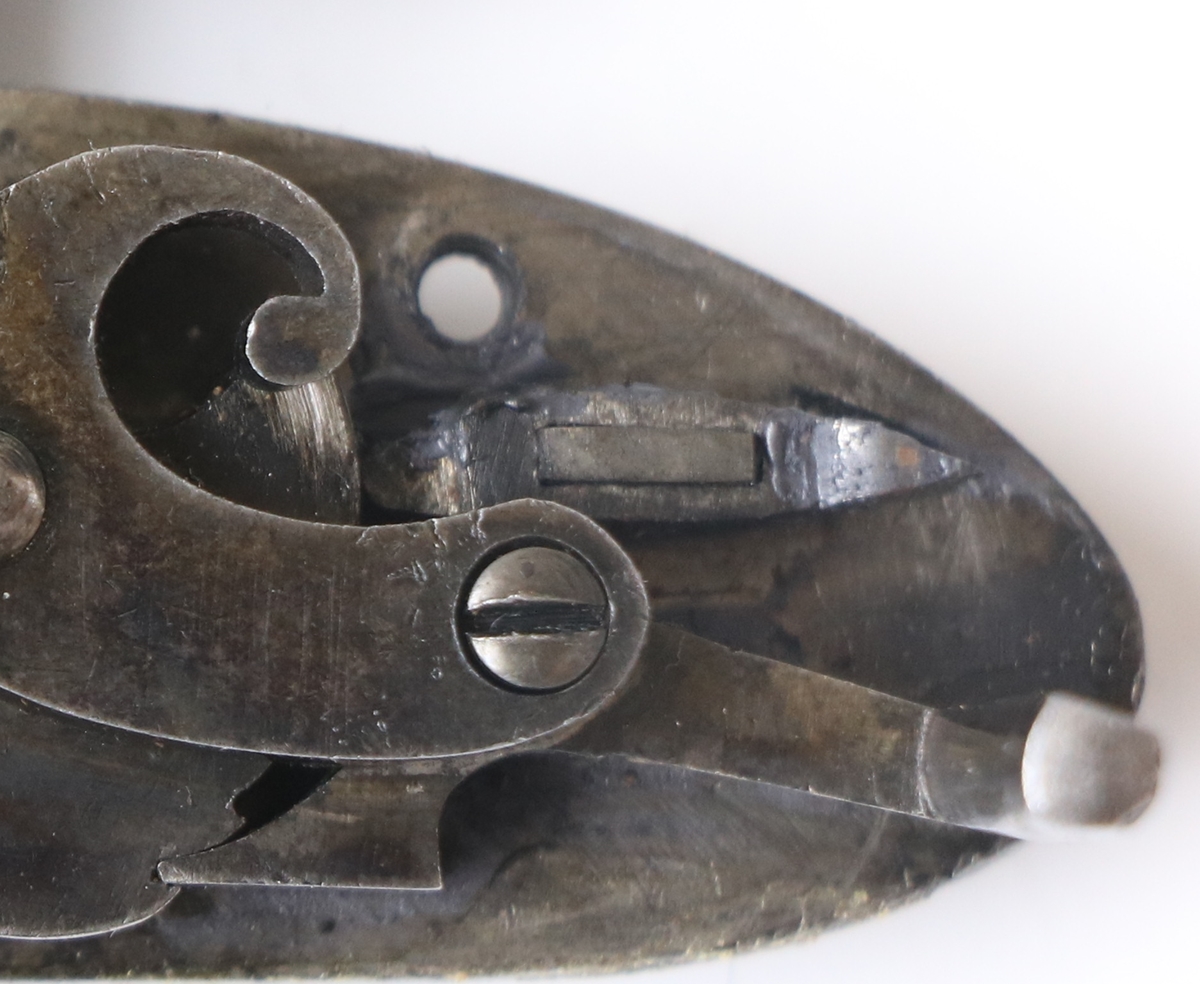 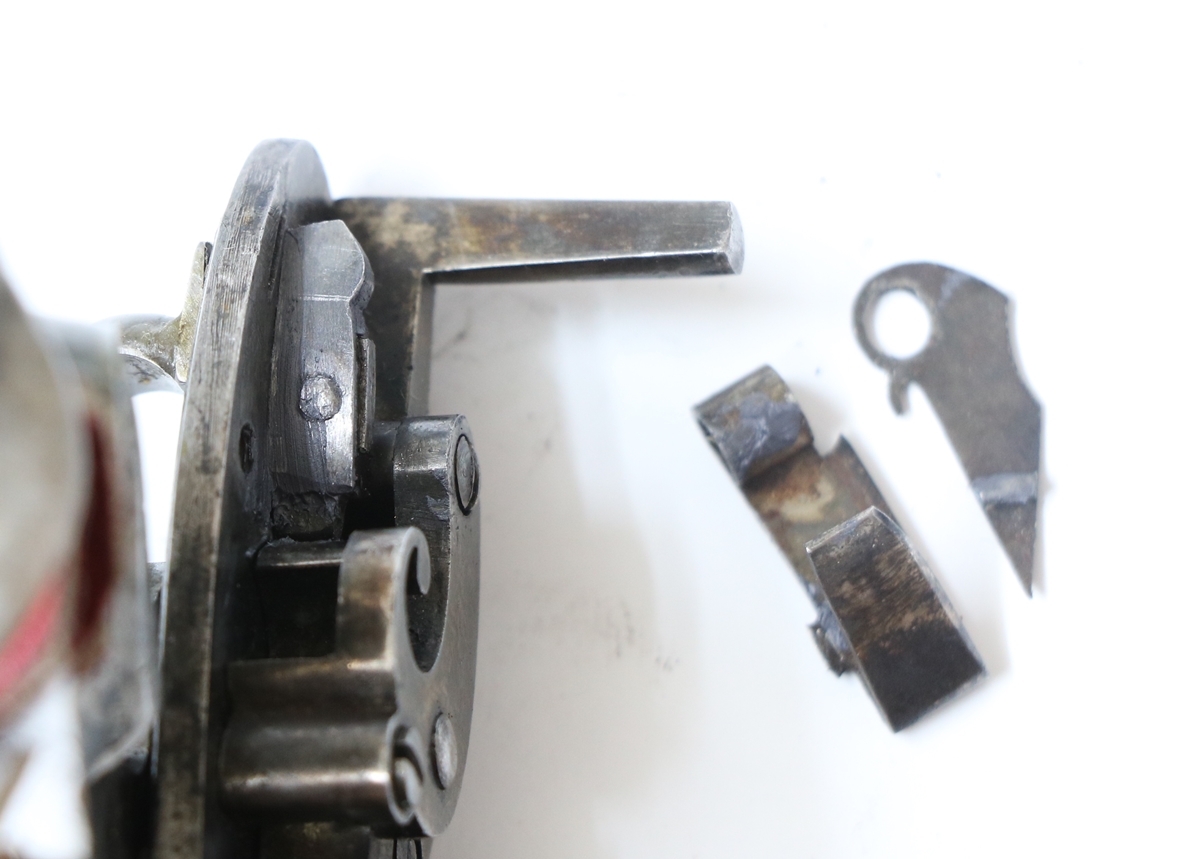 The bolt on the back of the slider is held by the pin you can see.  The tail of the bolt is shaped as a detente for the spring. 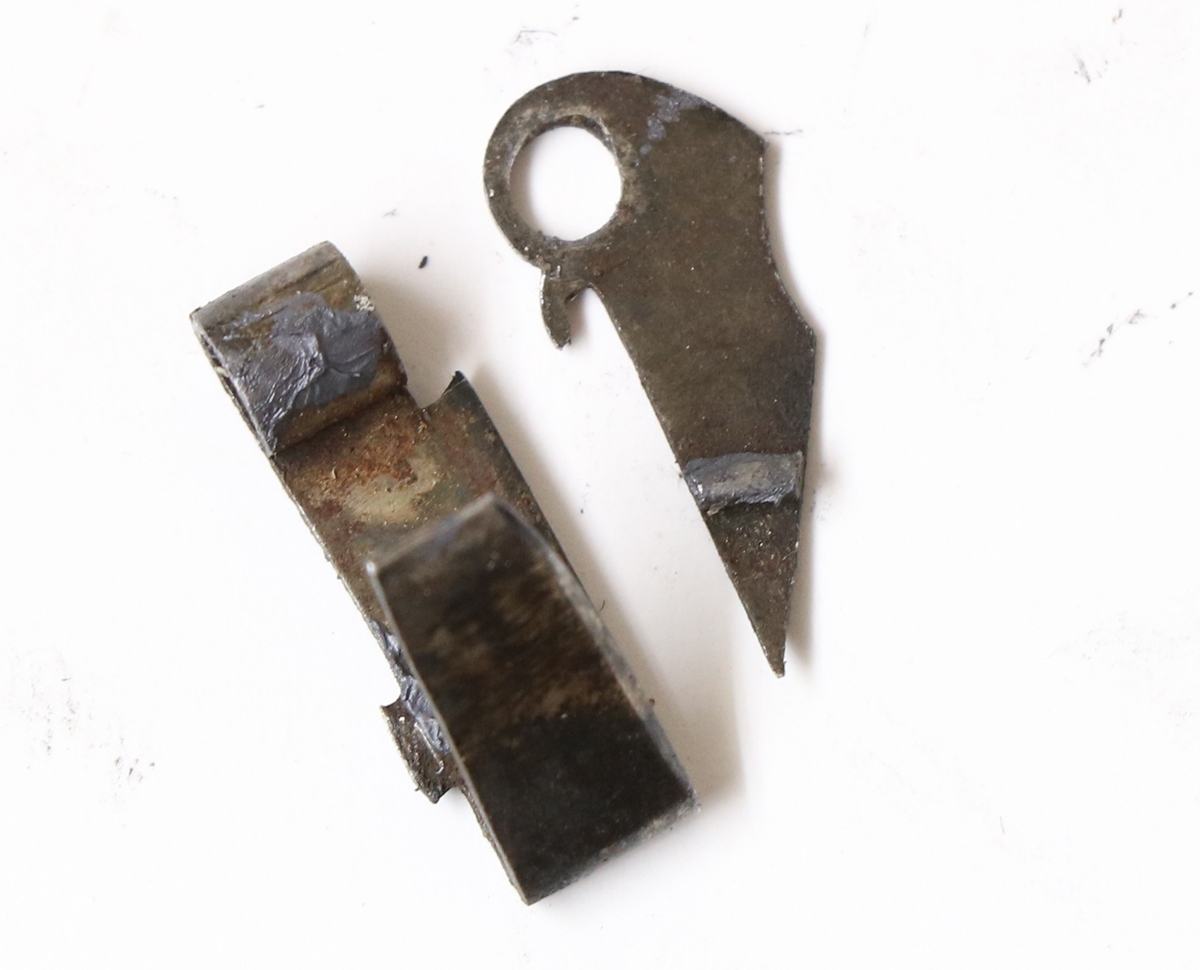 Safety catches were often fitted to percussion rifles – my Lancaster double rifle has safety catches – but they differ from those common on overcoat pistols such as the Andrews described below – In many rifles the catch is fitted in front of the cock and has fewer parts and a simpler construction.  These catches work  on the inside face of the cock, which has a radial groove with a notch in it.  The slider combines all the functions of the knob, bolt and spring, and apart from the groove and slot in the lockplate and the groove in the cock, the only other part is a small screw with a flat head that screws into the slider from the inside of the lock.  The slider has a raised lump on the rear end of the spring tail that engages the groove in the cock, and the forward end of the slider is formed as a spring with a slight protrusion on the underside that engages with one of two depressions in the face of the lockplate to hold the slider in the safe or open position.  A further groove on the inside of the lockplate takes the head of the screw so that its top is level with the inside face of  the lockplate.  So there are only two additional parts to this safety, the slider and the screw. 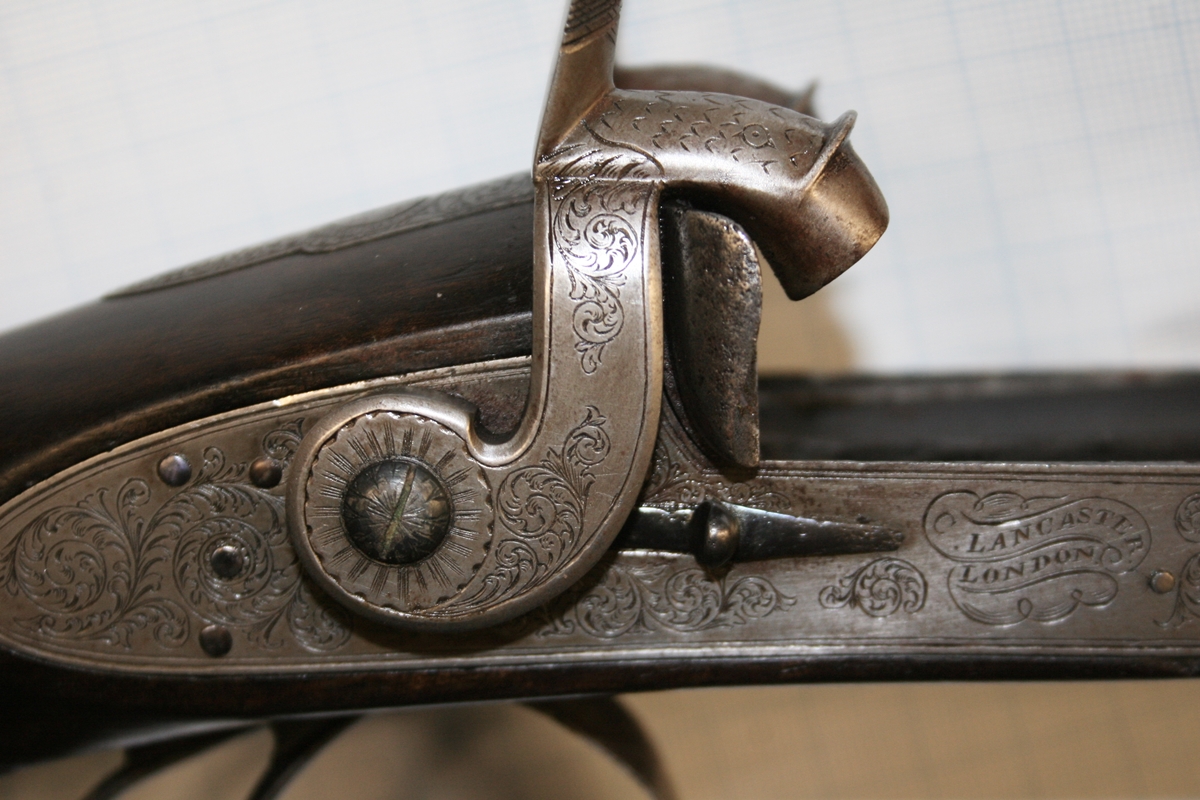 The lump that engages in the cock hasn’t been shaped to fit yet. 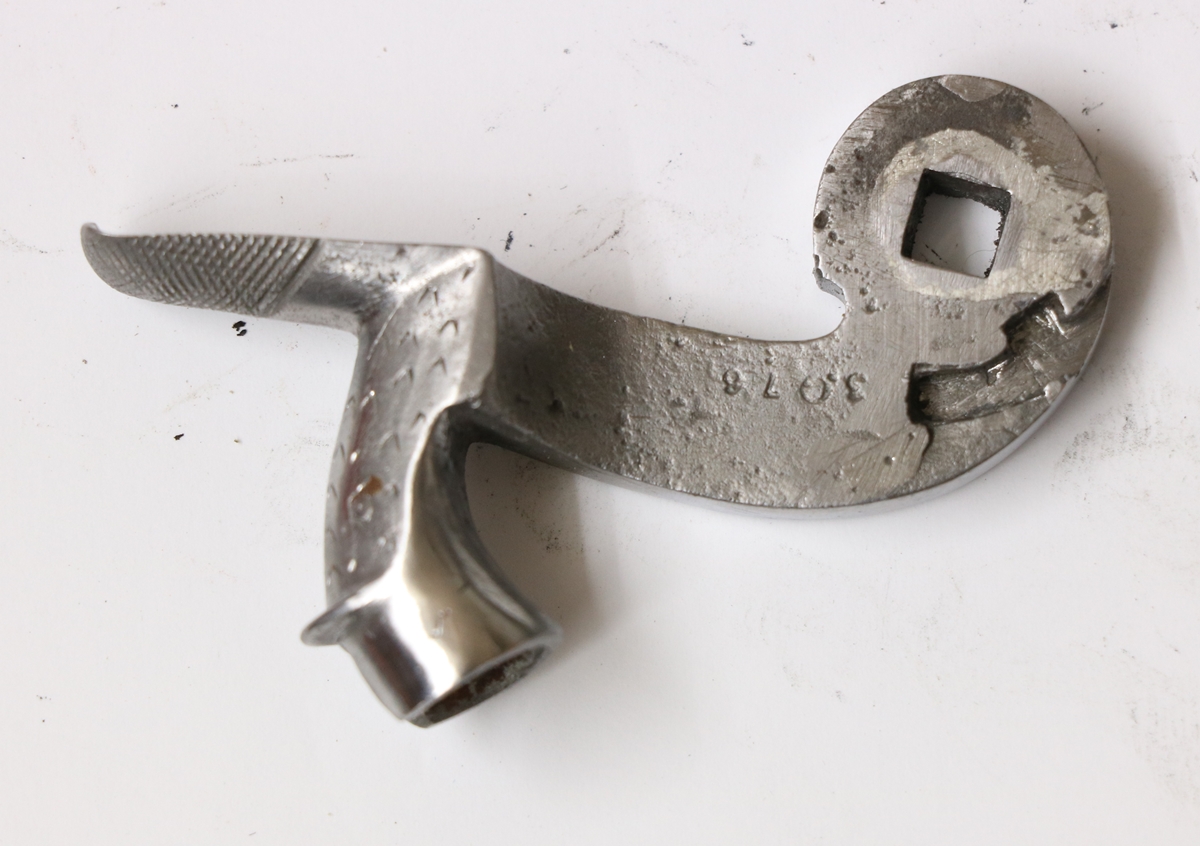