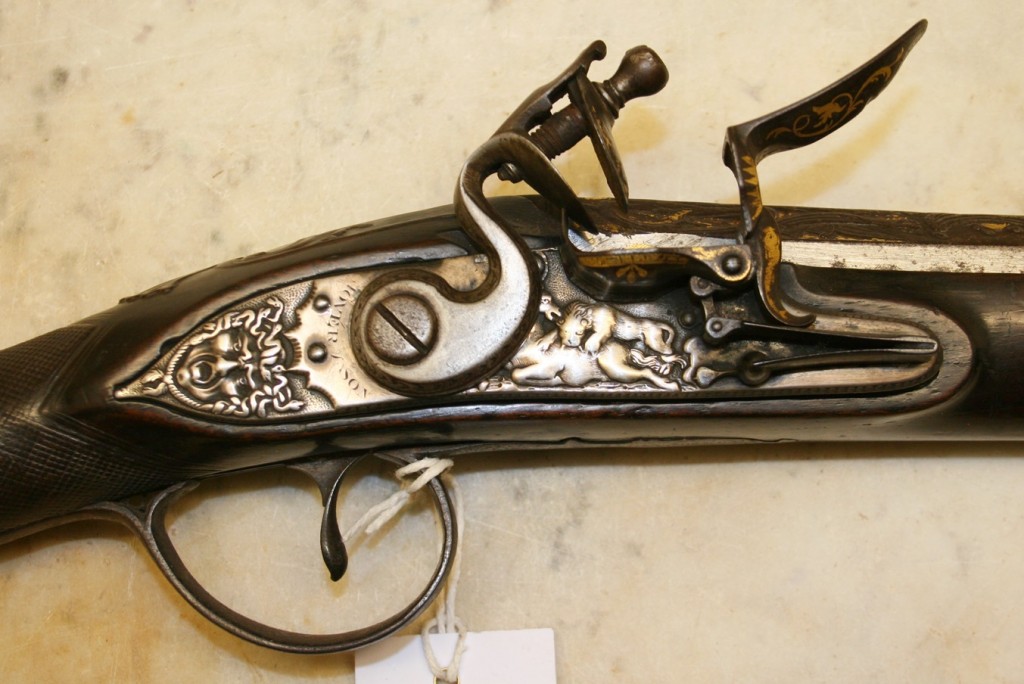 Jover lock – solid silver –  London  hallmark for period  1765 -95 ( hallmark partly damaged)   The cock and tumbler screw are probably not  original but the top jaw and screw are original and both are gold inlaid.    Gun is un-numbered but probably  made around 1770 – 80 ish ( Twigg introduced the interrupter scear in 1770, and its quite rare – also the link on the frizzen predates wheels).  I’ve had a re-think on the date – although there are several old fashioned features in this gun, lock and barrel are both clearly signed Jover and Son, and he didn’t have  & Son in the business name until 1784, so this gun must be made on or after that date.  The lion’s head hallmark covers the period 1765 to 95 but the year letter is obliterated by a hole, so together they bracket the date in the range 1784 to 1795.   – at a guess I’d put it  at the beginning of that period but it is so old fashioned in many ways  for 1784, that it is difficult to see where it fits in.  Out of date features include the following:   trigger pivot is pin in wood, as are fastenings for trigger guard.  Link between frizzen and spring ( replaced by wheel),  interceptor scear lock and   broomstick stock profile, two barrel bolts.

I haven’t cleaned off the rust in this photo – its as I got it.  The heavy  gold inlay has worn through to the iron in places,

possibly someone tried to remove it.  Notice the cock  hits the frizzen well off the centre.  The cock is obviously a replacement as otherwise it would have been gold inlaid like the top jaw screw and top jaw and the cock screw. 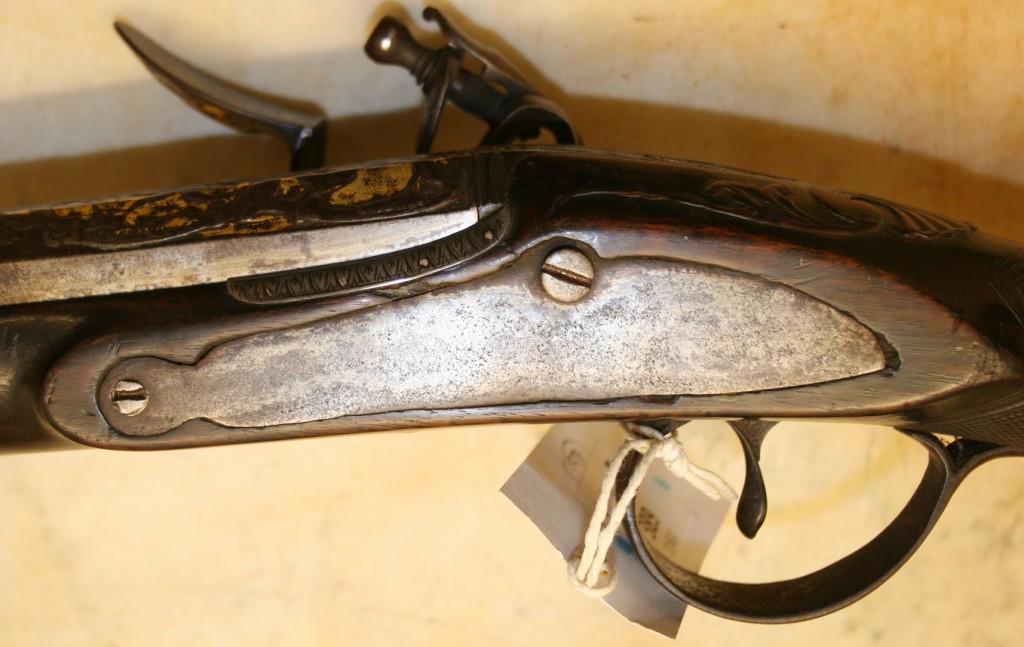 Progress so far;-  I’ve stripped and cleaned the lock and removed the iron furniture, cleaned up the barrel and lightly re-browned it – it doesn’t look rebrowned, its just a bit less rusted now – I have a violent dislike of overly shiny, ginger re-browning.  I’ve made up a bolt escutcheon out of  a small silver casting and engraved it to match the other 3.  I have ordered some copper sheet to make an experimental butt cap and sideplate which I can then get silver plated or I can remake them in solid silver.

I can’t decide how to do the side plate – I suspect that it was a cast  profiled sideplate with sculpted decoration with wood showing through, but it might have been a solid silver plate with border engraving, although in that case I think it would have had a more decorative outline than that now seen.   I think I am going to have to reface the whole sideplate area with an overlay of matching wood, and more or less start from scratch – but not sure what to put there!

Had  a few days to play on the Jover again so I made up a copper trigger guard – combination of bending, welding and silver soldering.  I’ve kept to the same outline as the cutout in the stock – the steel one on the gun didn’t really give much clue as to what the original must have been like.   I did the finial as a relief carving, and put a simple flower in a diamond for the guard engraving – traditional, with slight variations to compensate for the fact that I didn’t get it in quite the right place!  Anyway, here are the pics – you can judge for yourself; 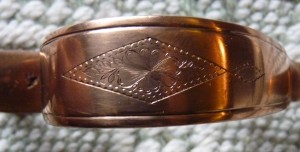 When I got a quote for silver plating the trigger guard I was a bit shocked – £50 plus VAT.  I could have made it in solid silver for about twice that, and the lead time was 5 weeks so I had a look at DIY silver plating.  It looked like it was not easy to make up solutions – some of the online results were rubbish, but I found a website selling plating kits (www.goldn.co.uk – SPA Plating ) and chemicals and it seemed I could silver plate it using their brush technique without filling a large container with expensive plating solution.  To my considerable surprise it worked very simply and quickly.  First I scrupulously cleaned the trigger guard with hot water and detergent, then electrolysed it in the SPA cleaning solution using an old 5 volt power supply and a carbon electrode (trigger guard negative).  Having got it so that water didn’t bead on the surface  (essential for a decent plating job) I used a half a SPA brush with a strip of pure silver up the middle as the brush, and set the power supply to 2.75 volts (trigger guard still negative) and in about 6 minutes had a very shiny silver finish;-

In the end it cost me almost the same as having it plated, but I have the chemicals to do another 3 or 4 comparable plating jobs – the butt plate and side plate come to mind.

I tried antiquing it by tarnishing it by a method I got off the web involving a hard boiled egg, but mine didn’t produce enough hydrogen sulphide to achieve any effect, so I shut it in  a plastic box in which I had burned a little gunpowder, which did a little mild tarnishing – but I decided that at the rate other silver in the house tarnishes, it wouldn’t be long before it got a natural tarnish.  Anyway , a successful outcome, although I don’t know how thick the plating is – by the SPA website  calculator its supposed to be 3 microns, and judging by how quickly it started to plate, I incline to believe them.

A couple of updates on the Jover – It has an engraved silver plate along the wood at the breech end on the left presumably to protect the wood, or possibly as a later repair.  On examination it turns out that it is a carefully shaped part that has an inner skin against the barrel.  I’ll put up a picture but it seems like a very elaborate addition, I’ve never seen one before and would be interested in any information on other examples – ( saw one on a Bales of Ipswich pistol).   Also it has a strip on brass let into the stock under the barrel tang to act as a support and take the force of the nail, rather than rely on the levelling of the wood surface – again I’ve never seen this before although I suspect it is not that uncommon. 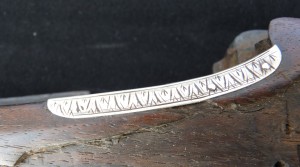 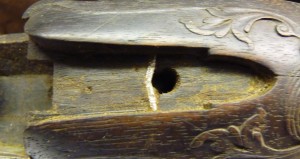 New Jover sideplate made in copper plate and siver plated by the brush method, then antiqued lightly.