Allan Owens mentioned at the last Anglian Muzzle Loaders’ shoot that he had a gun he wanted to rebuild as a Scottish gun as he has links to Scotland, so I thought that I’d have a look at what sources I could find, and as I was looking for a theme for a bit of practice, I decided to devote my beautifully polished bit of steel to a Celtic theme – nothing to do with the success of the SNP in the general election, although there might be a market there!

This is the finished test lock – not too bad, but need to flow the leaves a bit better in one or two places, and maybe it should have had a small thistle at the toe of the ‘lock’?  The thistle heads on the lock are not quite as good as the right hand one above.

My research turned up a few guns engraved in a Celtic style in Douglas Tate’s book ‘British Gun Engraving’, but these are mostly strapwork, which I judged to require more precision than I can muster if they are not to look a mess.  In the end I decide to use a ‘rope’ border and a thistle motive – there was one gun in Tate, engraved by John Salt, that had a stylised thistle which I used as a basis. Google images as usual provides a few general thistle images that helped.  I haven’t found any Celtic styled guns from pre-breechloader days apart from Scottish pistols of the Doune type, so its not really ‘traditional’.

I decided that I was being a bit of a coward not engraving strapwork so I had a go at a simple design – here is the pull and the same with the colour inverted as it would appear on a gun – the original is about 60 mm long.  To be proper Celtic engraving the straps should have angular corners rather than be evenly curved – and the wavy strap needs more detail to bring it to life.  The hatching of the background is a bit uneven too – it was all done in a bit of a rush!   Doing the border broke the points off innumerable gravers – I must get better at cutting out small backgrounds. I have a pile to grind down and it takes ages on my 1200 grit diamond lap – I must get a coarser one for reshaping tools – up date I now have a 260 grit hone on order but its out of stock –  maybe the broken points can wait. 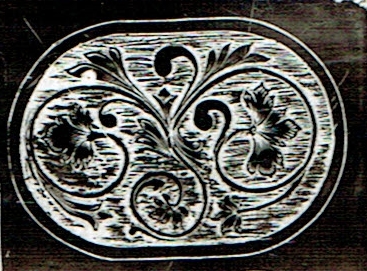 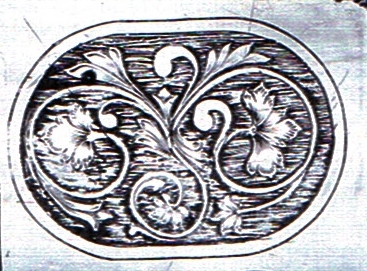 And another little engraving –  classic strawberry leaf – it looks  better in reality because the  contrast between the background  and the raised bits is higher than in the smoked images.