Oct 2019  – I got used to using the M50 and decided to bite the bullet and buy an 18 – 150mm lens for it so I could use it on holiday – That lens is expensive (£400) – it has 17 elements, but I managed to get one from a photo dealer at a little over half the new price – nominally second hand but I can’t see any signs of  previous use – it makes a fantastic lens for video and for stills  – I have the camera mounted on a stand with a tripod head on the table in my office with the led panel above and can take good photos of anything from a large pistol to a small part in seconds – I usually use aperture priority at F6.3 and manual focus with the camera about 18 inches above the table.  The resulting photos almost always show up defects that I hadn’t noticed before when I put them on the computer screen – in fact its a good way of checking work!  If I blow the photos up to the max resolution it gives an image that is part of a 6 ft wide image.

July 2019  -Since posting the original post I’ve started to do some videos to put on Youtube and thought it was time to refresh my photographic setup.  I almost never take photos or do videos looking through the viewfinder, so the essential feature of a single lens reflex camera is wasted.  My ‘old’ EOS 760 D is a good camera but I have to keep kicking it into lifting the mirror and using the screen on the back that I could angle to look at when not directly behind the gun ( it now doesn’t swivel and tilt as I sat on the camera when the screen was extended! ).  I also wanted to be able to record videos at a faster frame rate/higher resolution.  My two lenses for the big Canons are very good – a 60mm macro and an 18 -135 zoom and represent a substantial investment so I wanted a mirrorless camers with interchangable lenses that offered full functionality with my existing lenses.  I bought a Canon M50 mirrorless with its kit lens (the kit lens, 15 -45 mm,  in case I want a small portable camera) plus a cheap converter to take the bigger old Canon lenses and a wireless remote shutter release.  I also bought a small battery powered  HDMI  screen that I can use to monitor videos while I can’t see the camera.  I made a couple of stands to use on tables etc instead of a tripod, and bought another tripod head with the Manfrotto mounts so I now  have two sets.  This makes it easy to have 2 cameras running for videos so I can cut in and out of closeups during editing.   The stands are very steady and fully adjustable and the cameras can be clipped on and off very quickly.  I have installed a 450mm square white  LED panel ( equivalent to 50 watts) on the ceiling above the table in my office and now tend to take photos and make videos there.

Photography is an important part of this blog – without it the blog would be very dull, and I try to put up a photo as often as possible – so I need to be able to take pictures quickly without a lot of fuss, and they don’t in general need to be of fantastic quality.   Most of what I’m working on is small so I don’t often need to be able to photograph whole long guns.    To make it quick I have a camera set up permanently next to my  engraving station so that I can photograph things in a  minute or two.  I keep a board covered in green felt as a background and the camera is mounted on a good quality  full adjustable tripod ( Manfrotto) and has a remote shutter release so I can take long exposures if necessary.

My main camera was a Canon EOS 760D  with a EF-S 18 – 135 zoom lens that allows me to photograph anything form a lock to a cased pair of duellers on my bench.  I have it more or less permenently set a f6.3 on the Av setting as a good compromise – the resolution is quite dependent on the aperture and is optimum at f4 but f6.3 gives a slightly greater depth of field, which is useful.  I use the camera set to ISO 800 for reasonable noise performance.  I do have a  superb  60mm Canon macro lens ( expensive, even on ebay)  that probably takes much better photos than the 18-135   but its a pain dealing with a fixed focus lens and I am not usually looking for high resolution.   I normally rely on the fluorescent tubes in the workshop for lighting – there are lots, although the photo bench is below a window that only gets sunlight in the late afternoon ( it has a diffuser curtain if necessary) – I also have a multi LED white light that I can handhold and point to the object or the ceiling as necessary to light the subject.   The lens runs in image stabiliser mode with a remote shutter release and with the available lighting I probably get exposures of between 1/4 and 1/30 of a second – fast enough for most practical purposes, especially as I almost always use the camera with the image displayed on the back screen so that I can readily choose the area to set the focus on and then magnify it up to x10 and manually focus. ( The camera is also mounted too high for me to see through the viewfinder – my one gripe with the Canon is that the camera doesn’t really like operating with the screen as the viewfinder and  switches it off after about 15 seconds). I also use the screen display to adjust the speed up or down a few stops to give the best exposure if the normal setting isn’t right. Using the screen display means that the SLR mirror is already up before the shutter is fired, so there is no movement due to the mirror moving during the exposure.  It all sounds a fiddle but in fact its very quick  – with the remote in my left hand ready and my right doing the focus controls  its a few seconds to get a picture – I usually take 3 unless its clear that the lighting is optimal, using the hand held light as a supplement in different positions etc……  The flourescent tubes in the workshop were a mixture of cool white and warm white, but I have now ( Aug 2017) changed them for daylight tubes and the colour balance is much better – I still need to even out the illumination somewhat but I have bought a 50 W daylight LED panel to try out for that.

I use the free software  Photoscape  to edit pictures – normally all I do is correct any tilt, crop to the best outline for posting and resize to 1200 pixels horizontal as this is OK on most computer screens and it saves download time on slow systems.   I do have software to connect my camera to my computer, but its easier to take the memory card to the computer.  Only occasionally do I have to correct the picture quality in Photoscape.

Photos are uploaded into WordPress as 1200 (occasionally 1600 for detailed pics) pixels wide, but the editing in WordPress lets you change the size of the image that is downloaded  in the normal browsing mode and again saves download speed.  If you click on the picture you get the full 1200 0r 1600 resolution.  Wordpress limits the size of photos you can upload – its more than I use but less than the full resolution of the camera, so if I try to upload a picture that I’ve forgotten to ‘shrink’ to 1200 pixels it won’t let me.  Wordpress is a fantastic piece of software – without it this blog would be a pain, with it, its a matter of seconds to edit something and then look at it on the site.   New content can be added more or less instantly, and the security is very good – it has protected the site from a great many attempts to hack into it.

I also have a Lumix FZ38 which is versatile and handy for travelling  but doesn’t compare for low light indoor picture quality with the Canon.  Interestingly my phone (Moto4G) has a higher resolution than the Lumix, but takes much worse pictures – still its handy if I haven’t got a proper camera with me. 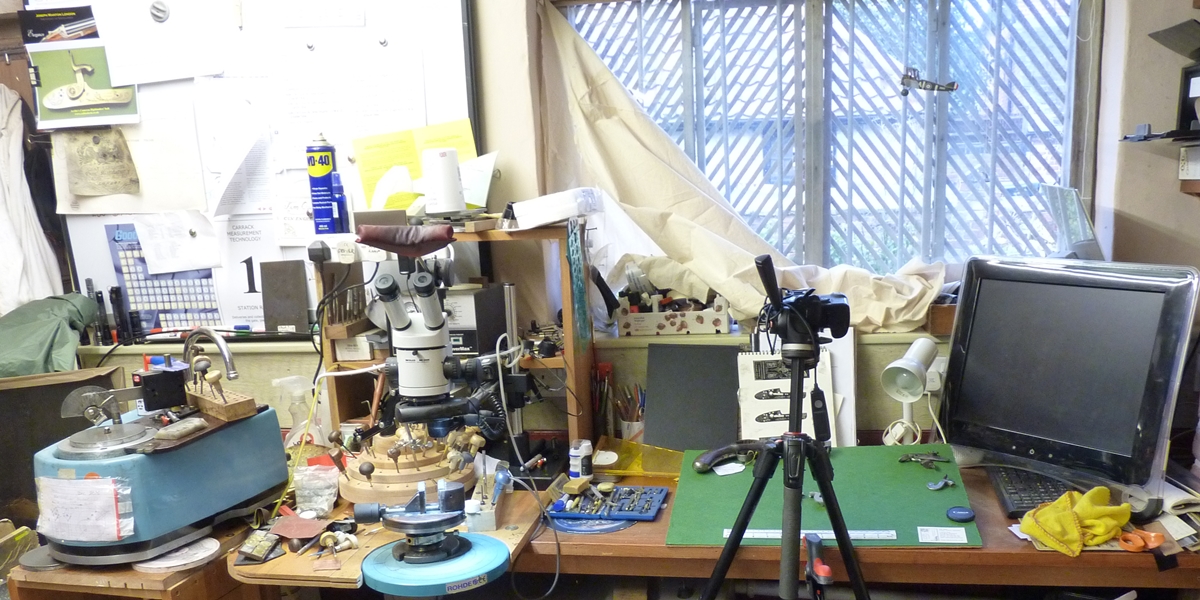 Here is my photographic studio  – on the far left is my sharpening hone with 3 wheels visible, and my microscope and vice on the turntable – behind that is  the GRS  gravemaster controller.  There is a small sink behind the hone. The computer is an old one I only use for  CAD applications. It is, as always, a jumble of tools and work, but my defense is that its a dynamic jumble!  It gets sorted out every couple of days, would you believe it! You just  need a whole lot of kit all within easy reach without getting up as its a pain getting on and off my chair because there is rather little room for my legs under the turntable ¬ the distance between my eyes and my lap being the limiting factor!

The little  aeroplane  flying over the bench is a Sopwith Camel. 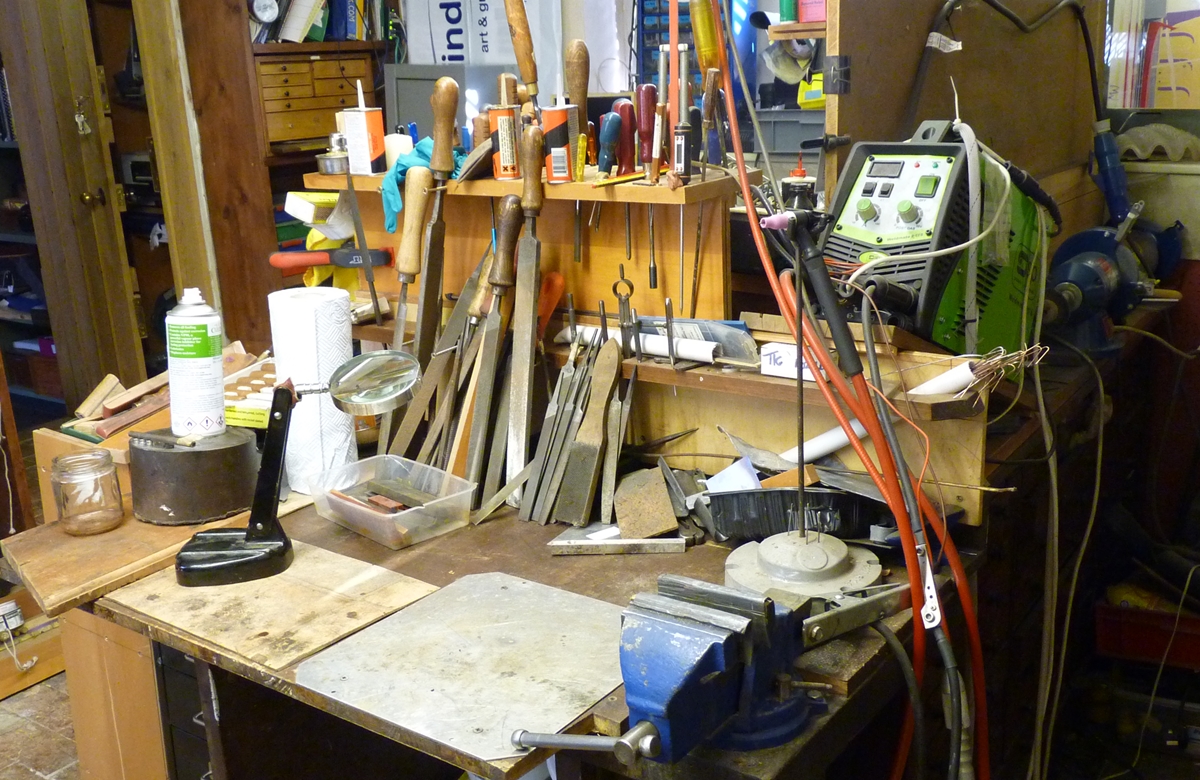 This is my  hot working and  cutting /filing bench – my TIG welder is on the right.  The round lump under the aerosol on the left is a chunk of railway axle used as an anvil. 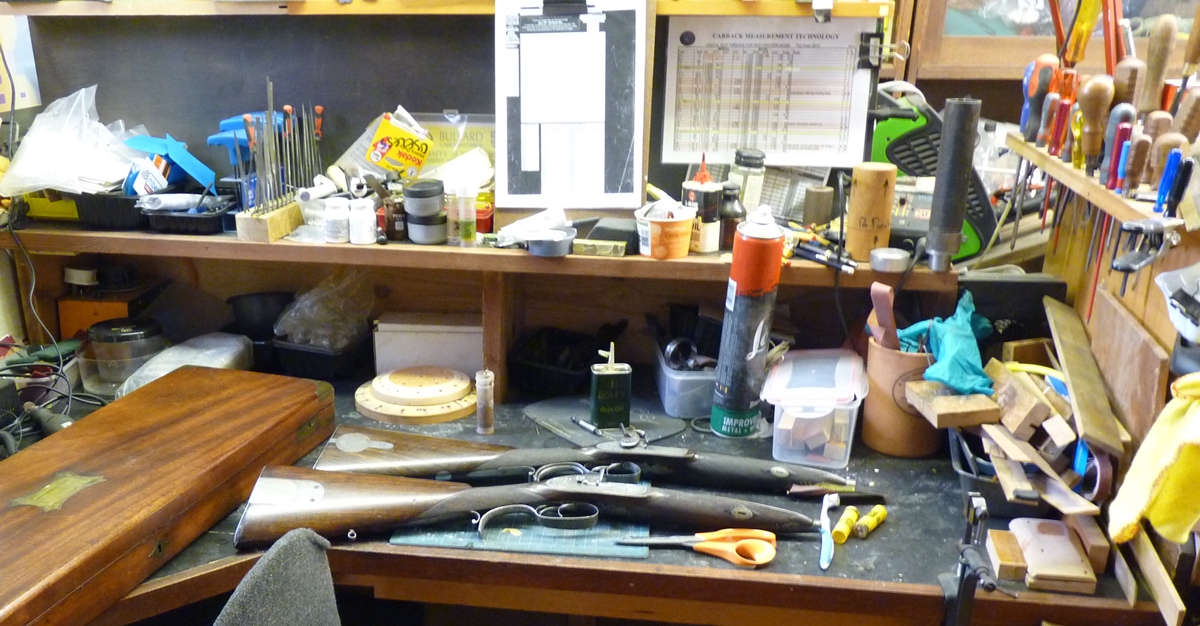 This is my assembly area for fine working etc.  The guns are my two Lancaster oval bore rifles – I’m in the process of fitting the cocks to the restored one.

My lathe, linisher and small milling machine etc live in part of my shed where I do dirty metal hacking and grinding, I don’t do any fine gun work there apart from use the machines.  My shed also has a woodworking section with a radial arm saw, a bandsaw, a decent sized woodturning lathe and a 12 inch disk sander and a router table – I use it for all dusty woodworking.    The shed  also has to cope with all the house restoration and a zillion and one other jobs……