I have been playing with this for a while, but posting it has had to wait until I got back from sailing in the Hebrides, so here it is;-

I bought this from Holts way back as I thought it would be a bit different – I thought that it was probably a conversion from flint, but it is possible that it was made like that originally – it had had some later work done anyway – I’m not that familiar with French guns that I can be certain.   On examination the ‘barrel’ holding the left nipple didn’t match the one holding the right nipple, and was not fit to be fired – you can see above that I  have made and  fitted a replacement – fortunately a 3/8th Whitworth thread fitted the existing hole.   Also the left lock didn’t work as the bents on the tumbler  were badly rounded and didn’t hold the sear, and the cock was not correctly aligned with them so that it tried to cock and half cock in the wrong positions – plus the hexagonal hole in the left cock was pretty loose on the tumbler.   Maybe a replacement tumbler?

Here is what I did… 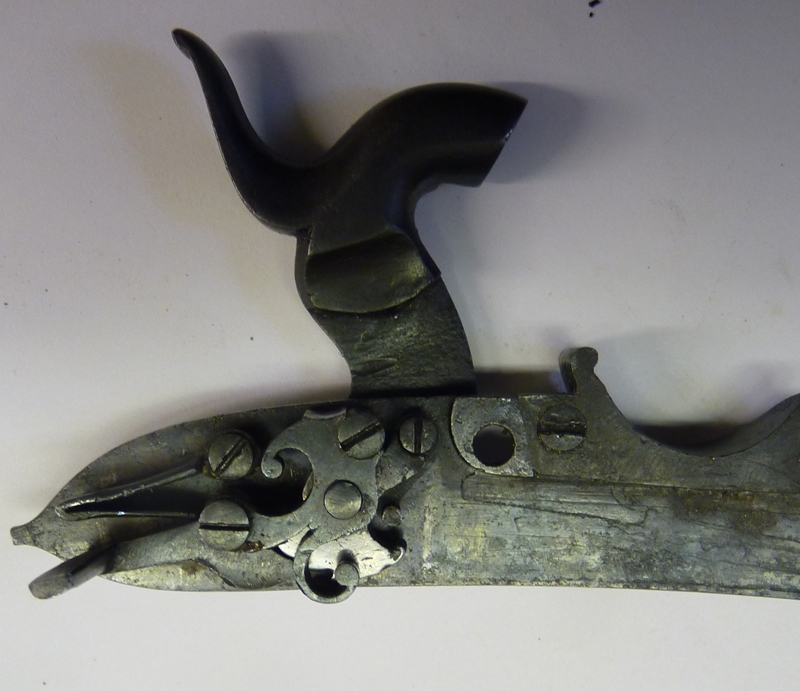 The sear is half way between the half and full cock bents, but the cock is in the full cock position – can only assume that a tumbler out of the scrap bin was fitted at some point! 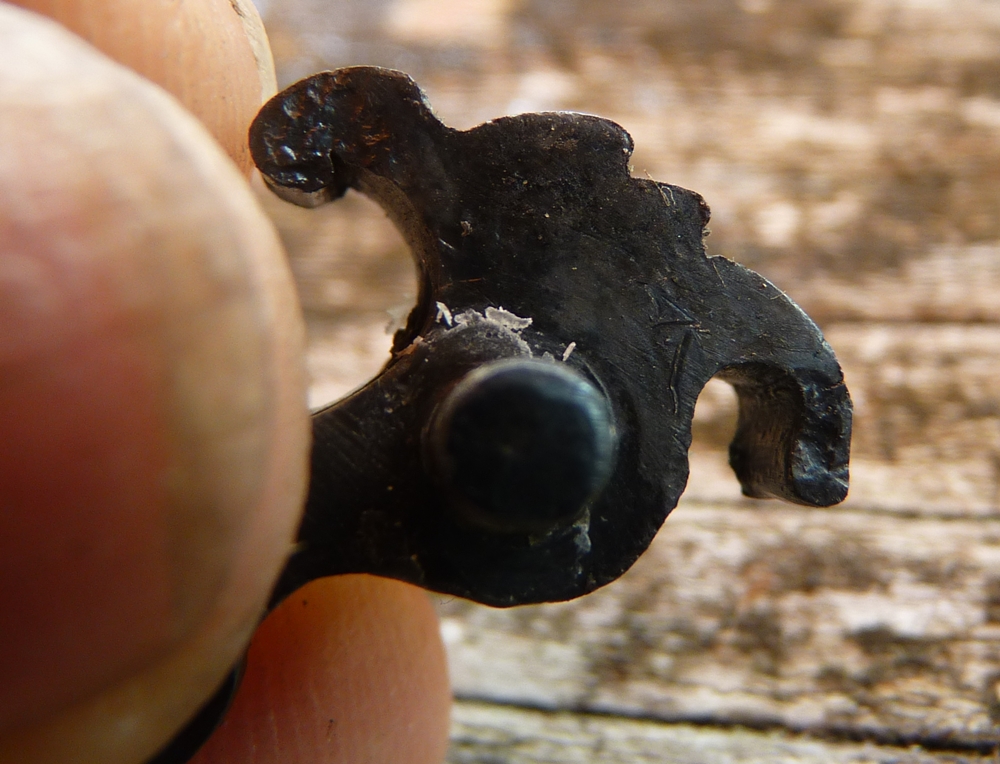 The tumbler is  also badly worn.

Weld building on the tumbler  allowed the bents to be reshaped, but there was not enough room to re-align the cock, so a new spindle was made for the tumbler with a 4 mm shaft to fit the existing hole in the bridle, with  a cylinder large enough to file the required hex to hold the cock.  The tumbler was chucked with its existing cock spindle epoxy glued into a hole drilled in the end of a bar – unfortunately my lathe is a bit large  and the chuck doesn’t  centre things accurately so I often use that fudge.  A 4 mm hole was then drilled right through the tumbler and checked to be a tight fit on the new spindle, and the cock end of the tumbler shaft cut off and filed flush.

Next the new spindle was epoxy glued into a 4 mm hole in a hex headed bolt so the head would act as a jig for the filing of the hex, and flats filed to fit the cock, leaving a bit to go for finishing, and a No 6 UNF hole drilled and tapped for the cock screw.  Applying a bit of heat freed the spindle from the epoxy and it was cleaned and pushed into the tumbler  with a couple of flats filed to accommodate  silver solder-  fortunately a tight enough fit to allow careful adjustment of the aligment of cock and tumbler without it loosing the adjustment – but  leaving a little to be filed off the bents for final adjustment. The spindle was then silver soldered into the tumbler, excess solder removed and final fitting done. 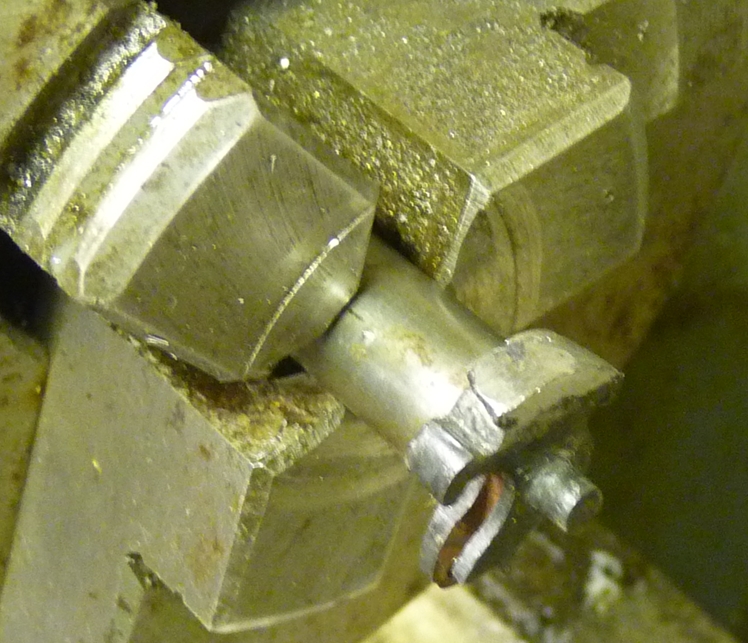 Tumbler chucked with epoxy for drilling 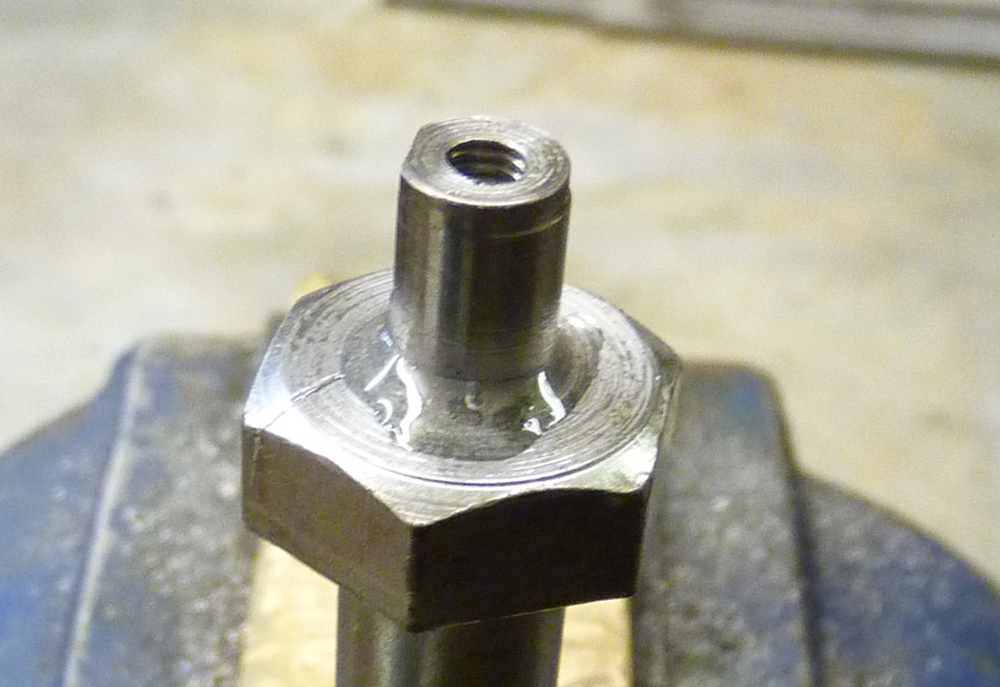 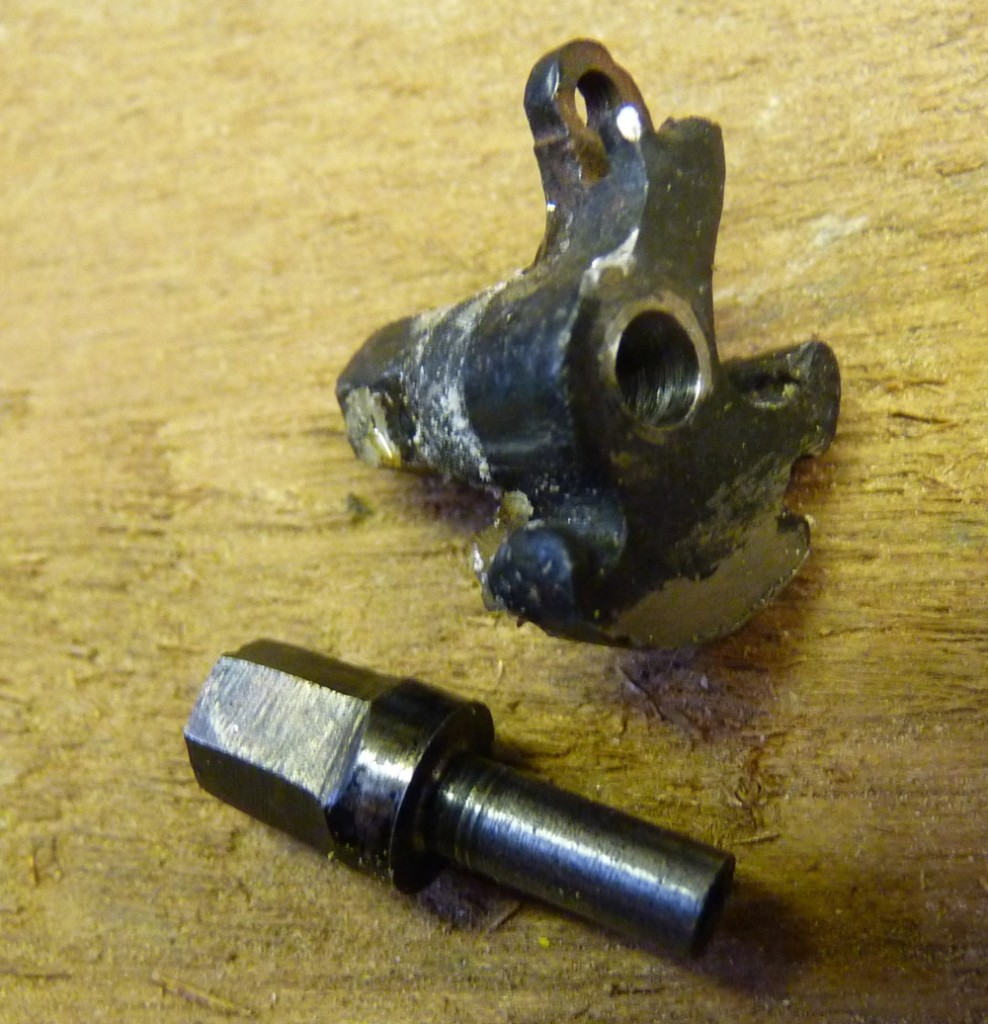 drilled tumbler (old hex not yet cut off) and new spindle – note that one side of the link arm is broken off – that will have to be carefully welded and shaped later, although it works well enough to do the final adjustments.

The blade on the left trigger had been filed down, and the sear bent, so the blade was welded and reshaped to allow final adjustment and setting up.  The back trigger on this gun has rather limited movement, and I had to make the full cock bent quite shallow or there wasn’t enough movement to give the sear its full functionality. 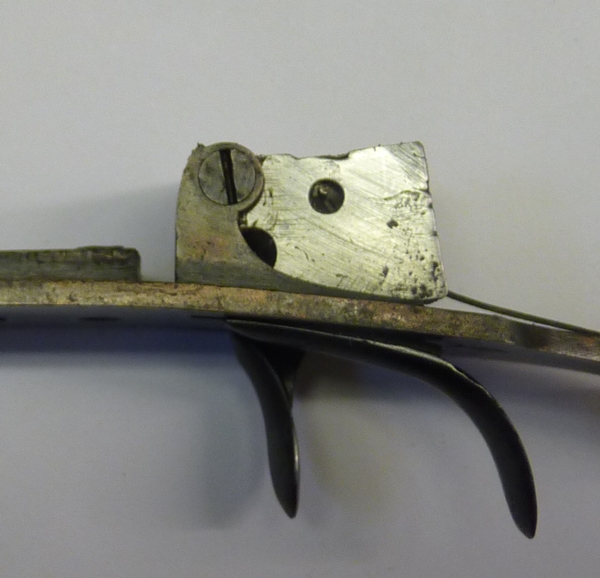 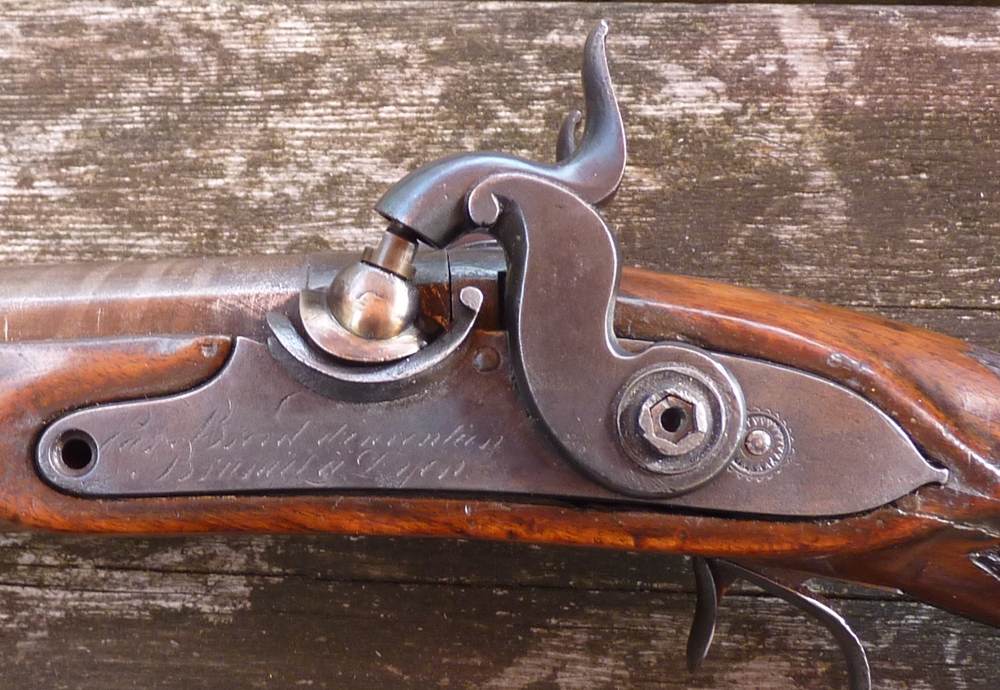 24/8/15   I’ve done a bit more work on this gun – made up a few ‘nails’, fixed the stock and replaced the bolt escutcheons with new silver plates – I still have to make a new barrel bolt and harden the tumbler and sear, but its coming along.  There is a small dent in the barrel that doesn’t come through to the inside – I think it will have to be welded if I am going to shoot this gun – I can’t make up my mind, although I’ll probably not be able to resist a try out.  I’ll post a few more pictures later.

25th Aug  Bit more on it today – made a new barrel bolt – it fits perfectly, much to my surprise, plus hardened the sear and tumbler and case hardened all the nails etc and put it together.  The cocks don’t quite line up with the nipples, they are a bit shifted to the outside. All in all its a bit difficult to see how this gun really worked as a percussion gun so I’m left wondering whether it was a conversion from flint, on one level that seems likely because the arcs round the nipple ‘drums’ are fixed just like typical French flintlock pans, but there are no signs of any fixing for frizzen springs anywhere, and the engraving covers all the space on the lock. Anyway if I can get the small dent in the barrel welded I’ll probably give in to the temptation to try it out – at least see if it fires caps with its misaligned cocks.

I finished hardening the tumbler and sear and cold bent the cocks to align better and took it to Sandringham to put on display along with one or two other  interesting guns from my collection.  I couldn’t resist shooting it and on Sunday I fired it half a dozen times at clays.  I couldn’t get the hang of the large drop of the stock and the small butt plate – I found that it came up to my upper arm rather than into the shoulder like an English gun.  In that respect it reminded me of American Long rifles which also have exaggerated drop – some have very long protrusions from the top and bottom of the butt that preclude putting them to the shoulder, so I conclude that they are also held on the upper arm?  I’d be interested to get confirmation from any experts!