This gun is a rare example of a Jackson design for a method of speeding up combustion in percussion guns by directing the fire from the cap straight into the centre of the breech block. I haven’t yet found a patent, nor do I know if one exists for this design.  Given that the patent breech by Henry Nock added a secondary chamber in order to speed up ignition by setting up a small primary explosion to set off the main charge, its not clear that going straight into the breech would actually achieve what Jackson intended.  One can see why he might have thought it would, because Nock’s design is counter intuitive.  i look forward to trying it out – I wonder if an ordinary video camera is fast enough to capture small differences in ignition speed – I rather doubt it.   Judging purely by the style, the wood and the engraving I would put this latish in the percussion era – very probably post 1840.

The photos show the gun as I acquired it without nipples  – someone had replaced the noses of the cocks and discovered that they foul on the nipples as the cocks have a very small radius – so they removed the nipples so the purchaser wouldn’t notice, and sold it!  that is the sort of c**p that collectors have to put up with, and why you need to be suspicious of every deviation!  Fortunately it will be easy to fix by filing a small amount of the noses away on the underside.

There were several London and Birmingham gunmakers named Jackson who were in business around the time that this gun was (presumably) made, and as there is no address or initial on the gun I can’t find any way of distinguishing between them.  The gun does have Birmingham proof marks under the barrel and on the breeches, which suggests Birmingham manufacture but is not a guarantee.  More work needed!

A John Jackson (1845 – 1880) of  of 49 Ellis Street, Exeter Row, Birmingham was advertising a a patent centre fire breech loader in 1862 so may have been the man, on the rather weak assumption that he was an inovative gunmaker.

The wood of the stock looks the sort of thing that came in around the time of the breech loader – it makes me wonder if this was the last fling of the percussion gun? 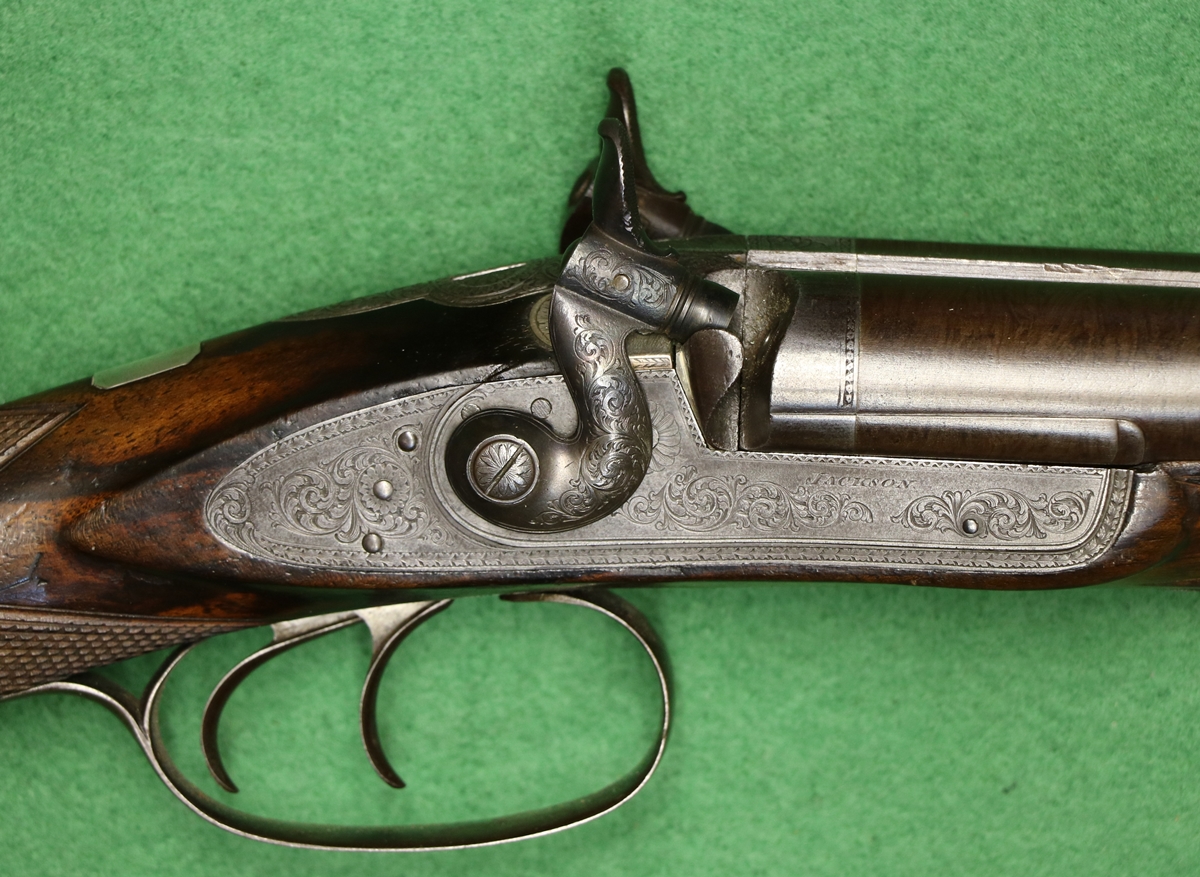 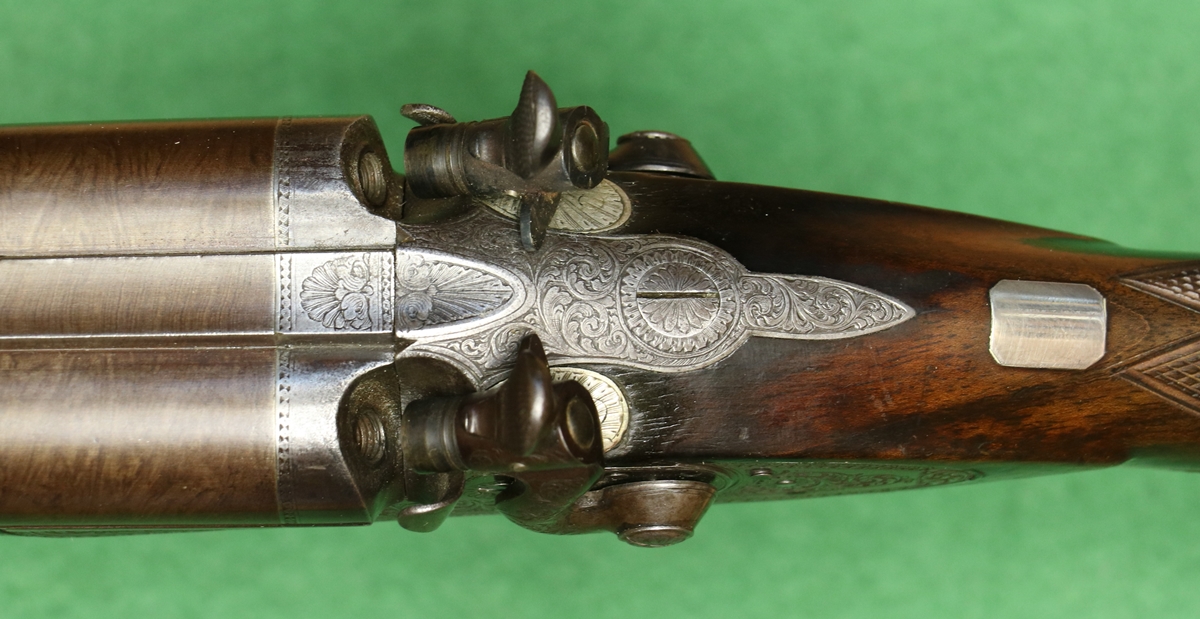 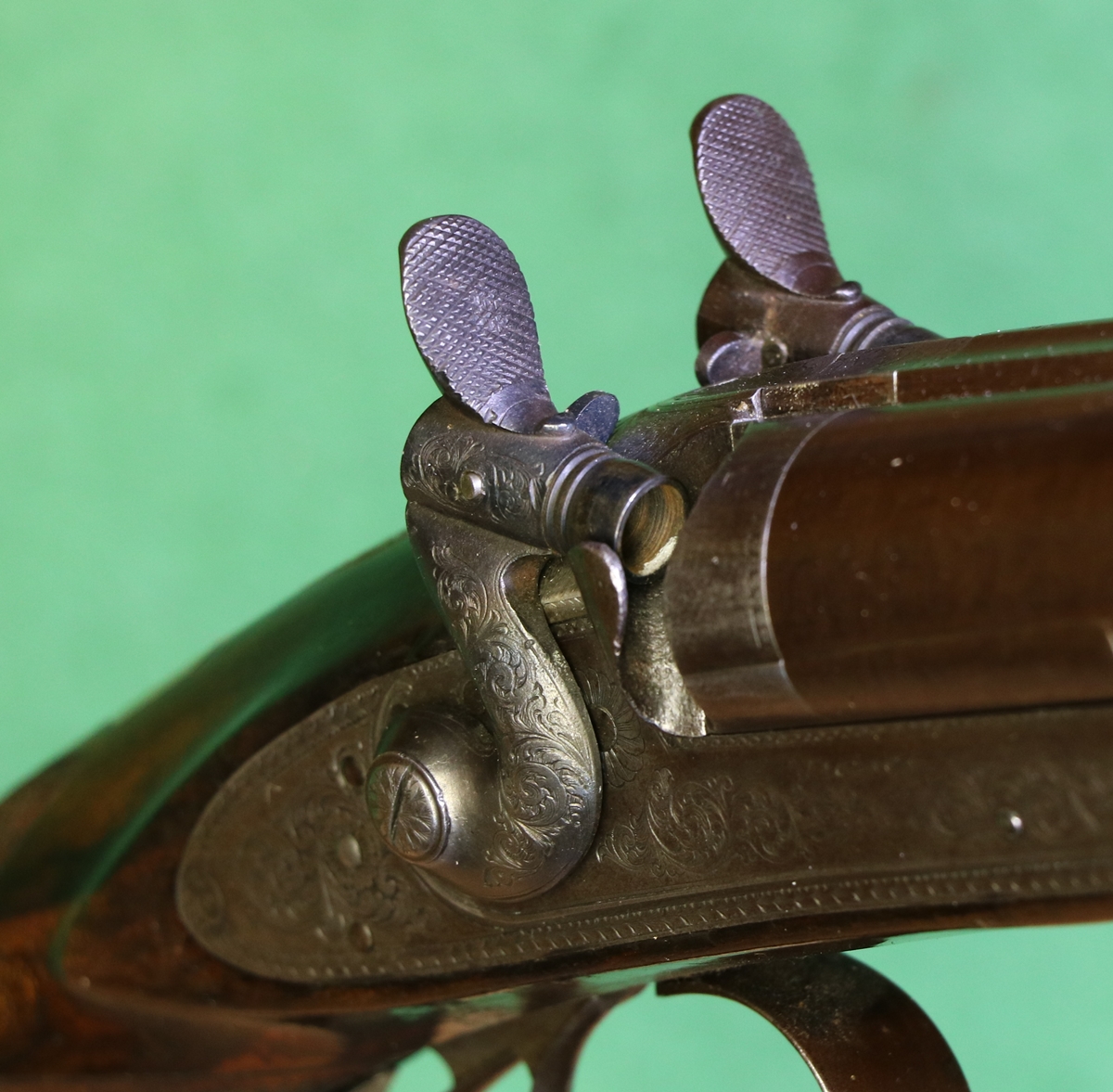 Notice the little ears on the insides of the cocks – in the firing position they shield your eyes from flying bits. Any bigger and they would interfere with the sighting. 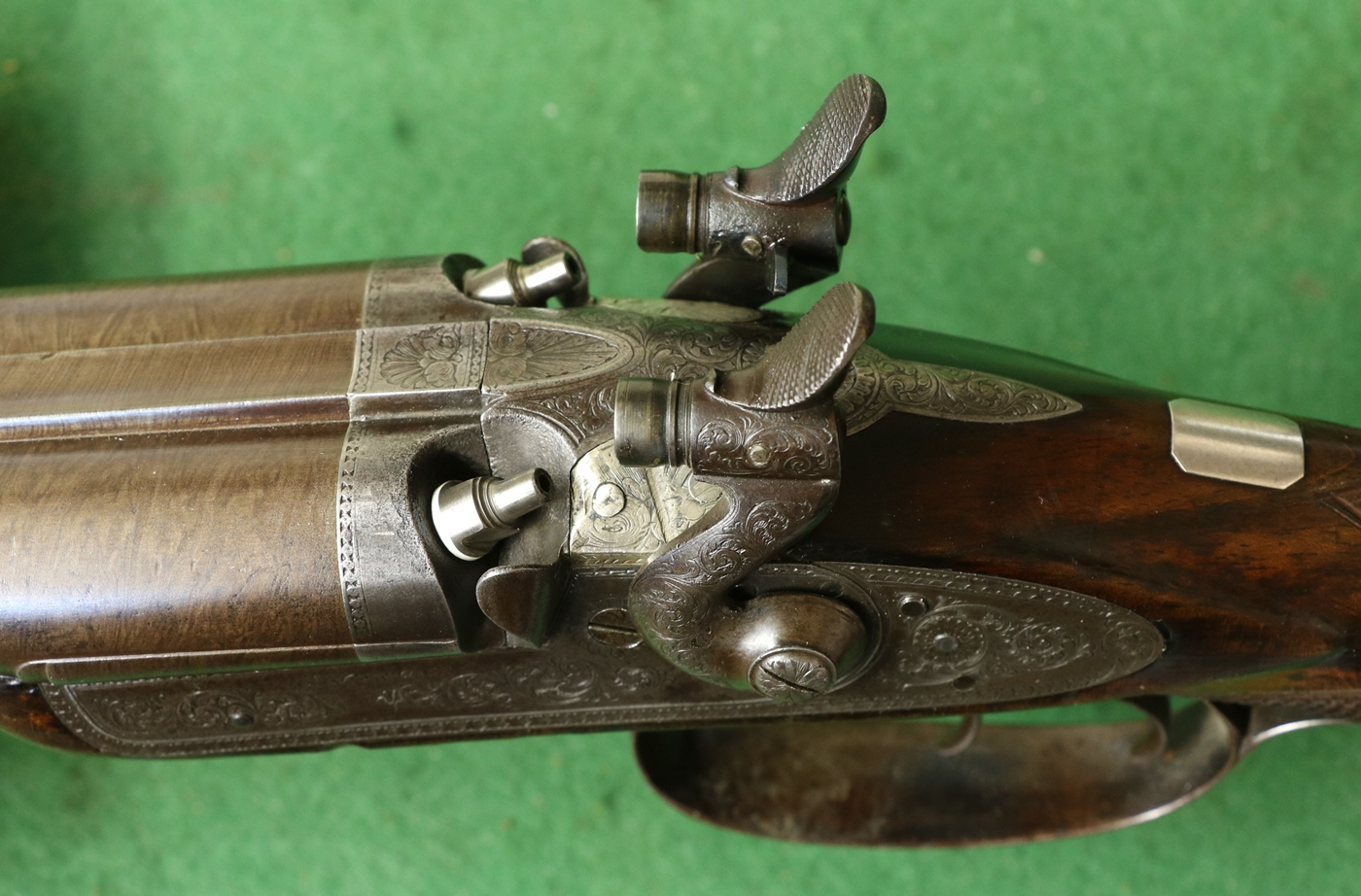 Now fitted with titanium nipples –  the skirts of the cocks just about foul the tops of the nipples, – certainly with caps on the nipples.

Sorry about the fuzziness – the bottom edge of the skirts have now been gently reshaped to clear the caps.

Next job is to raise the dents and dings in the stock and replace the shiny varnish with an oil finish!  That will have to wait a bit.

When I was at the Scottish  M/L championships (2017) I saw a similar gun by a maker not known to me (I’ve forgotten who) made in Scarborough (or, as usual, made in Birmingham and retailed in Scarborough) that had a lot of similarities to the Jackson, including the near central nipples and the replaceable  cock mouths, but lacking the little ears on the inside of the cocks, and without any mention of the Patent.  I must find out more about it – I should have taken a photo but I was more concerned with marshaling all my own equipment