I dug out an interesting pistol from the recesses of the collection I inherited from my father.   It’s French, by the well known Paris gunmaker Le Page and is a large bore percussion pistol firing superimposed charges – it has two cocks and a single bore into which two loads are placed, one after the other.  The right hand nipple leads to the front charge, and the left hand nipple leads directly to the rear charge.  It has a single trigger that releases one cock at a time – if both cocks are at full cock, the first pull fires the front charge, and the second pull the rear charge, but if only the left cock is at full cock it fires that one (corresponding to the rear charge, so it would be a bit unfortunate if it was double loaded and you accidentally cocked the left cock and didn’t cock the right!   Maybe I will take the locks out and have a look at the mechanism that achieves this and put it on the site- I’d like to see how it shoots one day, its a big bore (a 20 bore cartridge just fits into the muzzle) for a relatively light pistol and must have used a pretty small charge.  Obviously you need to get the loading dead right to make sure the flame channels line up with the charges  – I can feel a dummy loading coming on………

I really do need to change the felt on my background 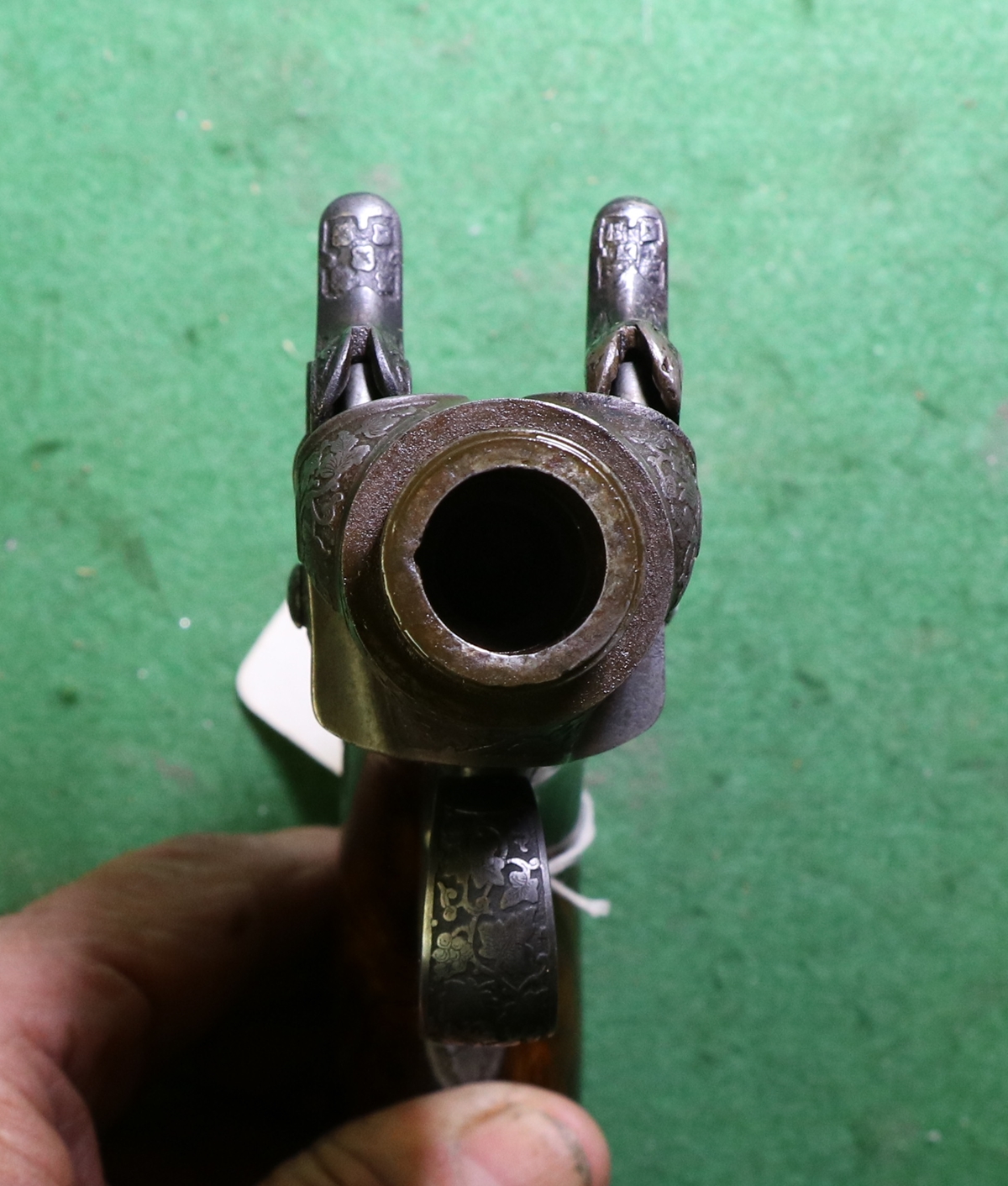 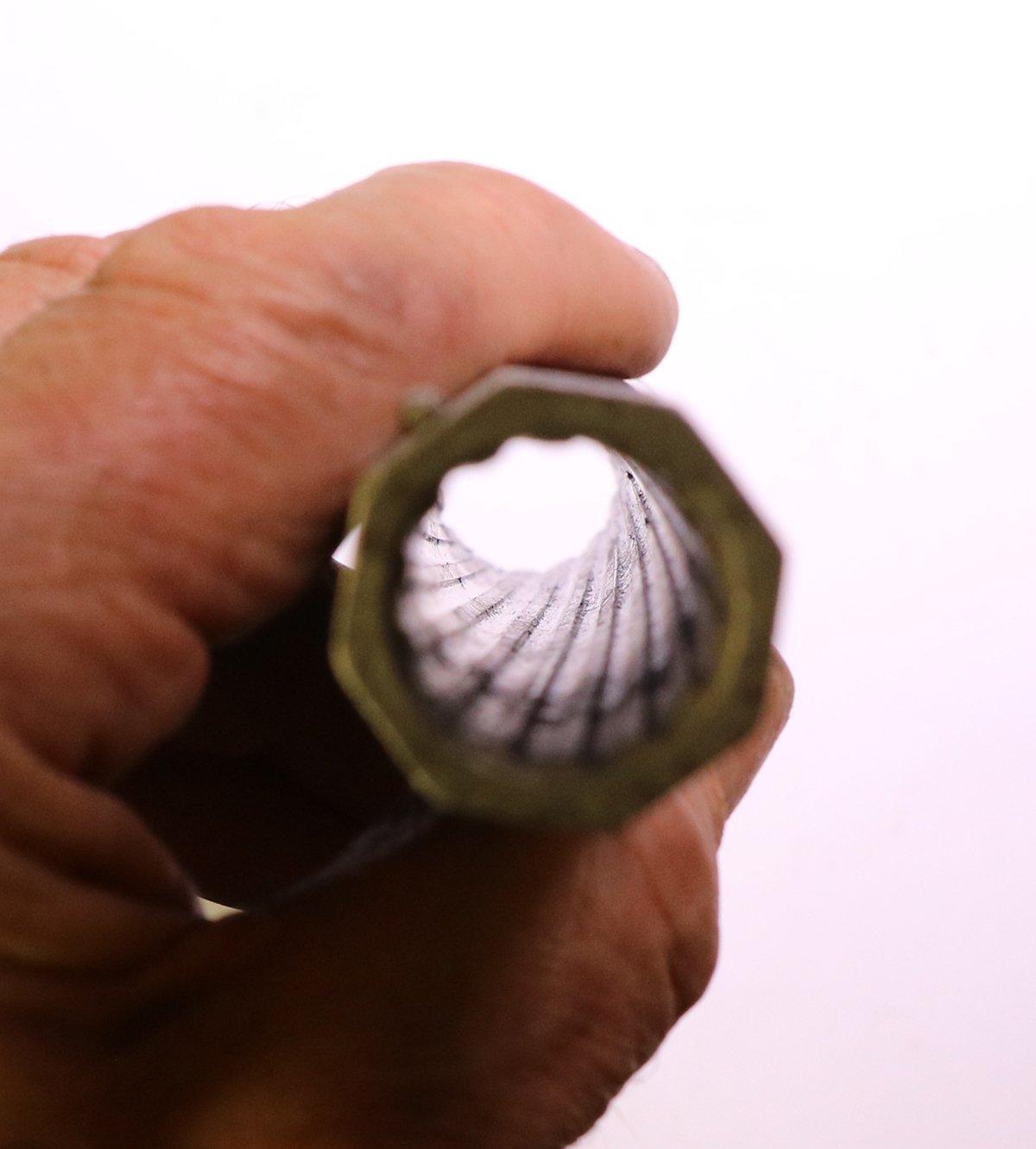 Calibre about 20 bore – with very bold rifling in good condition

I took the locks off the LePage pistol to investigate the single trigger mechanism, but unfortunately I couldn’t get a stud out without damaging it and so couldn’t expose the mechanism well enough to photograph fully, so you will have to make do with a verbal description…   The trigger has a vertical axle sticking out of the top.  pivoting on this axle is a blade the longer  back part of which forms the trigger blade – It sits below the conventional sears and can swing to be under either the left or the right sear. a spring biases it to sit under the left sear.  An extension of the blade in front of the axle carries a stud that sticks out on the right hand side of the blade.  A cam slope on the tumbler of the right hand lock pushes the stud when the right hand lock is fully cocked, causing the blade to swing its front to the left and its back section to the right so that it sits under the right hand sear, at which point pulling the trigger  fires the right hand lock which fires the front charge.  If the right hand lock is not on full cock the blade always sits under the left hand sear and that lock will fire if it is cocked.  I noticed that if both cocks are on half cock the left cock will fire if the trigger is pulled – the half cock bent does not appear to be of re-entrant shape as you can see from the photograph. 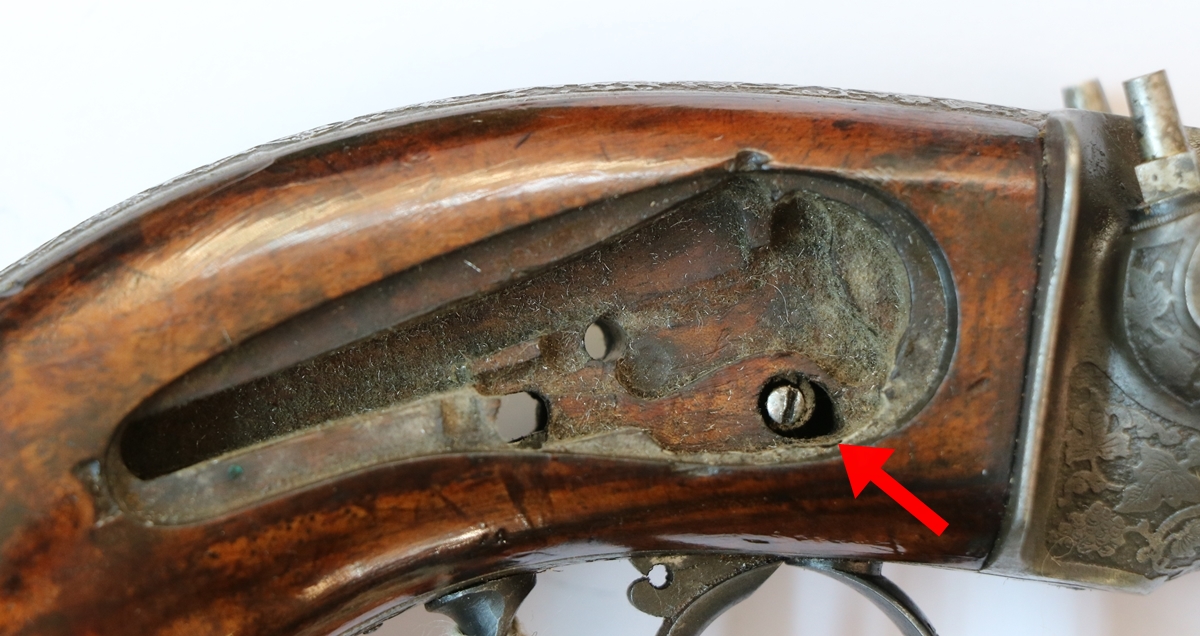 Showing the stud in the blade in front of the pivot. 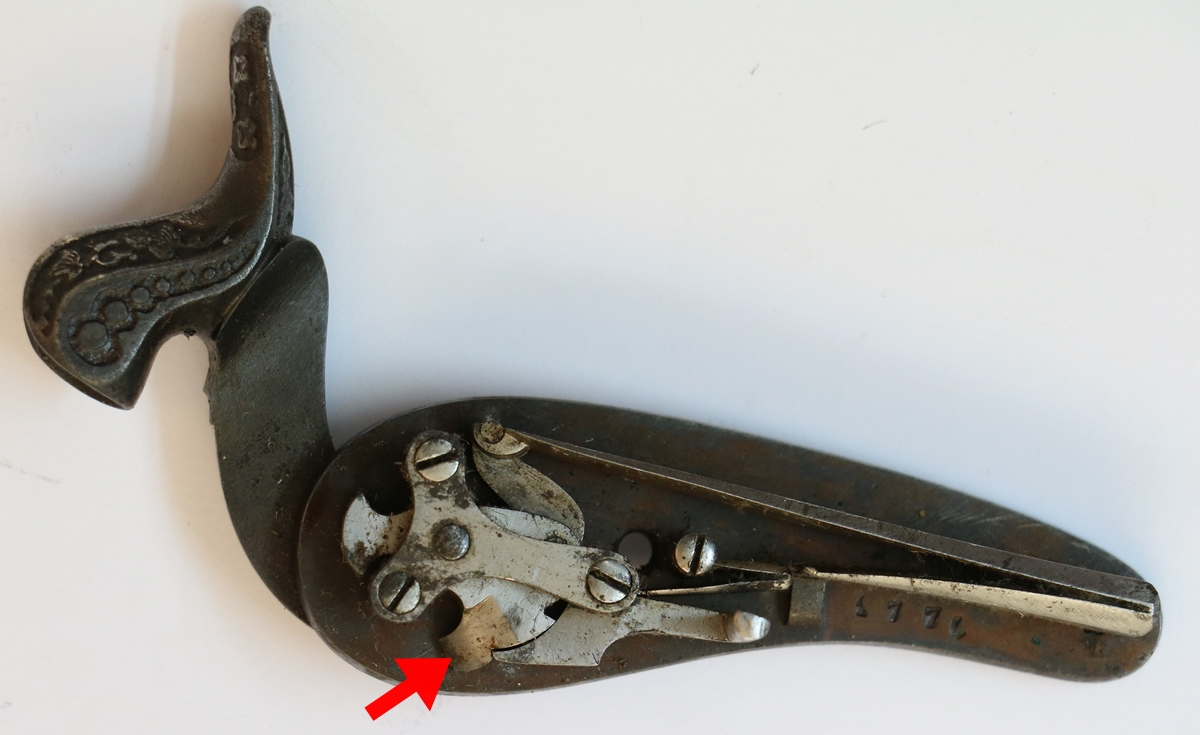 The ramp on the tumbler  that acts on the stud is arrowed.  Notice that the half cock bent is not designed to resist a trigger pull – ergo it is not safe!