I made contact at the Fenland Country Fair with the lucky owner of this Mortimer brass barrelled blunderbuss who wanted it put to rights.  He brought it  to Sandringham Game Fair, and its a beauty!   Well worth doing – the cost of repairs will very easily be covered by the increase in value, although that isn’t the client’s priority – I’m always careful to discuss this aspect with clients because its important that  we understand the context of the repair.  By any standards this is going to be a real beauty when done! 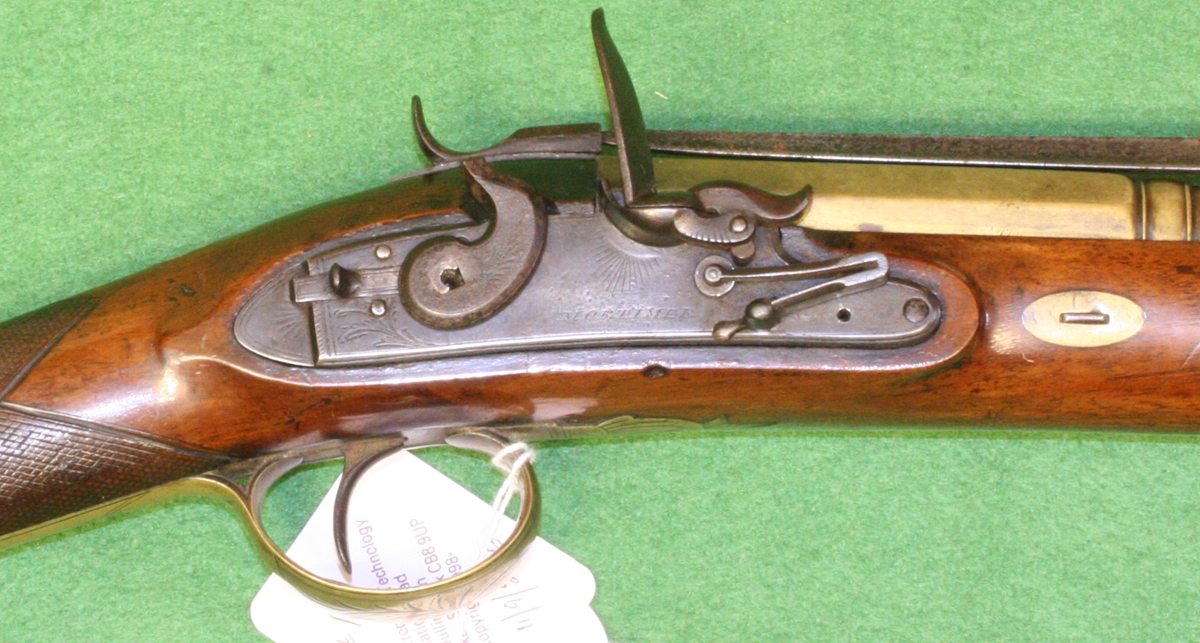 This is a very clean and genuine antique by Mortimer – a very well known London maker, dating from the end of the 18th or beginning of the 19th century – apart from the specific faults listed below it is in good condition, and is best left in this condition after repair – any attempt to tidy up the few dings in the wood or  freshen up the lock plate etc will only serve to raise suspicion that its been more heavily restored!

Hidden inside was a break in the bridle around the sear pin – we didn’t find it until we came to sort out the tumbler.

The first job is to locate a replacement cock – Blackley’s have a number of cocks that might be suitable, but I think we have one of the correct size and shape in stock.  It is possible to graft a new top onto the existing past if necessary.  Making a new top from solid is not really an option – too much work! 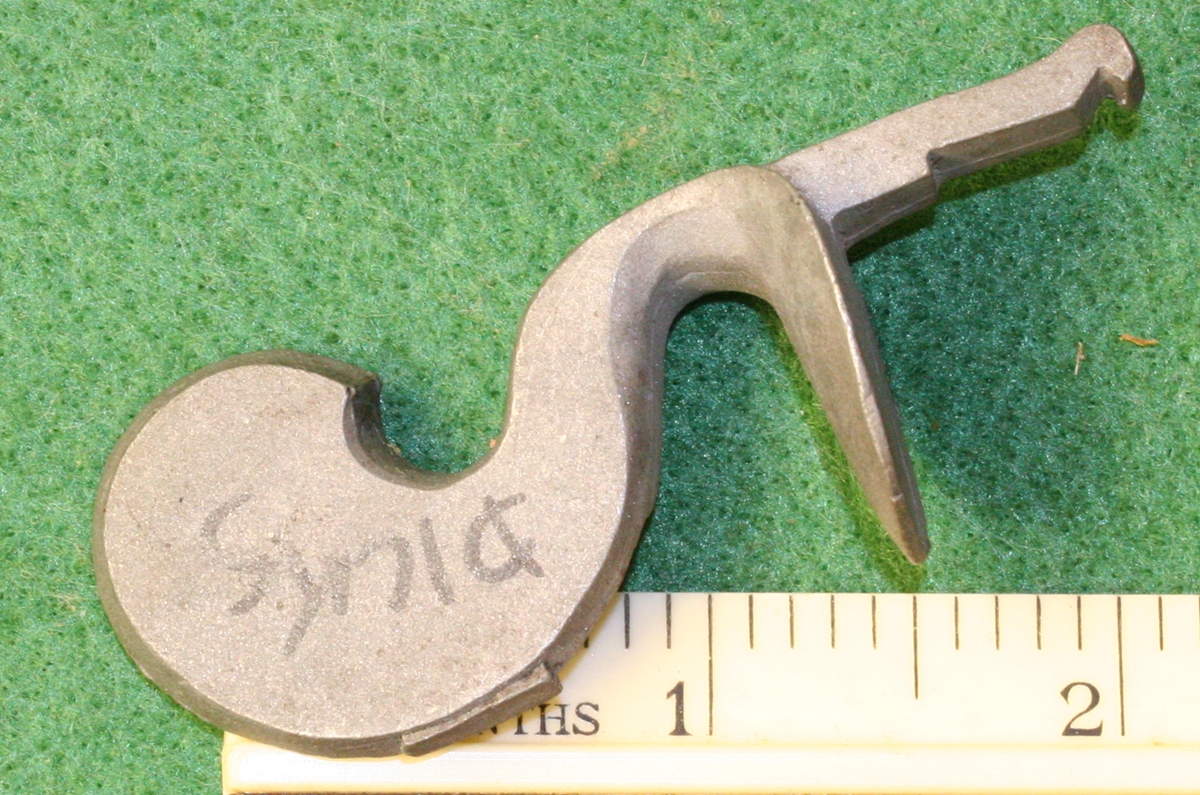 This looks about the right  right size – 1.5 ins from hole centre to tip of jaw

This Blackley cock looks better for the gun (less military), but is a trifle small – it will need the neck straightened slightly.  Its mounted so that I can freshen the engraving.

Blackleys also have a casting for the bayonet spring, but we may fabricate one, or even weld a bit onto  the broken part.

The frizzen screw can easily be made, having regard to the thread in the spring.

The web had photos – courtesy Andrew Bottomley’s site – of a similar blunderbuss by Mortimer that will help get the right cock; 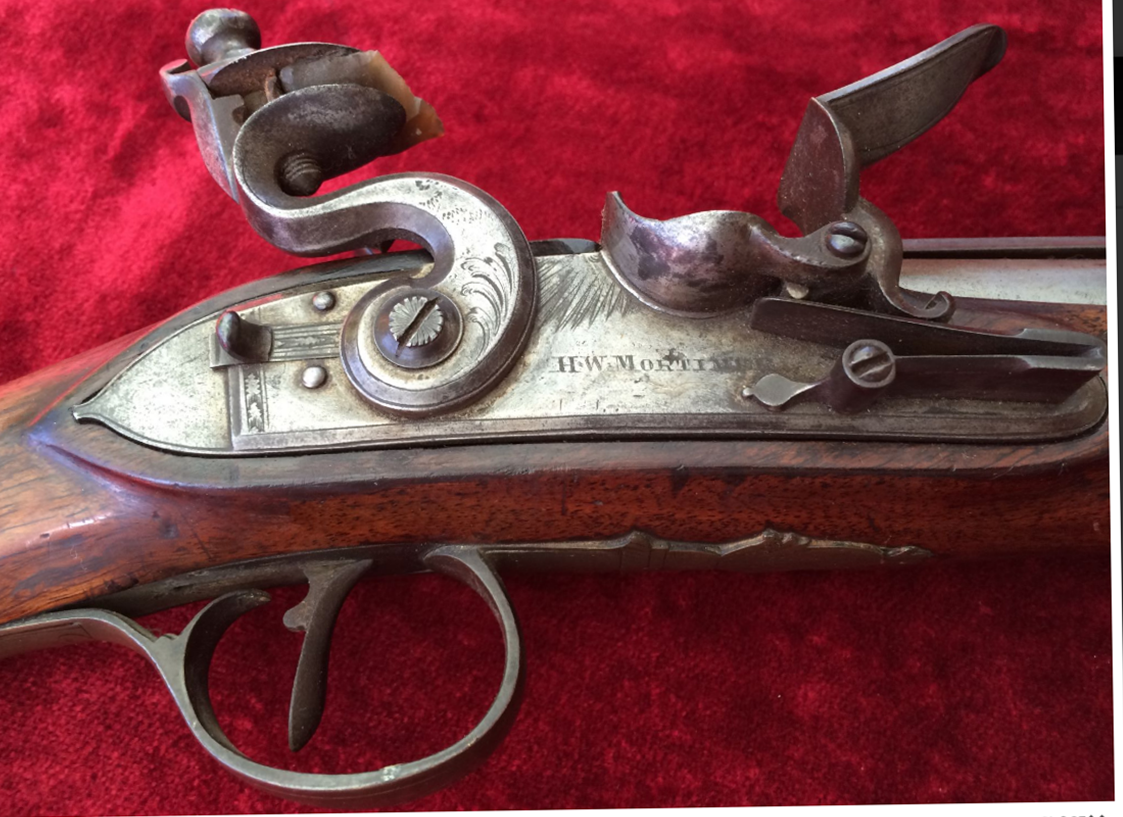 Notice that this one doesn’t have a roller on the frizzen spring – a bit earlier, and iron barrel – its  an older lock shape too.  It doesn’t have the chequering of ‘ours’ – possibly that was a later addition – Andrew Bottemley has it advertised at £3850. Iron barreled blunderbusses are rarer than brass and so fetch somewhat more.

Dick is doing the tumbler repair and we are waiting for a cock from Kevin Blackley, which is said to be in the post, hurrah.  I had a go at making a new spring to open the bayonet.  I filed up a length of spring steel 12 mm x 3 mm x 80mm to reduce the thickness to between 2mm at the bend and 1.7 mm at the roller end, then bent it double at bright red hot and pinched it in the vice, then welded a bulge at 32 mm from the bend for the roller axle. The axle roller bulges were shaped roughly  – the strip was then filed to the right width ( 9.2mm)  and the roller bulges finished and drilled 1.4mm for the axle and a slot cut in the middle for the wheel… 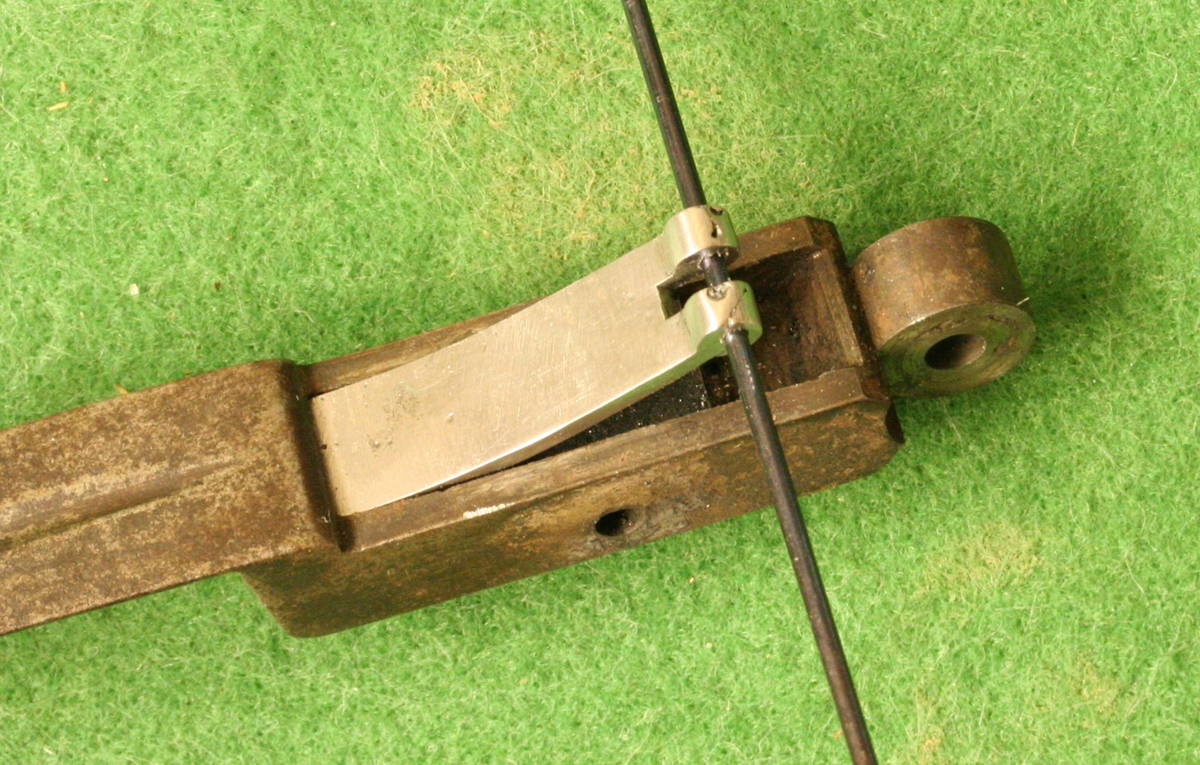 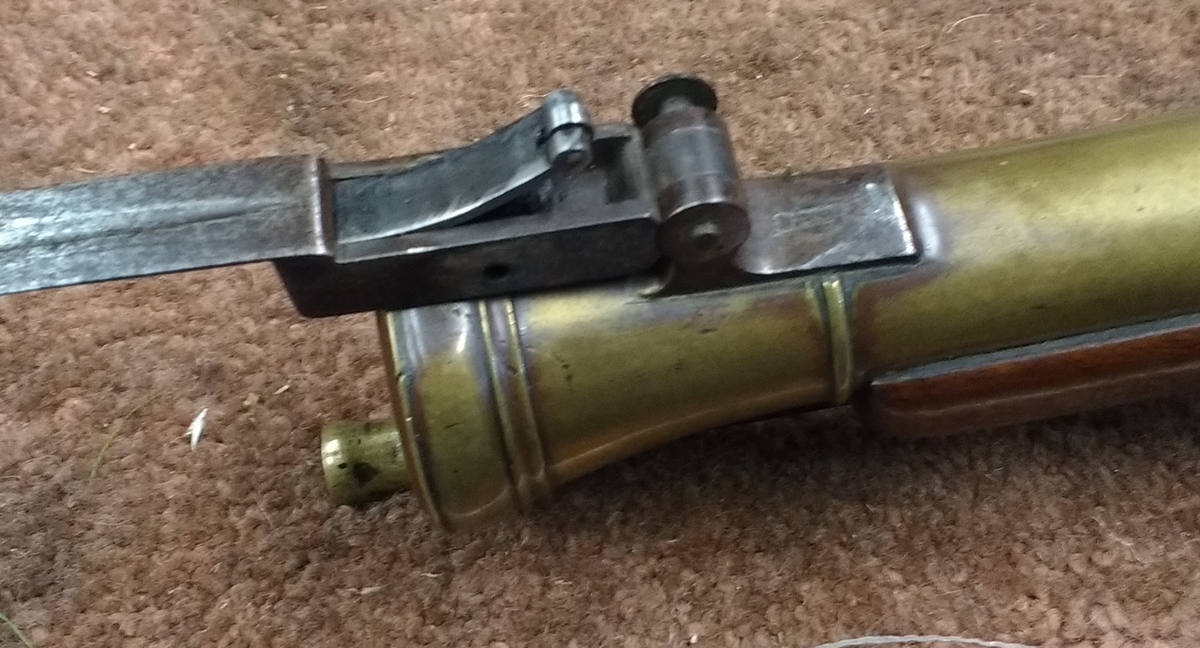 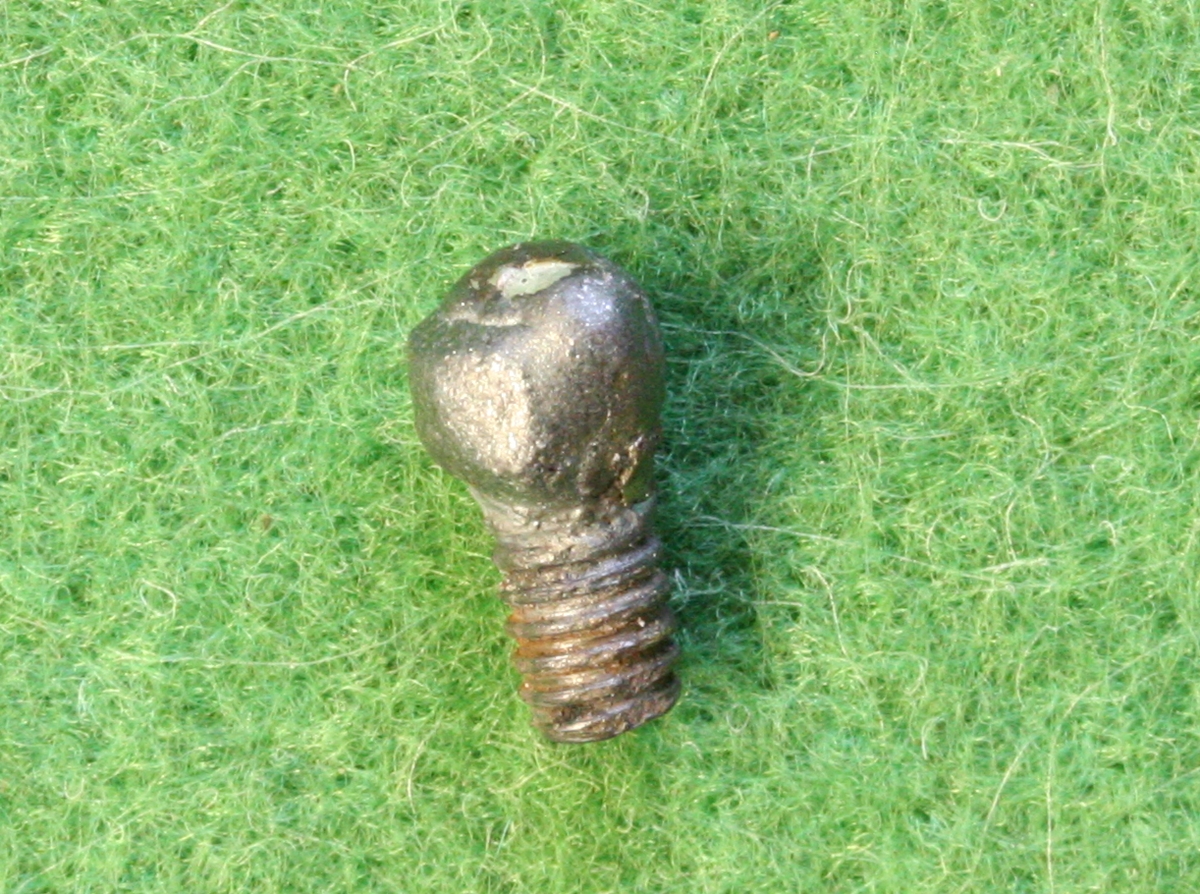 Frizzen spring fixing screw – as normal the head will hardly be bigger than the thread – the blob is only just big enough! 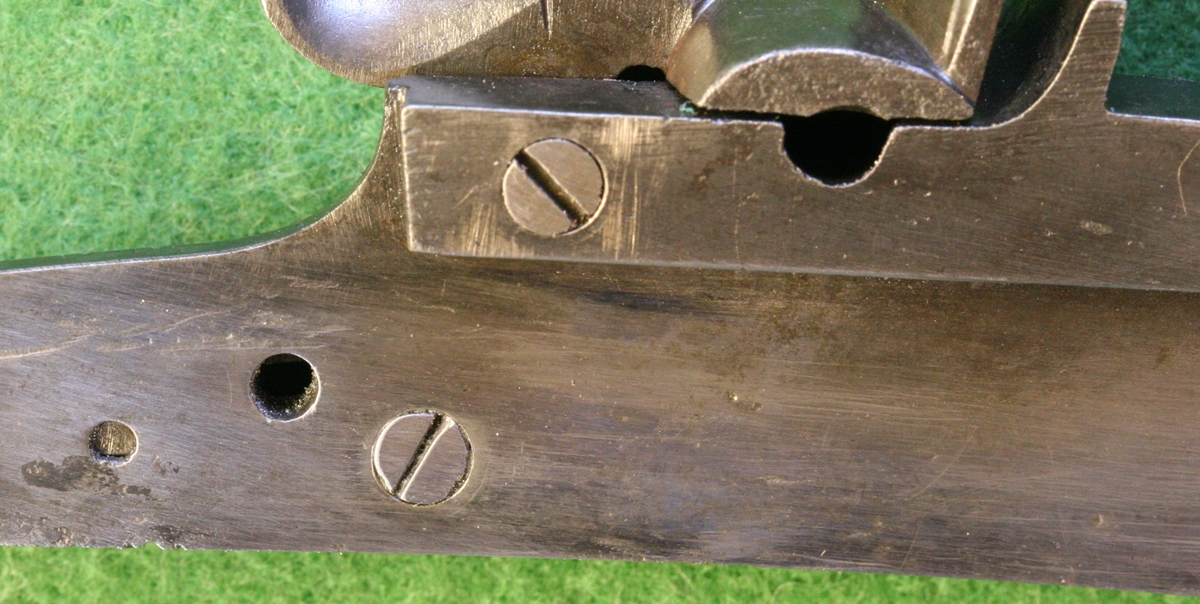 New screw in place ( lower one) 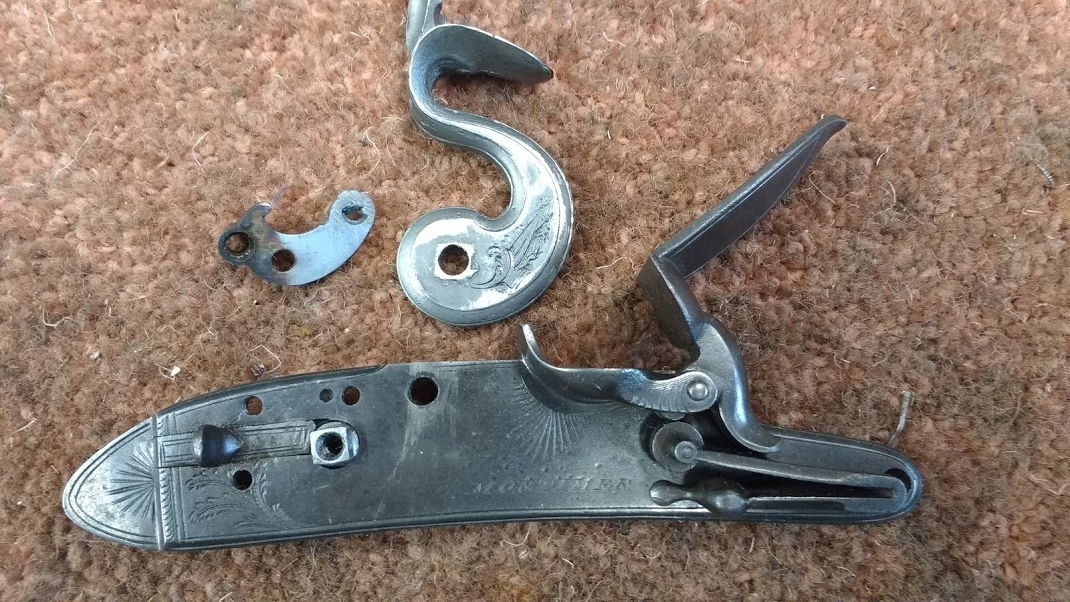 Dick has welded the tumbler – an oxy-acetylene weld –  and also the end of the bridle round the screw hole ( not yet drilled through) – now it just needs the cock fitting and the broken end of the false breech tang welded – probably have to be TIG welded or the heat will  be a bit much as its quite thick. 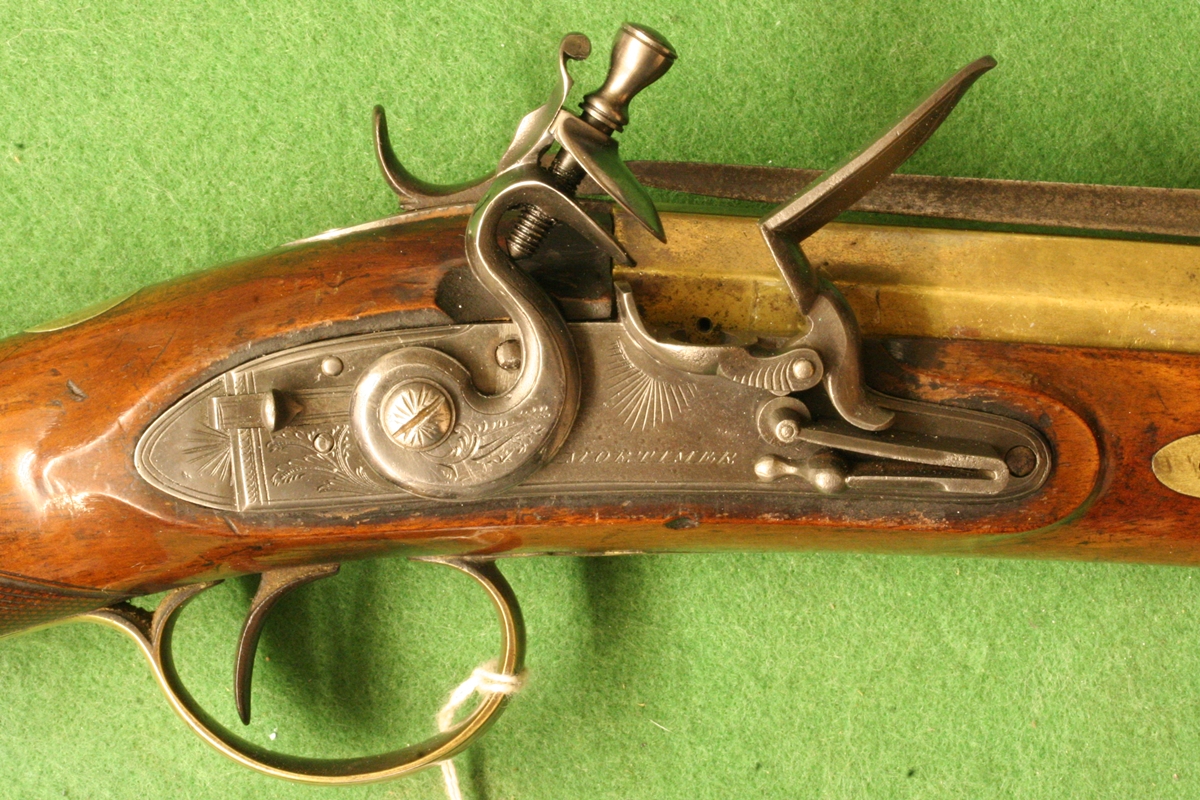 The completed cock – beautifully coloured to match the lock plate, which has cleaned up a treat (just electrolytic derusting).  This is what it was like;-

This is the one for sale by Andrew Bottomley for comparison…. 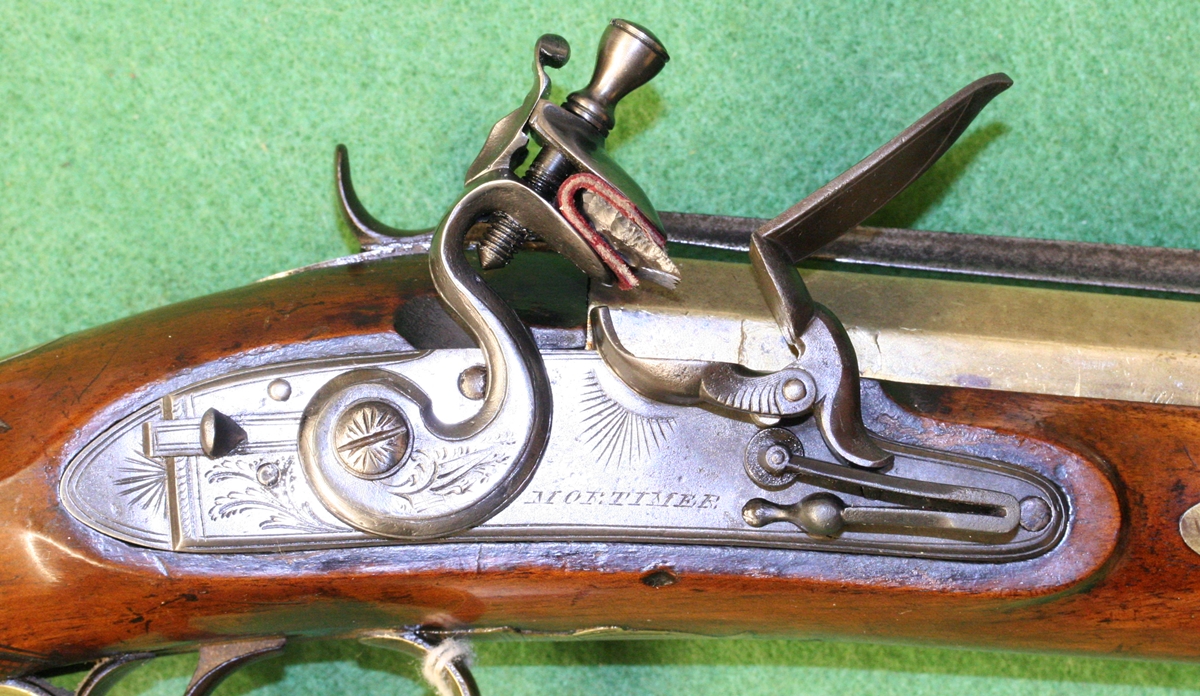 The engraving on the lock is very crisp and there is no corrosion or pitting – it looks as if this gun has hardly been fired, which given its purpose is hardly surprising.

The mainspring is horrendously strong, which we suspect is why the cock broke and damaged the tumbler in the first place – it was possibly a contemporary replacement – anyway I think it needs to be ‘let down’ a bit or the same thing will happen again!  I also need to make the full cock bent a bit more positive, and engrave a couple of lines on the false breech repair….  but completion gets closer……….!

The mainspring was heated to red heat and the bend clamped in a vice to compress it a little, then hardened by heating to red and quenching in oil, then tempering on the AGA hotplate to strong blue colour.  That weakened the mainspring enough that it didn’t endanger the cock if snapped off, but the frizzen spring was then much too strong.  I shortcut some of the process with that and just heated the bend in the spring up to red and clamped it in the vice and  reheated it a bit and let it coll a little before quenching it in oil  It works just fine and balances the weaker mainspring perfectly-it snaps off perfectly but probably wouldn’t do a very good job if you wanted to shoot the gun in ernest – a fairly strong mainspring and frizzen spring are needed her, but probably the replacement cock wouldn’t stand up to much misuse before it went the way of the original – snapping off the cock with the pan open really puts a lot of strain on the cock.

I touched up the engraving round the cock as some of the lines had got filed off in fitting the cock to the tumbler and used instant blacking (TIFOO) to tone it into the finish, I also engraved  the tang and the tang screw.  ;-

For the record, the total cost of the restoration to the client will be between £400 and £500 and probably added two or three times that amount to the value.