I thought I’d put up some photos of the single barreled flint gun that I got from Holts some time ago as a puzzle for you to see how many odd things about it you can spot, and what sort of date you would put on it –  you might find some clues from my Black Powder articles and elsewhere on this site, and W Keith Neil’s book on Great British Gunmakers has clues.    The gun was cataloged and sold as an antique Twigg shotgun – I bought it on its value to me as a shooting gun – the bore is very good, and in fact it has turned out to be a very reliable shooter – of the 30 or 40 shots I’ve fired with it, I haven’t had a hesitant ignition, and only one failed to fire, due to the wind having blown all the priming powder out of the pan, and I haven’t yet changed the flint!  It won’t be the fastest gun in the East as it doesn’t have the refinements that came into  flintlocks from about 1780 onwards such as roller on frizzen or frizzen spring, link on mainspring and Nock’s patent breech or Joe Manton’s stepped breech that speeded up the ignition process.

What do you think?  Here are some photos   I’ve put a few questions under each to help the less experienced…….. 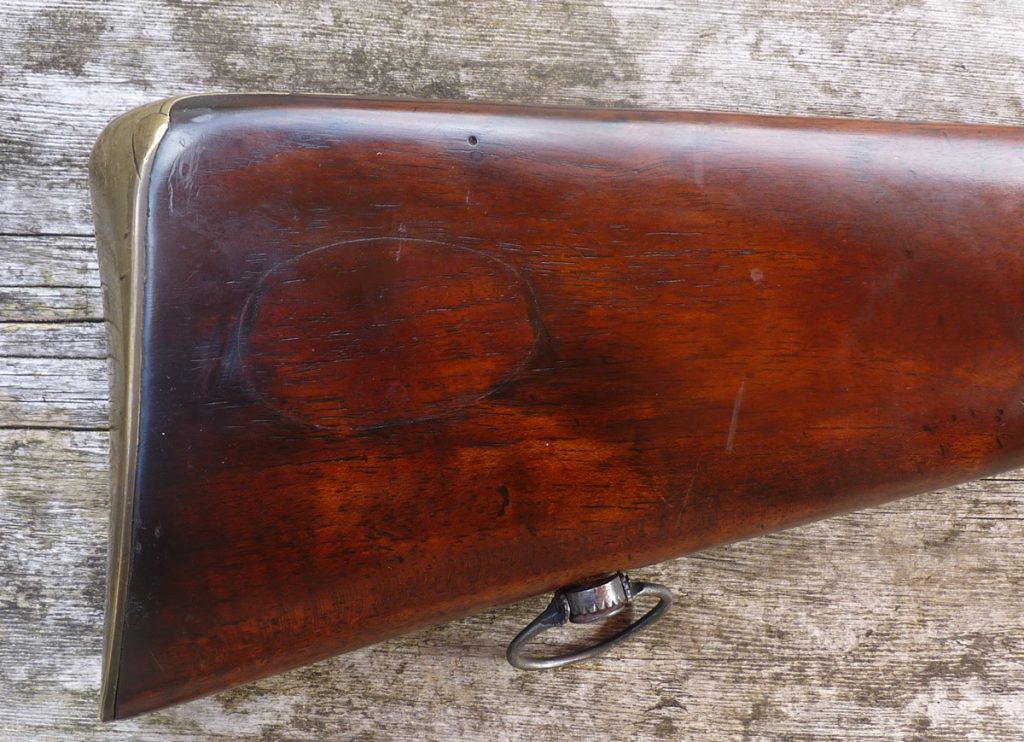 What do the repaired patch and the swivel suggest to you?  Or maybe ? 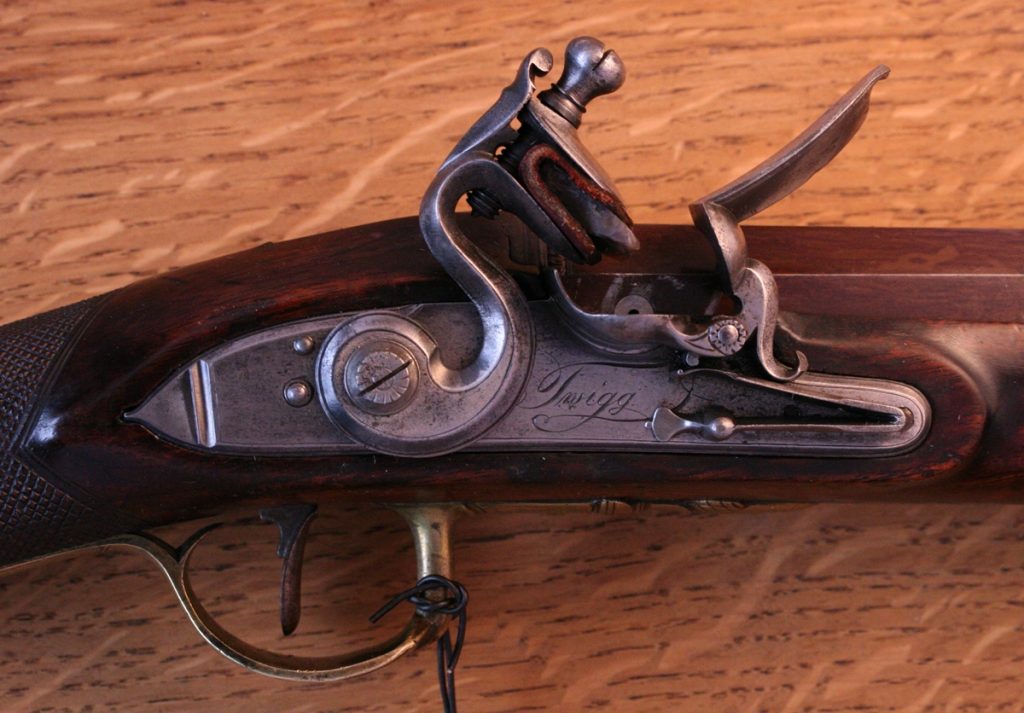 That looks like the third form of Twigg’s signature – its very crisp, and possibly the tail of the first ‘g’

goes a bit far to the right ?   The lock is missing the little ‘v’  notch in the top edge in front of the cock. 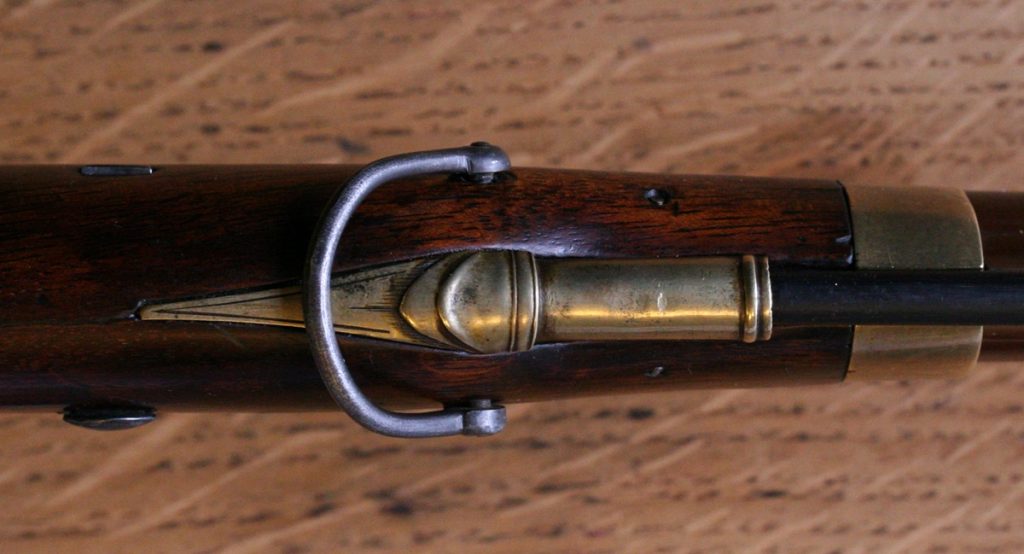 Here is the front swivel and the entry pipe, which looks pretty original. 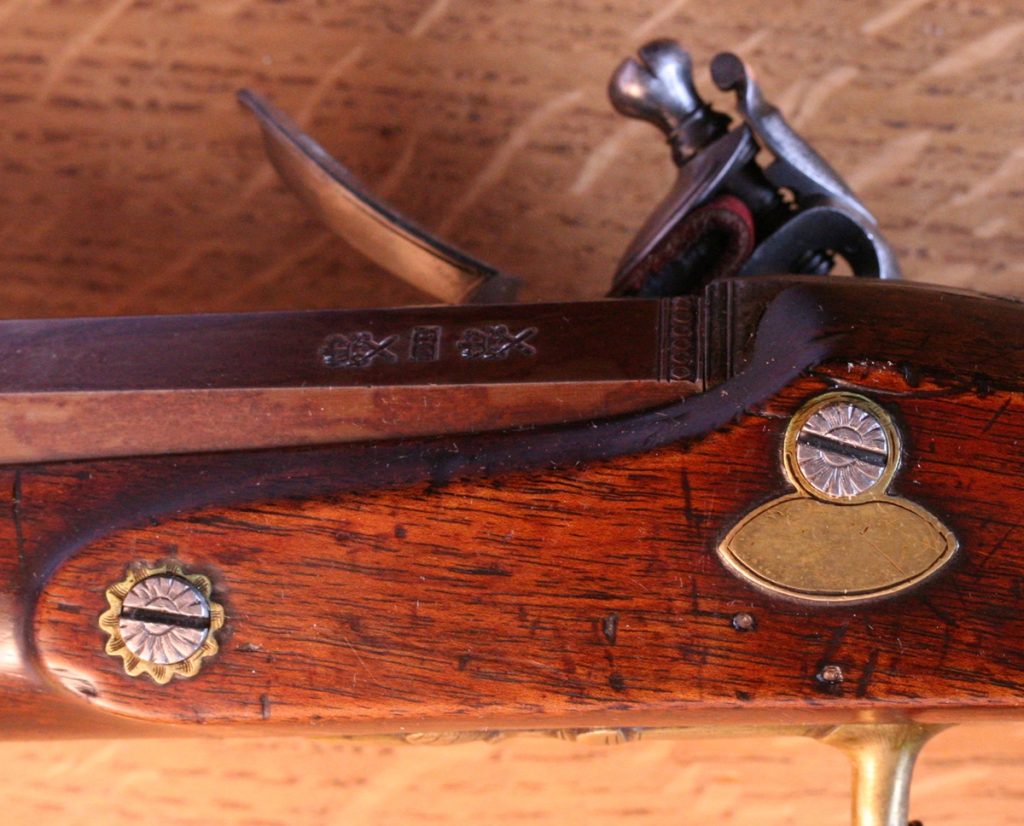 Side plates – they look OK – the screws could be original or possibly replacements made to look old. 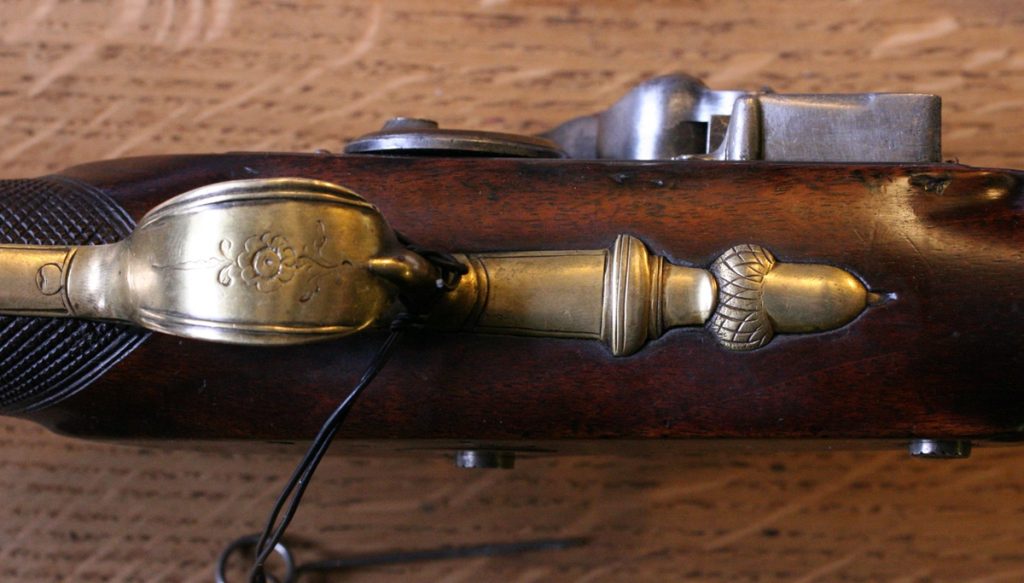 The tang of the false breech look fine – the LONDON in script on the barrel  is a bit too crisp – not quite right?

What is the barrel made of  – its got no twist .  Around that period Twigg was using a shell carving  round the tang on most of his output.  The chequering is also too modern, it would have been  a much wider pattern? 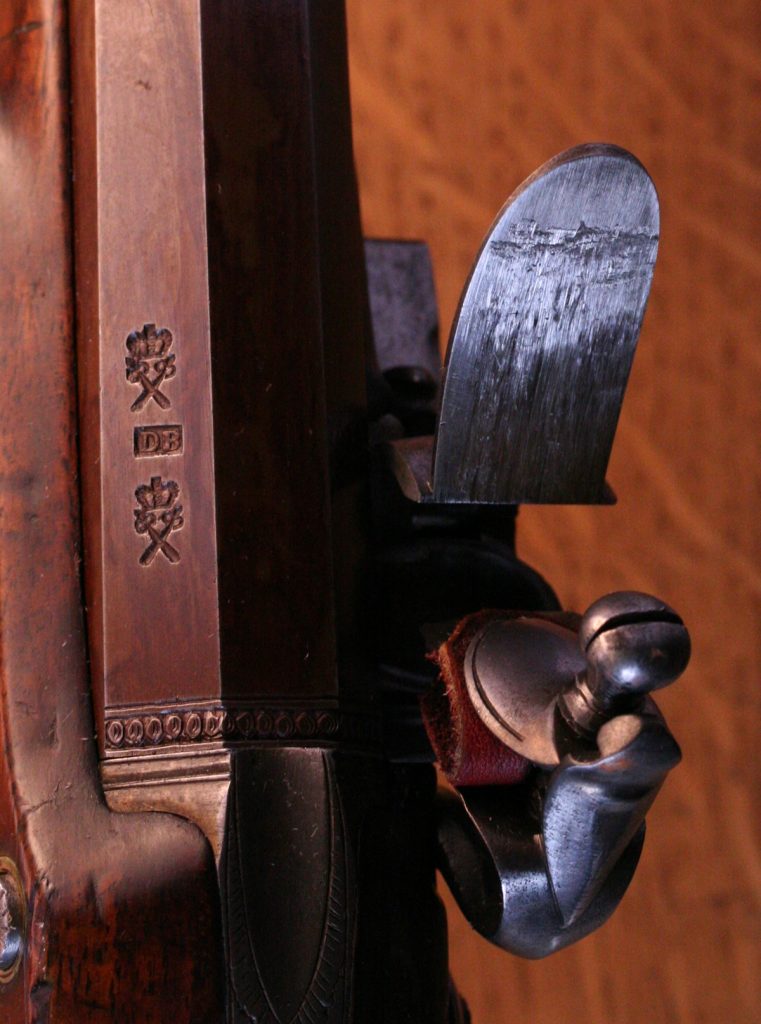 What are these proof marks doing on here on a visible part of the barrel ? And  crossed septres are Tower (London military proof) marks – 2 used together signified a private proof at the Tower.  But these look pretty sharp?  As does the DB stamp.

The inlaid cross is typical of Twigg and Bass around the 1780s but usually diagonal to the barrel, and gold not silver? 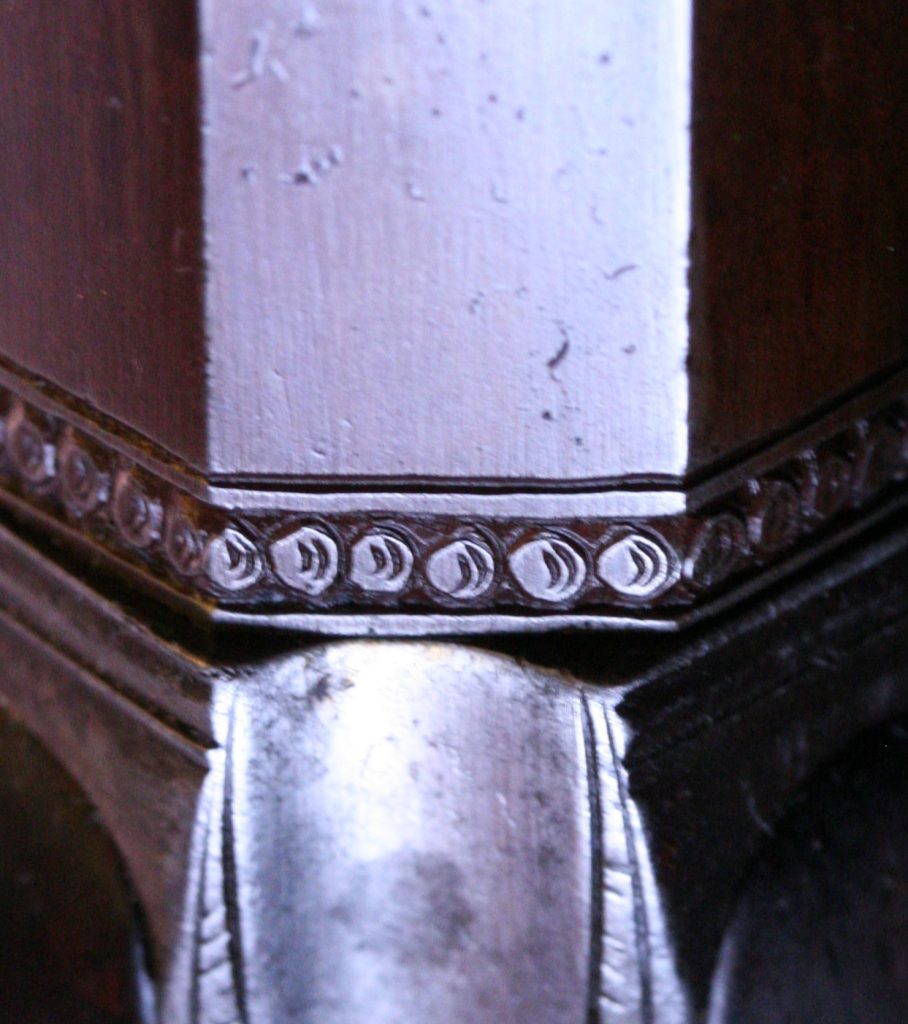 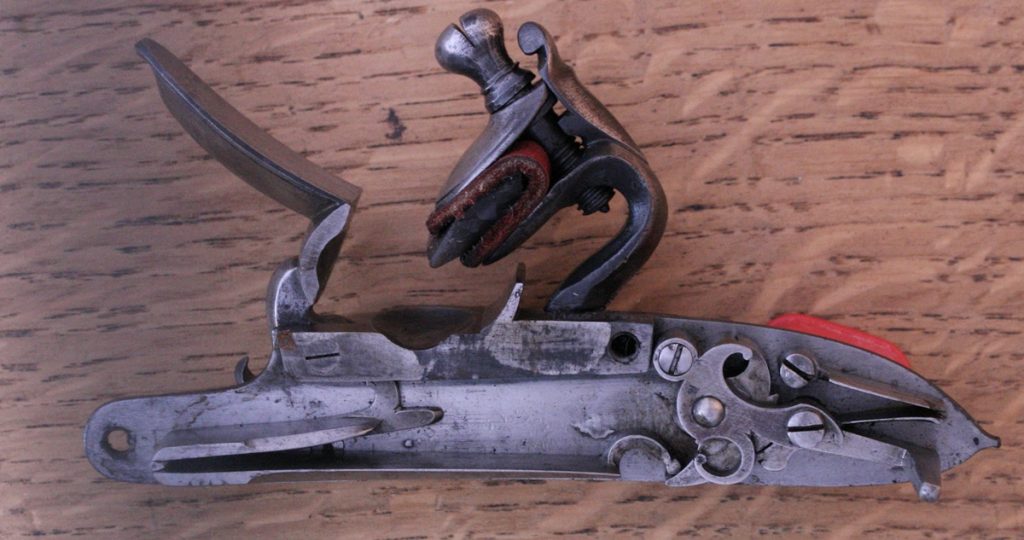 The mechanism matches other locks used by Twigg, and there are no obvious signs of a re-conversion to flint but some gunsmiths are very good at it so I wouldn’t want to bet – still it works very well!

So, what do you make of that lot?  Almost certainly quite a bit of it is genuine antique, but how much has it been messed around with to bring it to its present state, and did it or any of its parts ever go anywhere near Twigg in their life?    What was it originally, and was it a mistake to sell it as an antique or should it be a section 2 firearm ? ( its now on my license as I shoot it)

Here are some of the things that might help put very approximate date on the various bits of the gun, or at least when they were most common;-

G) No roller on frizzen spring or link on mainspring – before about …………?

If you can fill in all the missing dates you deserve a medal ( or are an expert)!

Hint – some of it is on the GUN DATES tab

BE WARNED….  I am reliably informed that one gunsmith has over the past few years reconverted over 1000 guns from percussion to flintlock, and I know several others who do it – most of these guns will eventually be sold as genuine flintlocks.  Some are extremely difficult to detect, but do not have the intrinsic value of  either the original percussion gun or a flintlock!  I always put my name  and date on any reconversions I do, and I only do them on guns that are scrap or incomplete, but I’m not sure I can always detect an expertly done job……..