Here is a rather ratty New Land pattern pistol with Birmingham proof marks on the barrel and a safety catch I haven’t seen before – which is not surprising as I haven’t really got into military stuff, although I seem to have few by accident!   Obviously the breech block was made for the percussion conversion,  but were New Land patterns made with Birmingham barrels or was the barrel new with the breech block at the time of conversion?

See later on in the post for full details – this was one of a number of flintlock New Land pistols taken to Hanover after Waterloo in 1815 when George III’s Kings German Legion was disbanded and transferred to the Hanoverian military. the pistols were used and stored until 1838 when they were converted to percussion and issued to the Hanoverian Artilliery

This New Land pattern  has a clever safety bolt – the main purpose of the bolt is that it blocks the cock very securely from hitting the nipple but holds it fairly close so that a cap on the nipple cannot come off but cannot be fired, even if the pistol is dropped on the cock, until the pistol is put on half cock – some way back from the bolted position – and the bolt withdrawn.  The bolt has a spring fixed within the false breech acting in one of two grooves in the underside of the bolt so that it is firmly held in the lock or the free position.  This means the pistol can be carried with a cap on the nipple and the cock let down onto the bolt in complete safety – it can then be fired without having to fumble for a cap – put it on half cock, move bolt to left, full cock fire……   Clever and safe!

See later in post for the full history, and for restoration details……. 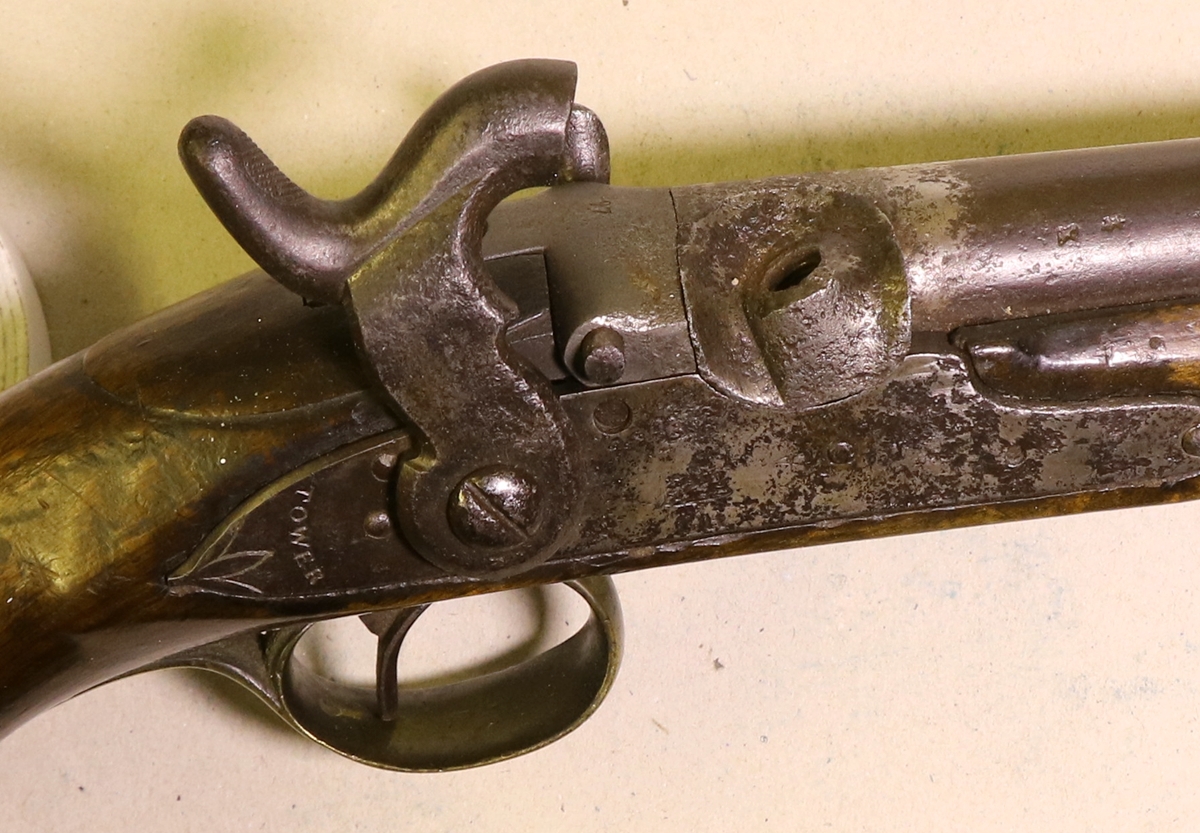 The safety bolt through the breech block has a strong spring detent within the breechblock.

This may well be the history of  the conversion..

As early as 1820, attempts had begun in Hannover on the percussion of the long-range weapons, which, after successful completion in 1832, led to the introduction of the percussion system in the rifles and rifles of the infantry. The aptation of the firearms for the cavalry, the pioneers, and artillery, however, were still to come. The conversion of these weapons to the percussion firing began only in the year 1842, at least at this year already corresponding patterns were present.

The pistol of the Hanoverian artillery brigade, presented here, had not been aired until 1844. This pistol type was originally – still in the stone lock version – the standard weapon of the cuirassiers of the Hanoverian army, which, in addition to a Pallasch, also led two of these smooth pistols. When, from 1815 onwards, the Crause weapon factory in Herzberg delivered the special Cuirassier pistol M 1815, which was to replace the previously used English pistols New Landpattern, these pistols were returned to the mounts of the Hanoverian artillery.

The conversion to the percussion system in the Crause weapon factory in Herzberg near the New Land Pattern pistol was quite complex. On the one hand the old tail screw was removed and a piece of the barrel at the rear end was cut off. Then a tail screw with an integrated Pistonsockel and a hook at the end screwed. In addition, a base with a receptacle for the hook of the patent tail screw and a transversely displaceable securing pin was installed. In the inserted state, this pin or bolt blocked the specially designed percussion tap in the damping position, the position of the tap being such that a primer placed on the pistol could not fall off.

In addition, a brass plate was installed at the entrance to the ladder hole, which was fixed to the underside of the front with six screws. This was used to prevent the shaft from tearing out at this point during the insertion of the hinge load plug.

This total conversion was documented on the one hand by the gun factory insofar as it involved a continuous diary number, which served as a basis for invoicing, on the run, patent bolt and basement. In the end, the acceptance of the correct changes was confirmed by an inspecting officer of the Hanover State of Hanover by taking the sign “R” for “revision” on the patent tail screw.

The “ABB58.” Troop stamped on the lock plate of the pistol documents that the pistol, as No. 58, belonged to the second riding battery of the Hanoverian artillery brigade. There they were presumably led by a mounted crew service until the dissolution of the army of the Kingdom of Hanover after the Battle of Langensalza in 1866.

Dark walnut full-length with brass fittings, consisting of a brass plate reinforcement attached at the beginning of the ladestock bore and fixed with six screws, half front end cap, trigger with front and rear extension, piston cap with laterally pointed spurs and s- In the shaft wood flushly inserted lock plate. Aptoped percussion lock with corresponding, typical Hanoverian percussion faucet. Round barrel with a patent tail screw without a sighting device. Iron oval horn on the barrel, 19mm behind the mouth. The locking pin which can be displaced transversely to the running axis and blocks the cock in the dammel when inserted. Run / shank connection by cross-screw and a slide with eyelet on the underside. Iron Ladestock with large head in the hinge at the bottom, 5mm behind the mouth. Non-rotatable, iron catch strap eyelet on the piston cap.

Dark walnut full-length with brass fittings, consisting of a brass plate reinforcement attached at the beginning of the ladestock bore and fixed with six screws, half front end cap, trigger with front and rear extension, piston cap with laterally pointed spurs and s- In the shaft wood flushly inserted lock plate. Aptoped percussion lock with corresponding, typical Hanoverian percussion faucet. Round barrel with a patent tail screw without a sighting device. Iron oval horn on the barrel, 19mm behind the mouth. The locking pin which can be displaced transversely to the running axis and blocks the cock in the dammel when inserted. Run / shank connection by cross-screw and a slide with eyelet on the underside. Iron Ladestock with large head in the hinge at the bottom, 5mm behind the mouth. Non-rotatable, iron catch strap eyelet on the piston cap.

I hope I am not a little late, but here  are my hints.

1. When the Wellington  army defeated Napoleon in Waterloo, there was the KGL with him. The KGL as the reminders of the old Hannover army build the Corps of the new Hannover army. They brought with them the brown bess, the new land pattern pistol and the paget carabine.

In1816 the KGL was desolved, the new army was build. To beccome more indipendent from the british arms industry, a new pistoltype was dwveloped. The pistol as here usual was always given out in doublettes, marked a and b. Carabines for the horsemen were not longer used, instead of cavalary pistols with stocks. So a cavalery man had always two pistols but only one stock, which was used with the two pistols.

2.When the percussion aera came, there were lots of parts of old flinlocks in the Herzberg faktory. So beginning with 1838 there are three types of Hannover stock pistols.

Pistols made from origonal flintlock pstol.

New made prkussion pistols, with a slant new lock.

3. The stamping on your pistols means:

A B  64 A ArtillerieBrigade, 1. Battalion, Waffe 64 (  Artelleriebrigade, first battalion, gun number 64. gunner had only on pistol, so not a or b)

5. The number 163 on the Hannover pistol is the Produktion number from the Herzberg faktory.

6. When in 1866 the kingdom of Hannover was incorporated to Prussia, the Hannover army, so not defeated hold their arms. They could take them home, if they were not willing to serve in the prussian army, or if they served in the prussian army got equiped with realy modern arms as the prussian needle  gun, which made the victory against the austrian army, which still used the old Lorenz muzzle loaders( austrian enfields).

The Equipment of the Hannover army was sold to the sha of persia. So many Hannover pistols you can by are in pityfull condition,

RESTORATION
Mostly the stock – damage around the butt – partly repaired already but not finished, and a chunk missing around the barrel bolt where someone pulled out the bolt and the pin and a chunk of wood at the same time, plus some of the wood looked as if it had the pox  – raised pale spots as if drops of water had swelled the wood and then become permenant – I would have preferred to leave the finish completely but these really did look odd and on balance, since I had to remove some of the finish to repair the stock, I decided it was OK to sand them out, taking out as little of teh finish as possible. I tried to photograph them but you can never see defects when you try to photograph them, but when you want a picture to show what a good repair you have made they always stand out a mile!  Anyway here are some pictures of progress…. 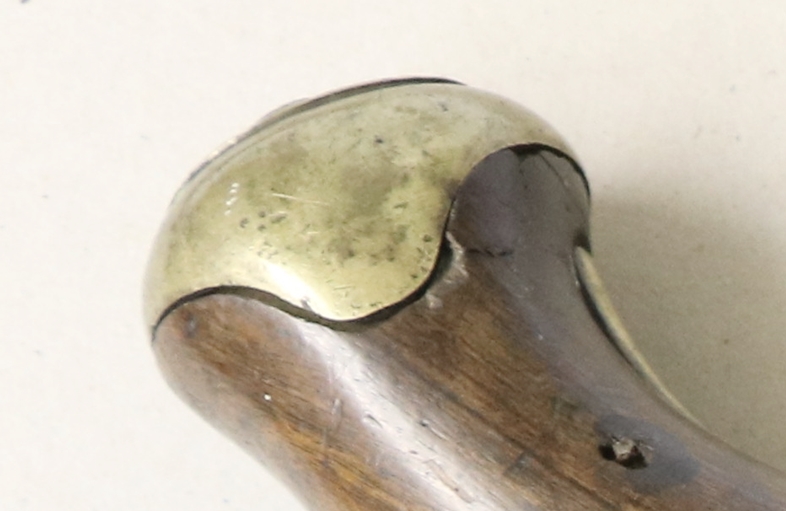 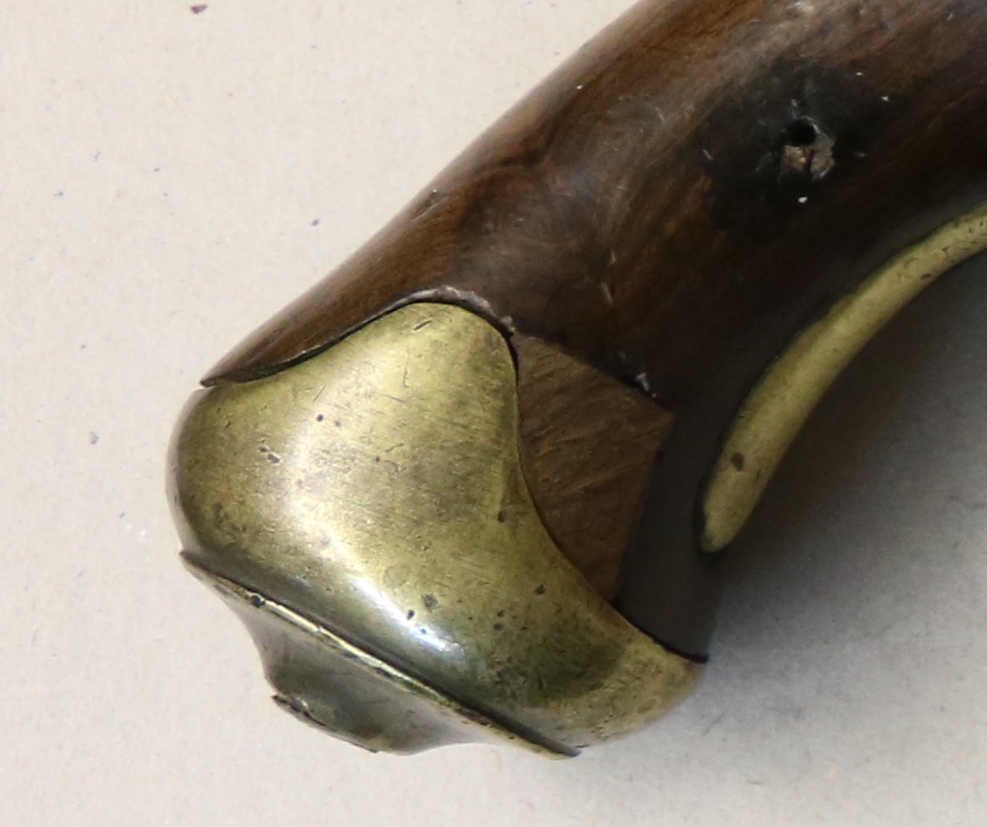 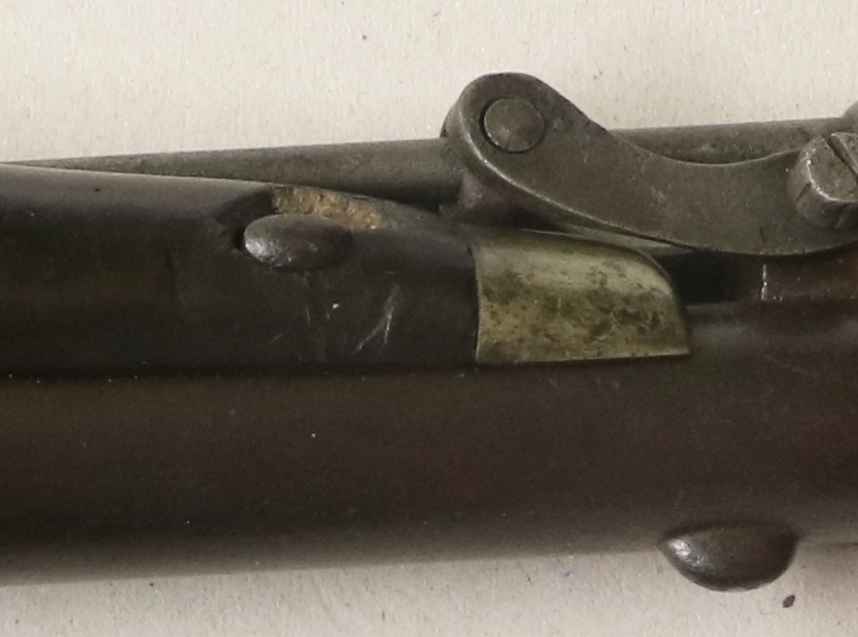 a lot of the ‘wood’ around the damaged area is actually soft filler. 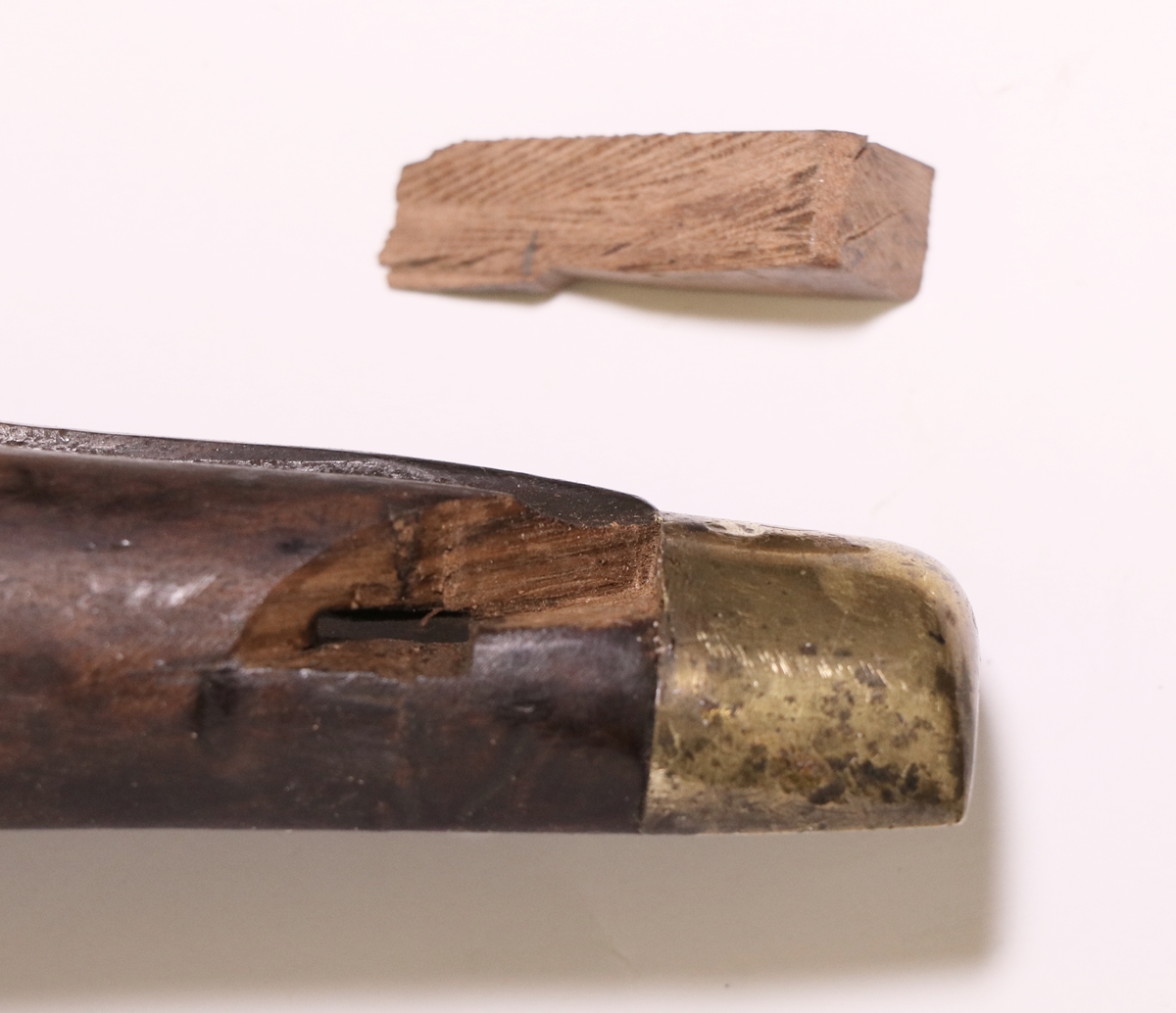 All cut back to good, straight surfaces 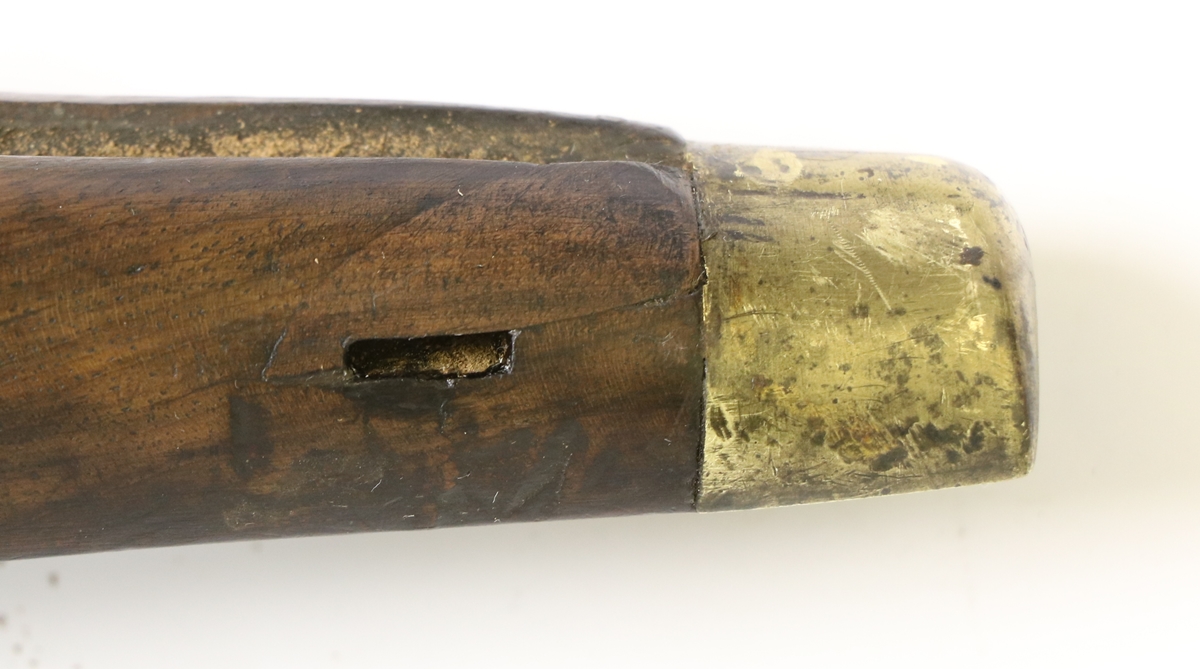 You can see that I got a slight kink in the profile of the edge of the ramrod groove – photos are very unforgiving!  Its partly because they are magnified and partly because you see it in 2D and different aspects strike you – anyway I have now corrected it!   It needs a little more colouring – mostly black ‘Sharpie’ to blend in with the rust stains and blend in the joints. I’m pleased that I got it shaped without damaging the finish on the brass fore-end cap as its difficult to  make brass look right and it would be too disruptive to take it off.   A wipe over or two with shellac will restore the finish – I used a spirit dye in ‘english walnut’ and ‘jacobean oak’ for colouring – put on with a brush and wiped off with a finger – my finger tips are now stained to match the stock!  The slot for the barrel bolt probably looks a bit too sharp, so it might get a bit degraded…..   – its all about getting everything to an even state so nothing looks out of place, by either being too sharp or too rounded….

Later on in the renovation of the woodwork… 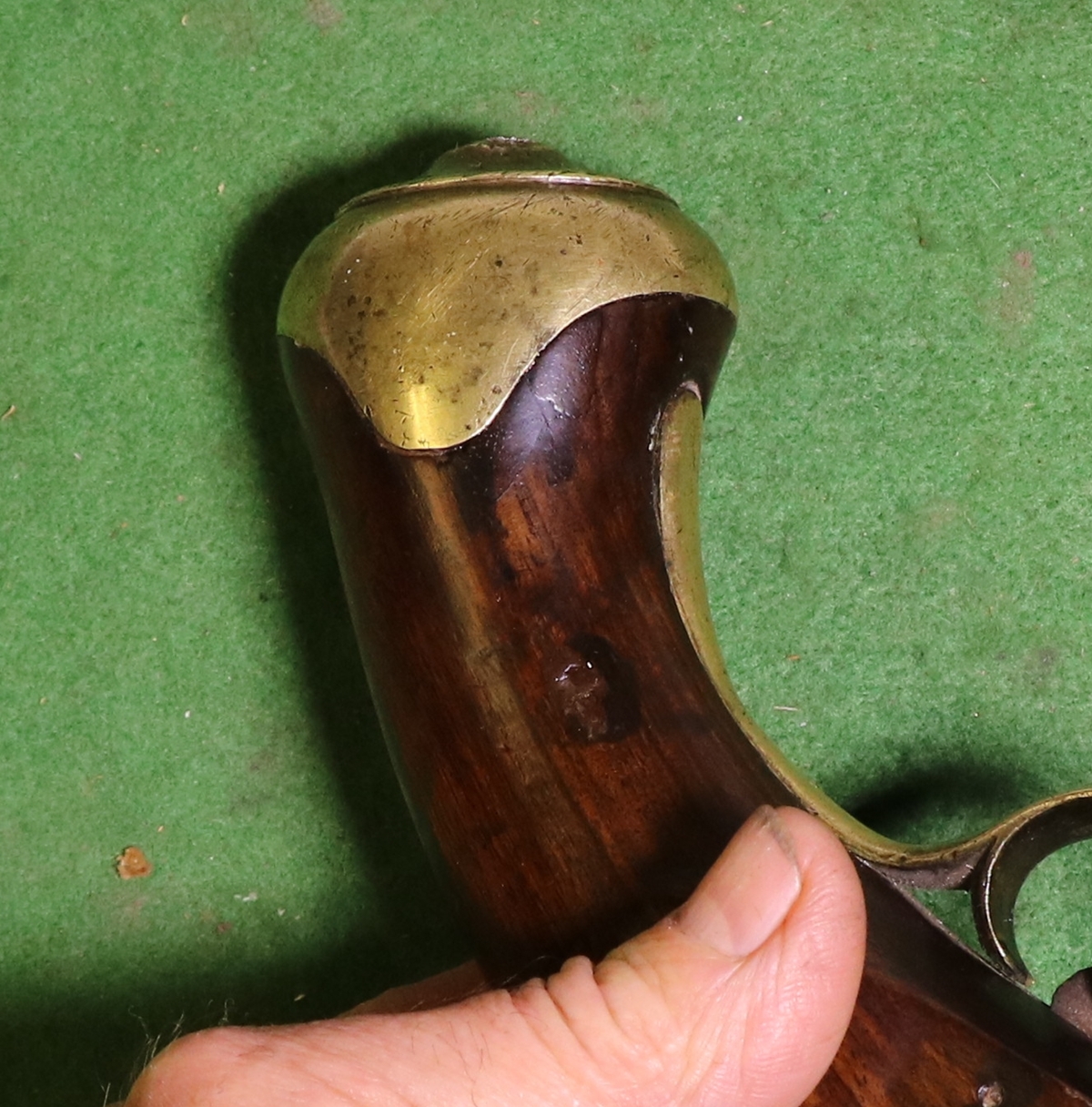 I should probably tone in the light patch!  – the job is never finished, there is always something that will make it better, and the better it becomes, the more things are exposed as needing attention – the danger is that this can lead to loss of integrity in the piece, as happened recently to an old blunderbuss whose owner wanted it to look ‘good’, and it did, in a brash and sterile way, but along with all the irregularities and dings and dents it lost all its patina and authenticity and I reckoned knocked £1000 off its value!  Not, I hasten to add, my work. 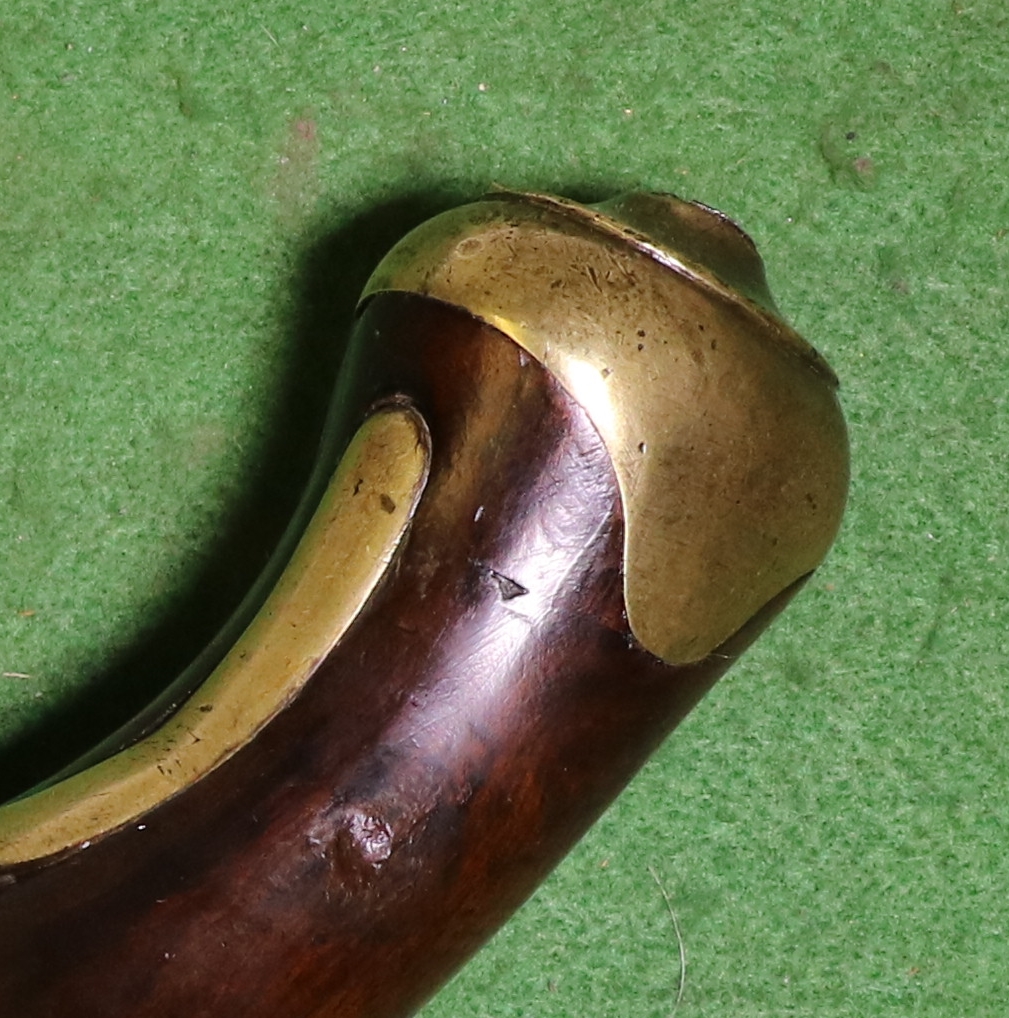 The little pit on the joint will get filled with hard wax. 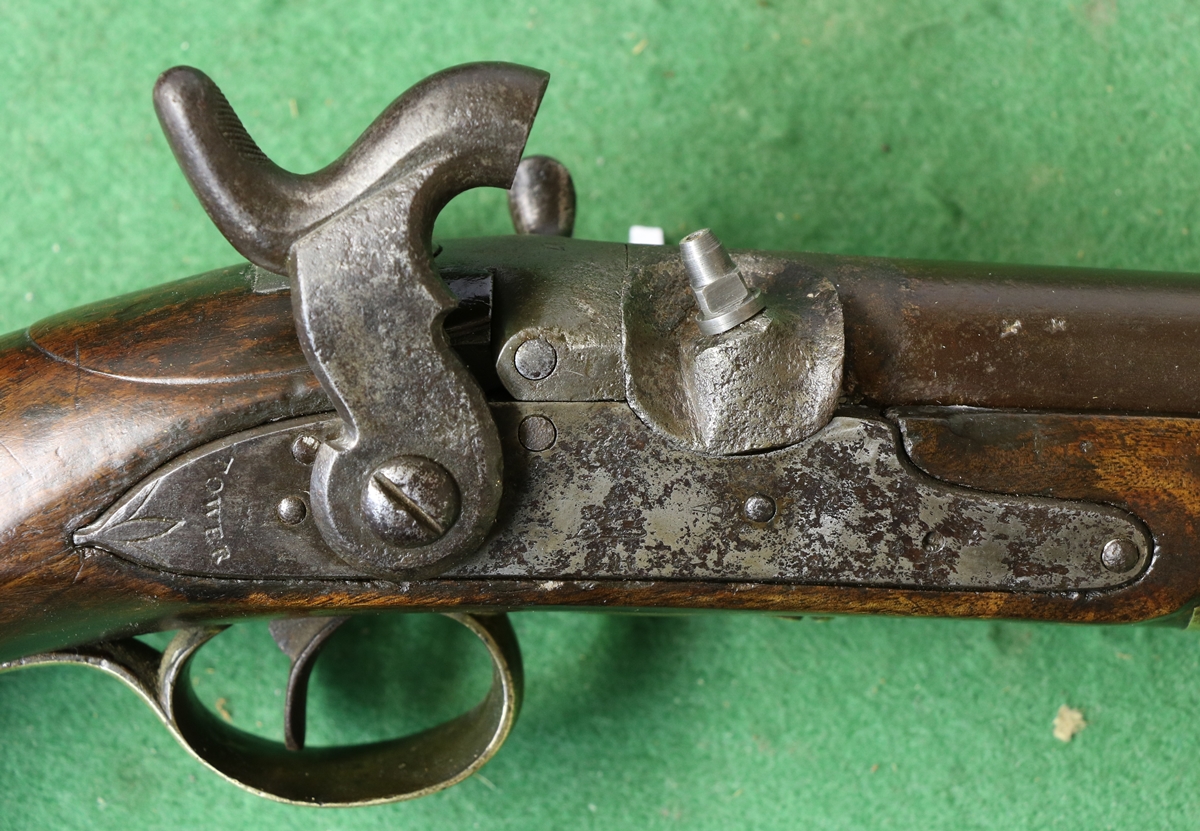 And  finally a new nipple.