Having made a case for a double barreled flintlock coaching pistol I thought I’d put  post on it using bits from the diary and some additional hints and tips. 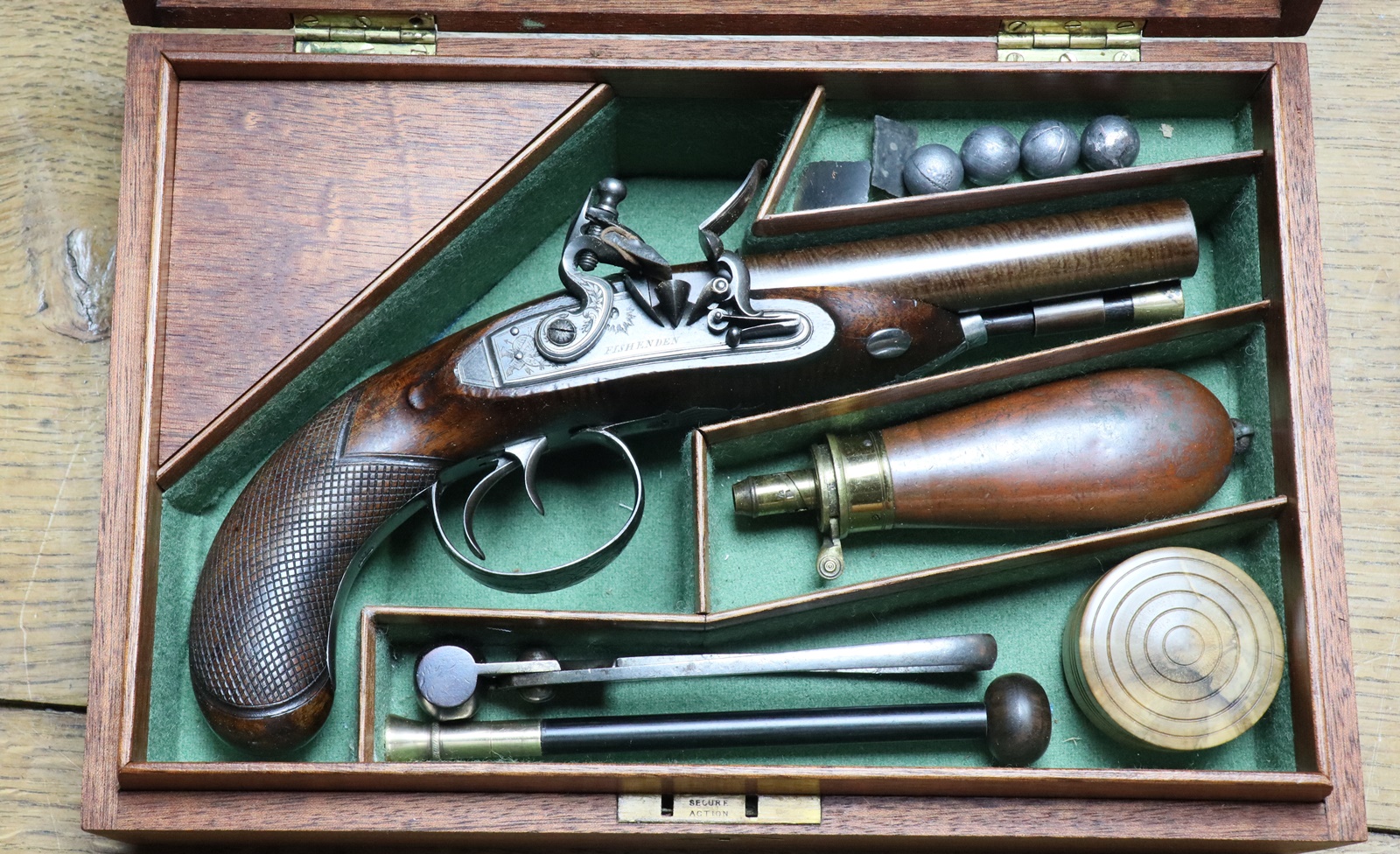 This case is unusual as its rare for a single flintlock pistol to be case – almost always flintlock pistols came in pairs – at least from about 1760 to 1850, and it wasn’t until the percussion revolver era post 1851 that single percussion revolvers pistols were commonly cased in oak boxes with brass screws visible on the top.  prior to that it was usually pairs of pistols, most commonly duelling pistols in mahogany cases.  _ See Keith Neil and Back’s book on Trade labels and cases.

Mahogany – fairly fine grained , for pistols and long guns up to around 1850.

Oak – light yellow in tint – for single percussion revolvers from ?1851.

The carcass of almost all old cases used open  dovetailed joints – the joint provided the strength as there were no good glues.  These joints were cut with very fine ‘pins’ – on the outside edge of the tapered pin they were often no more than 1/16th of an inch  thick – they were, of course cut by hand and they still need to be as router cutters can’t do such narrow pins – dovetail cutters for doll’s house furniture are not long enough and regular cutters have too thick a shaft.  Cutting such narrow dovetails by hand requires a saw with a very thin ‘kerf’ (cut thickness)  – certainly no bigger than 0.5 m.m. – I use a Japanese pull blade with a kerf of 0.3 m.m. – a fine tool for the job.  The bottoms of the cuts is best done with a very fine blade in a fretsaw.   We can of course use modern glues to disguise our imperfetions – but that is really cheating!  Cutting fine dovetails by hand is very satisfying.

These can either be fully covered with cloth, or they can have a  strip of wood showing at the top ( probably about 10 m.m. deep) with the cloth stopping in a sloping groove as for the lining strips. They are usually glued in wth animal glue and may also be pinned through the base.  Sometimes in better cases they are fitted into slots cut in the lining strips.

It is normal for the inside base of the case to be  covered in one piece of fabric (baise) fixed down with animal glue before the partitions are put in place, and the lid is similarly covered inside.   Traditionally animal glue was what was available – basically collagen that melts and absorbs water  at fairly low temperatures ( 60C ) and sticks within 10 minutes of so.  It has the advantage that joints can be taken apart with steam and patience.

2 Responses to “Making a Pistol Case”