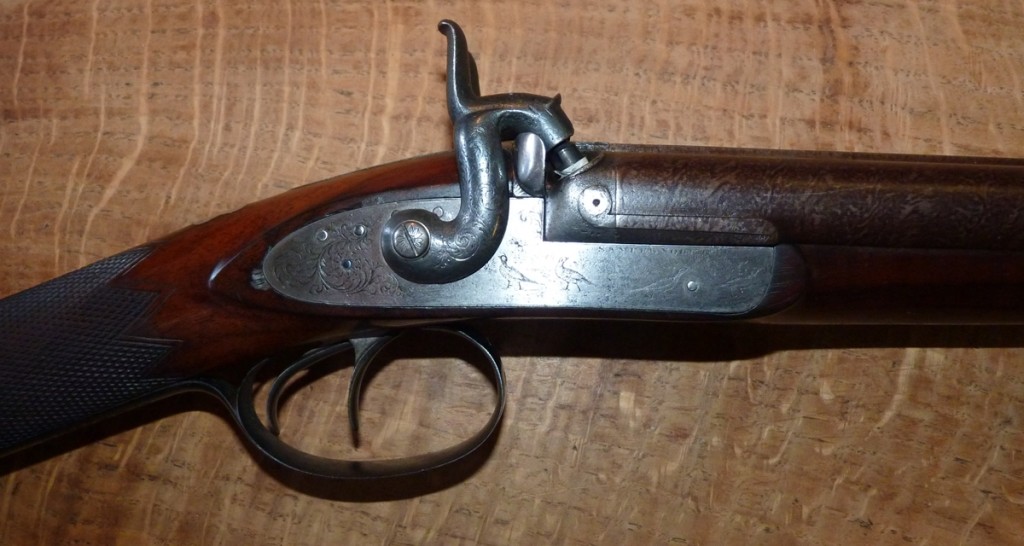 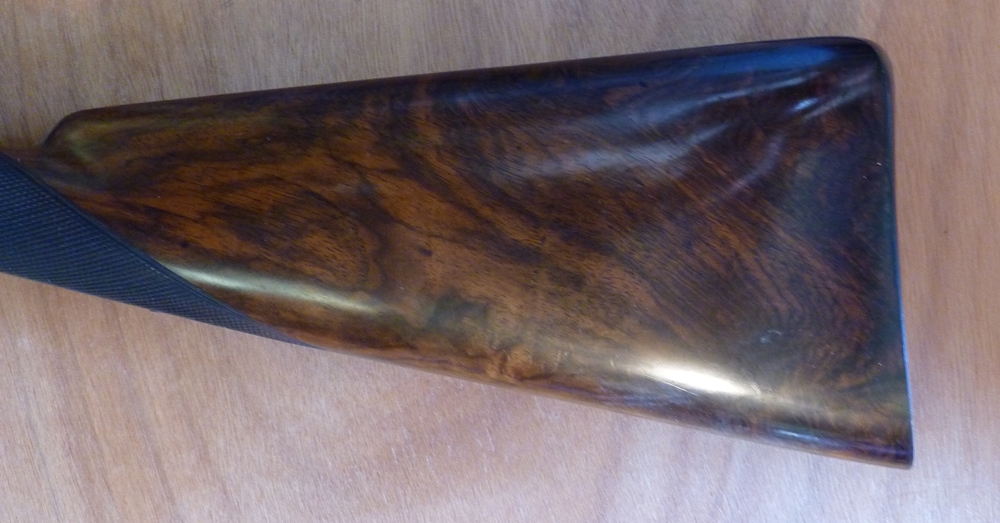 This Samuel Nock was obviously a high quality gun to judge by the stock figure.

I then found that the half cock notch on the left side wasn’t secure which is very dangerous, so I did a bit of welding on the tumbler and reshaped the notches, but when I fired the right barrel the left  fired too.  I annealed the left tumbler and deepened the full cock notch so that it had a 4 to 5 lb pull off but today it still fired when the right barrel fired so I shot the day cocking one barrel at a time.

Here is the tumbler and sear that is giving the trouble – you can see that the half cock bent is properly re-entrant now and can’t fire however hard the trigger is pulled – the sear pivots around its pin, so the contact movement is on a tangent – looking at the detail the full cock bent look fine and its face at the correct angle and the trigger pull is sensible, so why is it letting the cock down when the right barrel fires?   The arm of the sear is pretty close to the edge of the lock plate, so the lock pocket had now been eased to clear it to make sure that isn’t the cause of the problem – further test due.  The trouble with having to work on the tumbler is that each time it has to be annealed and then hardened when finished – I have been using fretsaw blades as welding rod for the TIG building up, and also put a bit of case hardening powder on the bents when I harden them.  Each time you go through the cycle you loose a surface layer of metal that oxidises – I ought to get some suitable coating to mask the surface. 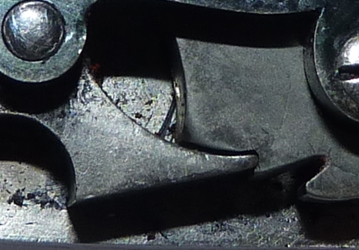 It all looks fine so  I  put it all together and tried hitting the gun with a rubber mallet in various directions to simulate firing, but can’t get the left lock to fire.  Nothing for it but to go out to a field and try it, which of course means cleaning it afterwards……    I’m going up to St Andrews for the Scottish Nationals at the end of the month and this is my best gun, so its got to be right!   Tom, he of the helice picture above, is in St Andrews so will be joining the Anglian Muzzle Loaders for the competition – I’ll have to sort him out a gun as you can’t share with muzzle loaders because of the time it takes to reload.

In the afternoon I tried the single barrel gun I rebuilt – see below – having had Dave Becker, stocker, move the cast-on to a very slight cast-off ( a few mm), but I didn’t get much joy from it and it does have quite a kick with 2 1/2 drams and 1 oz* as it only weighs 5 1/4 lbs, so I rapidly tired of  missing with it and reverted to my (actually Tom’s) Beretta for a bit of relaxation – still missed quite a few but at least you don’t have to work so hard for each shot!  I did achieve one notable success – having missed the first of a simultaneous pair I then broke both clays with the second shot – some people, notably Tosh, thought that it was a lucky fluke but I know better.

* This evening I was getting ready to reload some black powder 12 bore cartridges for the hammer gun shoot in Scotland (I’ll use my bolt action Baker’s Patent double 12 – 1874 – Playfair of Aberdeen), so I checked out the throw of my vintage shot flasks – now I am sure I’ve checked them before but they are throwing massively over the indicated weight – the flask I was using with the single was throwing  just over 1 1/2 oz- so no wonder it kicked!  The shot velocity must have been a bit low. Even the flask I had been using in the morning was throwing 31 gm on the  1 oz setting. I even opened a 12 bore cartridge to use the shot as a calibration of the electronic scale.  An old fixed measure I’ve got throws correct weights with small shot, so I don’t know why the shutter flasks are so inaccurate.  Clearly I’ll have to sort this out and get a reliable measure or vials  (28 grams = 1 oz).  I also checked the throw of my powder flask by weighing 10 charges – and found that the 2 1/2 dram setting gives 2.6 drams, depending how flat your finger is across the top it can go down to 2.5, so OK.  ( there are 16 drams in an ounce – – so 25 drams = 44 grams or 1.56 oz.  (  1 Gram = 0.56 Drams,   1 Dram = 1.77 Grams,  16 Drams  = 1 Oz.,  1 Oz = 28.35 Grams)

Update 18/5  have just been up to the field to test the Samuel Nock again – its now OK – left barrel stays on full cock when the right is fired and v.v. so I guess the wood was not letting the sear engage properly.  Anyway I put up a load of pigeons from the trees – must have a go at them some time as I’m partial to pigeon breast.  I found a couple of bits of old ply faced foam on a dump at the field so I used them as a pattern plate at about 25 yards  – it throws a good central pattern but with quite a few outliers – looks as if it would have plenty of room for clays to escape at 40 yds.   But it comes up and shoots perfectly spot on, so no excuses for not breaking clays!