My latest project is engraving a gun that a friend Allan Owens has just finished.  Allan has built a number of punt guns before, including the restoration/rebuild of  the famous ‘Big Tom’, and this is his 15th gun, and I believe his first non punt gun.  I was a bit reluctant to cut my engraving teeth on his beautiful new gun, but he insisted, so I’ve got to do it!   Yesterday a parcel of the smaller parts arrived  – we had already discussed what style of decoration was appropriate, and agreed that it would be a very plain gun – I’ve got the lock design sorted, and am working on the rest, but while it is still waiting the first touch with the graver, here are some pictures of the gun.

So far I’ve fixed the parts onto blocks so that I can hold them in the engraver’s vice without marking them – no need to glue them down as there are enough screw holes. 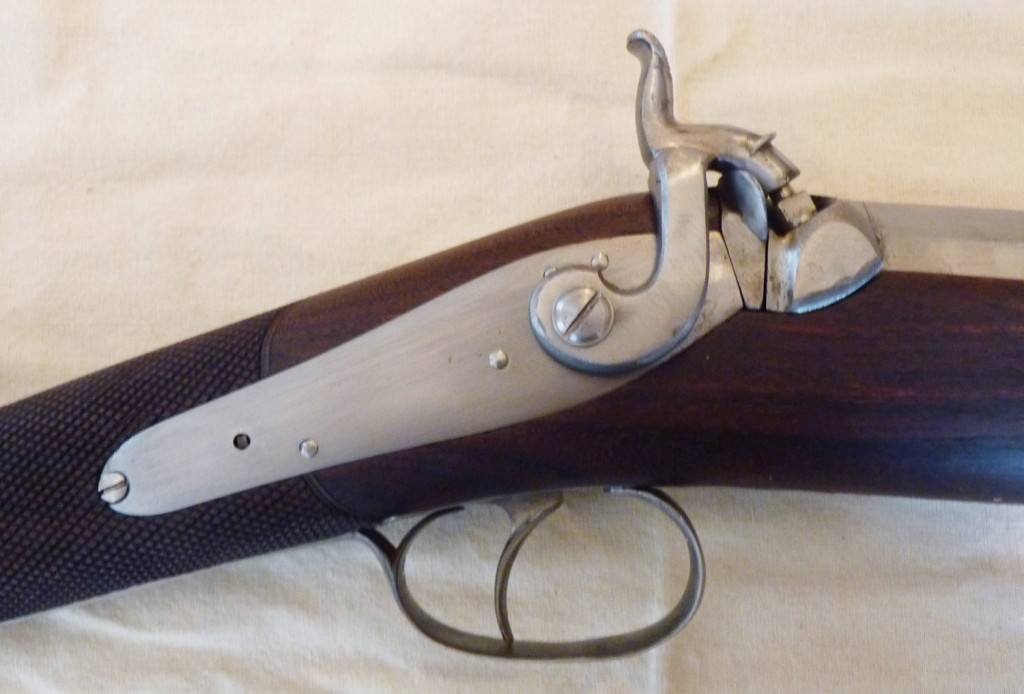 Allan’s gun in the white 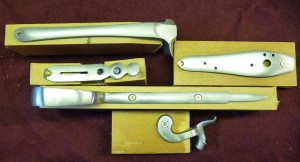 I’ve now done the furniture and lock – just the cock and barrel and breech block to go.  The trigger guard was a particularly tough bit of metal, but it was all hard going.  I find it hardest to engrave highly curved surfaces as rapid changes of angle are difficult to follow and quite difficult to see under the microscope I use. There is very little tolerance on the angle the tool makes with the surface for a controlled cut – too high an angle and the tool just digs in, too low and it skids off and makes a gouge somewhere it isn’t supposed to – sometimes if it just scores the metal with the heel of the tool you can burnish it back, but if it really cuts there is no way out…..   I must have sharpened a tool for every  3 to 5 minutes of work, I have about 10 similar gravers in use, and I sharpened them all 10 or 15 times in total.  Sometimes the point or edge goes after cutting an inch of a border, and its fatal to carry on once the edge has got too rounded as you are bound to slip and make a gouge.  In fact for anything but the finest line there is almost a sweet spot when the tool has ‘bedded in’  but not yet worn up the sides of the cut – doesn’t last long though .

Trigger Plate – I signed it in a place that will almost be covered by the trigger guard.   I quite like lightly cutout backgrounds… 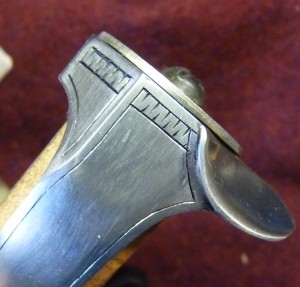 The false breech needed something  simple and geometrical to finish it off.

Of course, when I came to do the engraving a horrible truth occurred to me – plain simple engraving with just borders and a few simple features exposes all your weaknesses! Its much easier to cover up slips and mistakes in among a swirl of scrolls and decoration – so its a good test.  I still have difficulty with fluid curves in this tough material – the tool doesn’t keep its edge long enough to complete one curve – maybe I’m doing something wrong?  Must go and get a lesson from a real engraver!

Not a very good photo of the finished barrel ( I’ll do a better one in the daylight) – but I’m relatively happy with the overall  result.  I look forward to doing a gun with a bit more decoration – maybe I’ll have to build one myself!   This week Allan is going to put the gun together and shoot it at the Cambridge Gun Club, so I’ll get to have a go too!