The first question is ‘why would you want to make nipples out of titanium?’   I guess the answer ‘ because its there’ isn’t really adequate!  I like it for several reasons – T5 is very tough and doesn’t deform when hammered by the cock, it is  completely corrosion resistant as isn’t marked by the cap composition or black powder residues and it doesn’t get ‘gas cut’ by escaping gas past the thread – plus it looks distinctive and I find it as easy or easier to use than a steel of adequate carbon content.  I’ve made lots for myself – almost all my shooting guns have titanium nipples, and I’ve made a number for clients and friends and haven’t had any negative comments.. As with steel nipples, I always wrap the thread with PTFE pipe tape before inserting the nipple. 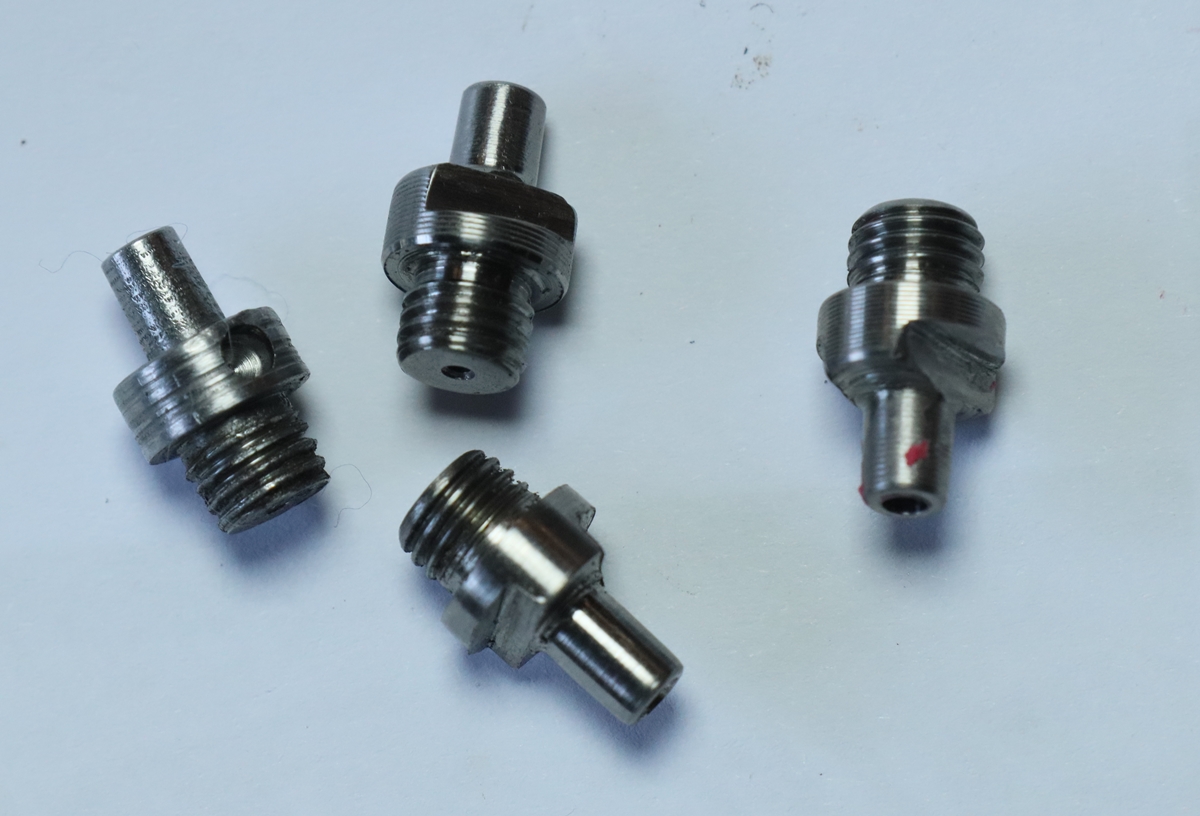 The one on the left is made from silver steel  – its a bit of a mess, the rest are titanium – much easier to make!

All nipples are not born equal!  Most don’t follow the current trend for small holes at the bottom – old caps were more powerful so it was probably less important.

WARNING:-  I do NOT recommend that you make nipples for a gun that is going to be shot unless you are a competent engineer and understand the risk attached to a nipple blowing out – a detached nipple is effectively a bullet out of YOUR end of the gun!  Always proof test any gun/nipple combination remotely.

Caution:-  Titanium burns and can be ignited during fierce cutting – only special extinguishers will put it out.  Swarf is usually continuous and sharp and very strong. Stop the lathe  often to remove swarf (use a paper towel to avoid cuts if necessary) and put in a metal bin.  If you start a titanium fire and don’t have a special extinguisher use sand.

Advice:- When cutting do not stop the feed with the tool in contact with the work – retract it before you stop the feed – or you will leave a mark and likely work harden the titanium. The same goes for drilling.  If you use coolant, flood the work to carry away heat, otherwise I use oil to drill small holes – any smoke acts as a warning.

I was looking on the web at comments on turning and milling T5 titanium and I realised that in my ignorance I had got on much better than the comments would suggest!  The only thing I knew before I started was that titanium swarf burns with intense heat and is difficult to extinguish – impossible with water.  I know that because we had a fire in swarf on a lathe in a workshop I was responsible for many years ago.  We called the Fire Brigade who unreeled their hoses until we told them titanium and water didn’t mix – in the end they took a bucket into the grounds and dug up some sand.  Titanium T5 bar ( the titanium alloy of choice) can be found on ebay as reasonable prices for offcuts from production runs in 10 and 12 mm diameters.   The problems with machining T5 titanium are several – its very elastic (Young’s Modulus low) so will deform out of the way of the tool, it work hardens dramatically so if the tool stops cutting and rubs it may not start cutting again easily, and the low thermal conductivity and heat capacity means that very little heat is carried away with the swarf but remains with the tool.   I have made many nipples of T5 and I guess that I have learned how to do it by trial and error.  I can turn it with cheap replaceable carbide tipped tools to get a slightly ribbed finish on the boss of the nipple, or with a sharp HSS tool to get a fine finish, but its difficult to take off very small cuts because the elasticity tends to deform the metal out of the way.  I haven’t had too much difficulty drilling 1 and 2 mm holes up to 12 mm or so deep – if you stop the drill it does work harden but you can break through – it pays to use sharp/new drills – I found that Tracy tools sold Imperial 40 thou drills for £1 each whereas the equivalent metric 1 mm drills cost £3.00 – no contest so I got 5.  I break less drills than when I try to make nipples out of silver steel.  I am fairly careful to splash oil around when drilling and to clear swarf often – pull the drill out and don’t let it idle in the hole or it will work harden.  You need a smooth control on the tailstock thread so you can feel progress when using the 1 mm drill – I can tell even on my big lathe how it is going, and feel the breakthrough of the 2 mm drill into the 1 mm hole.

The most difficult part is putting an external thread on the nipple – you need a sharp HSS die and you cannot have several goes at getting the diameter down – you have to know what gap to set in the die with the wedge screw and go for it – unless you need to remove a significant go in your second try you’ll just end up swaging/work hardening the thread.  It is a pain to try cutting a thread with a blunt die – I used one for some time and couldn’t understand why it was as much effort to back off the die as to ‘cut’ it onto the work!  It is a good idea to turn up a dummy and cut the thread, then part it off and try it  in the breech before going through the whole process so you know how much to open the die.  I have opened dies up so far they break in attempts to get a better fitting thread – I have also run a TIG welder up the outside of the die by a hole to weaken it so it opens easier.  You will find that a standard die doesn’t cut up to the shoulder of the nipple so you can’t screw it in completely – you need to grind up a small tool (or use a parting tool) to undercut the thread at the top slightly.  You can also grind out surplus taper on the face of the die to let it cut a bit nearer the shoulder, but you will almost certainly still have to undercut with a tool.  Make sure that you get the thread length right by checking the depth of the hole in the breech and any nipple you removed from the gun – if you make the thread too long it will be the devil’s own job to shorten it once the nipple is finished, and if you make it too short you will be loosing security in the thread – try to get the bottom edge shaped to match the bottom of the hole if you can.  Having got the initial turning and threading done the nipple is screwed into a bit of tapped bar in the chuck and the nipple end turned using the top slide set to a taper of a couple of degrees – using the top slide complicates the use of the Digital ReadOut so you have to remember not to touch the leadscrew wheel – I can’t lock the saddle on my lathe unfortunately.  If you are making a slightly oversize nipple it’s a problem tapping the hole in your jig bar – you can sometimes do it by rotating the tap around the diameter at the same time as turning it. Getting the actual nipple to be a good fit in the cap is tricky because you can’t proceed in very small steps, and files are not that effective.  The nominal nipple diameter at the top for a 1075 cap is, I think, 4.20 m.m.   Having got the nipple blank turned I put in the flats with a file while its in the tapped bar in a vice because its too difficult to hold the nipple firmly enough for them to be milled – a file works (slowly!) although it doesn’t quite look as professional as it should.   We, the Anglian Muzzle Loaders, reckon that the most reliable configuration for a nipple is with a 1 m.m. to 1.2 m.m. (40 to 50 thou)  hole in the bottom extending 4 or 5 mm up the threaded part put in before bothering to cut the thread in case the drill breaks off in the blank, and a 2 to 2.2 m.m ( 80 or 90 thou) hole down from the top as you shape the actual nipple end.  If you use the tailstock wheel to advance the drill you can feel when it breaks through into the 1 m.m. hole and can then put the 1 m.m drill through to clear out the hole. Most nipples in English percussion sporting guns and pistols correspond to 1/4 BSF thread with 26 threads per inch, although the diameter is often worn somewhat oversize.  The thread profile used in guns is generally quite different from modern threadforms – it has a much lower angle, probably 45 to 50 degrees as opposed to 60 degrees for the BSF and a much more rounded top and bottom to the thread – this means that the thread depth as a fraction of the overall diameter is less, and may mean that modern male threads cut a bit small for the equivalent old hole..  Be aware that the 1/4 UNF is the only UNF thread that DOES NOT correspond in pitch to the equivalent BSF diameter – 1/4 UNF is 28 t.p.i.   The Smiths patent nipples I am copying use an oversize 1/4 by 28 t.p.i (UNF) which is a first for me.  If you have a breech with a very loose nipple you can recut the thread with a tap of a slightly bigger diameter but you really must keep to the same t.p.i.  Fortunately 9/32 BSF has the same pitch as the 1/4 BSF (26 t.p.i) so can be used for recutting those threads and making new nipples.  If tapping out the breech for a bigger thread you will almost certainly need to grind the end of a tap almost flat to cut down to the bottom of the hole – it may need two taps, a plug to start and a ground off plug to finish.